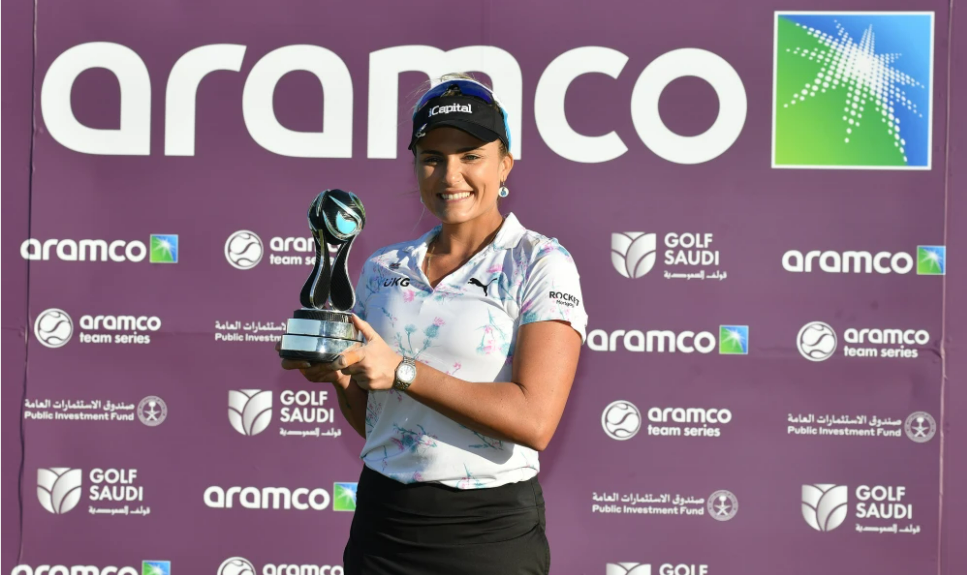 Saudi Arabia’s Public Investment Fund showed it would spare nothing to make sure its controversial LIV Golf Series got a foothold.

Now the focus shifts to a possible women’s LIV Golf series and if a country that continues to discriminate against women will save some of that life-changing money for them.

CEO Greg Norman was asked by the Palm Beach Post in July if LIV Golf would venture into the women’s side.

“One hundred percent. Drop the mic on that,” he said. “We have discussed it internally, the opportunity is there.”

That comment got the attention of LPGA golfers. Some are sending out warning signals to the LPGA Tour.

SPORTS NEWSLETTER: Sign up now to get daily Sports headlines in your inbox

LIV GOLF: Bryson DeChambeau dishes on his diet and why ‘the Incredible Bulk’ is no more

“I think a lot of women they would go because it’s a big difference,” Spaniard Carlota Ciganda said this week from the CME Group Tour Championship at Tiburon Golf Club. “If they are asking you to go to Saudi and they are going to pay you $5 million, what would you do? Would you stay here? Would you go and take the money?

“I understand both points. I don’t think it’s right or wrong. You have some political ideas but at the same time this is our job and if you have an opportunity somewhere else why not take advantage and go.”

Madelene Sagstrom, a six-year LPGA veteran from Sweden, has noted the rivalry LIV created with PGA Tour and the friction between those who defected from the tour and those who have remained loyal.

Sagstrom is not sure the LPGA Tour could survive a similar conflict.

“I think the LPGA will have to handle it differently than the PGA Tour,” Sagstrom said. “We’re a little bit more vulnerable I would say.”

Karrie Webb, the seven-time major winner who lives in Boynton Beach, told Golfweek in June that she fears a LIV women’s league could “ruin women’s golf.” Webb grew up idolizing Norman, a fellow Aussie, but has posted her disappointment in her “childhood hero” .

Following the Palm Beach Post’s report in July, LPGA commissioner Mollie Marcoux Samaan told the London Times “she would engage in a conversation” with LIV if it means promoting women’s golf, but added a there are “a lot of factors to consider” before the LPGA would do business with LIV Golf.

“As a steward of the game, we’re just really listening and learning,” she said. “We don’t know what the intentions are. We’re really just focused on us.”

The golfers’ focus certainly has been on the LPGA and more specifically the $2 million check for this week’s winner. But the disparity in the money on the LPGA Tour compared to the PGA Tour and LIV gets the attention of most women on the tour.

LIV distributed $255 million in prize money and bonuses for eight events this year. That number will jump to $405 million for 14 events next year. The PGA Tour prize purses for a 47-event 2022-23 season will increase to $428.6 million.

The LPGA approached $90 million for 34 tournaments this season. Included is the $7 million purse for this week’s Tour Championship.

World No. 15 Charley Hull of England believes many of her peers would seriously consider a LIV invite if it included life-altering pay checks.

“I think maybe they would,” she said. “I think it would be a very hard one but if the LIV tour did come along and they did offer you something, you’d be mad not to have a look and consider it.”

LIV Golf, which will be rebranded as the LIV Golf League in 2023, has drawn heavy criticism because of Saudi Arabia’s repeated human rights violations.

Saudi Arabia has been accused of wide-ranging abuses, including politically motivated killings, torture, forced disappearances and inhumane treatment of prisoners. And members of the royal family and Saudi government were accused of involvement in the murder of Jamal Khashoggi, a Saudi journalist and Washington Post columnist.

Not only are women repressed, women’s rights activists and political prisoners reportedly have been sexually assaulted, tortured and killed in Saudi Arabian detention cells.

But unlike the men, women’s golf already has ties to Saudi Arabia. Aramco, the Saudi Arabian  petroleum and natural gas company, is in partnership with the Ladies European Tour. The Saudi-backed Aramco Team Series takes place across three continents. A team series aligns with LIV Golf’s team concept that has become the most popular feature of its men’s series.

The Aramco Saudi Ladies International presented by PIF is Feb. 16-19 at Royal Greens Golf and Country Club in King Abdullah Economic City and has a $5 million purse, up from $1 million in 2022.

Several LPGA golfers are sponsored by Aramco, some promoting Golf Saudi on shirts and hat. Georgia Hall, ranked 31st in the world, was last year’s winner of the Aramco Saudi Ladies International. She said this week “a lot of factors would matter” if LIV started a women’s league and she was pursued.

“Investors coming in like they are, putting a lot of money into golf in general is a good thing for women,” she said. “It’s definitely interesting to see if there will be a LIV women’s tour.”

The final Aramco Team Series event for the 2022 season was at Trump Golf Links Ferry Point in New York and won by Lexi Thompson. Thompson’s relationship with Donald Trump could be a factor if she had a decision to make.

Thompson, No. 7 in the world and from Delray Beach, is a longtime member at Trump International in West Palm Beach and golfed with Trump while he was president. Trump has aligned himself with LIV Golf and next year at least three LIV events will be held at his properties.

Thompson and current world No. 1 Nelly Korda of Sarasota were asked about a possible future union with LIV.

“No opportunities have been brought upon us or the tour,” Thompson said. “I know Mollie said that she would have conversations but that’s not in our control. We are just doing what we can on our tour.”

Korda won the individual title at the Aramco Team Series event at Sotogrande in Spain in August.

Now, all eyes and ears will be on what Norman and LIV Golf have in store for the women.

This article originally appeared on Palm Beach Post: Women’s LIV Golf league could be tough for LPGA players to refuse