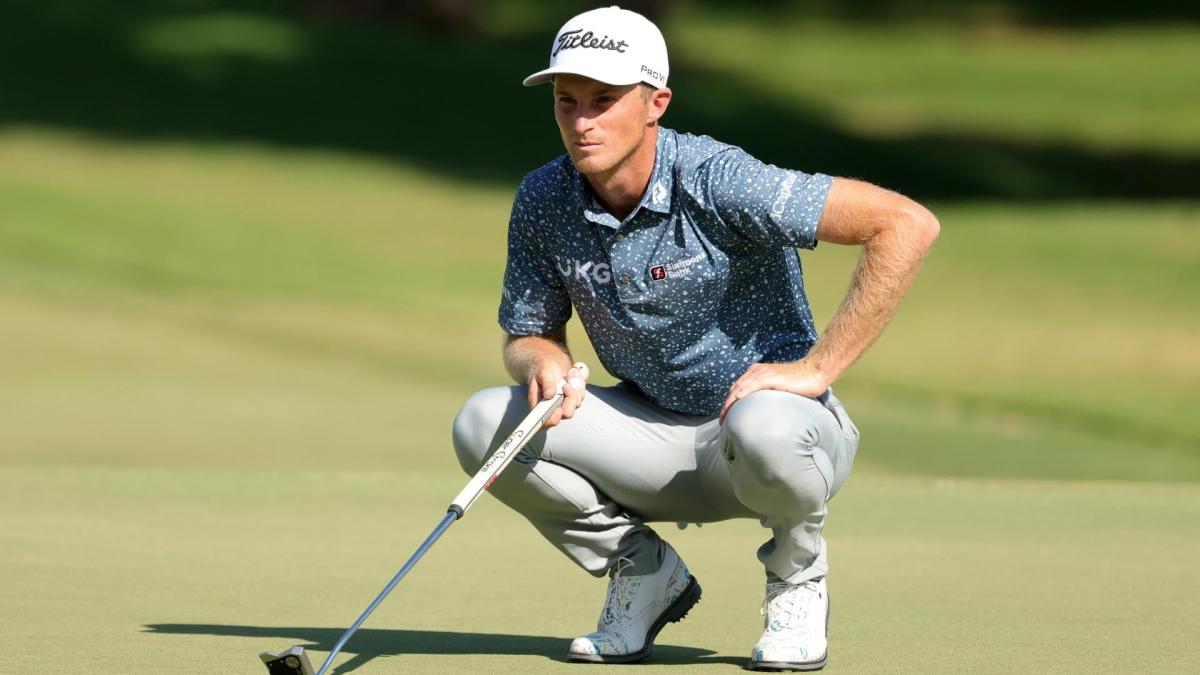 While Will Zalatoris is still recovering from a season-ending back injury, fans of the 26-year-old are getting an in-depth look into his philosophies, mentality, personal life, and more thanks to a new interview.

Zalatoris won for the first time on Tour last month after a long season of almosts, catapulting to the top of the FedExCup standings before a back injury forced him to withdraw from the BMW Championship and Tour Championship and dashing any hopes of him competing in next week’s Presidents Cup.

That doesn’t mean he’s gone radio silent as he recovers.

With a little more free time on his hands, Zalatoris recently sat down for an interview with journalist Graham Bensinger on his show “In Depth with Graham Bensinger”. The two touched on typical topics that you’ll find in a profile-esque interview: his fiancée, sacrificing for his sport, go-to meals, and pranks, but the interview is far from fluff. Most notably, Bensinger asked about the Wake Forest alum’s decision to turn down rival league LIV Golf, playing with Tiger Woods, and why Zalatoris thinks Rory McIlroy should be president – if he could be president.

On the ongoing PGA Tour vs. LIV Golf saga…

Of course, the biggest golf story of the year is the upstart, Saudi-backed LIV Golf league.

Zalatoris, like many other Tour players, was once rumored to be considering an offer from the 54-hole series, which is flush with cash. Instead, he released a statement back in June saying that he was “fully committed” to both the Tour and DP World Tour. He reiterated that with Bensinger, explaining his decision.

“If you look at the guys that have gone – and I’ve got no problem with the guys going, I mean everyone can make their own decisions – no disrespect to them at all, but a lot of them are older or they’ve been injured or they’ve been on the road for 20-plus years,” Zalatoris said. “They don’t want to do it anymore, and they want to play for another couple more years and get a nice nest egg and call it quits.”

See also  Tano Goya one of many 18 holes away from PGA Tour dream at KFT Champ.

The self-proclaimed major specialist has backed up his specialty, finishing runner-up in three of his nine major championship appearances, and he’s not about to give up the chance to continue to pursue that goal.

LIV’s application for Official World Golf Ranking points is currently under consideration, but after chasing this dream for “20 years”, he’s not going to give the majors up for money.

“There’s no amount of money, to me, that can make me give up on my dreams, especially with the amount of silver medals I’ve got hanging around my house now,” Zalatoris said. “I’ll happily trade them all in for one win.”

Outside of the actual competition, the big-ticket topic as it pertains to LIV is its backers, the Saudi Arabian Public Investment Fund, and whether it is ethical to accept money from the country.

“The moral, ethical side of that is obviously very tricky, and that’s why a lot of us just want to leave it be and just don’t want any part of it,” Zalatoris said, but he openly wonders with Bensinger, “If we are independent contractors, why can’t we do both?”

If he had to guess, Zalatoris thinks, at some point, players will be able to do both, but he’s still “through and through PGA Tour.” It’s the history that he cares about more than the money, more than the constant fight for bigger purses.

“I haven’t won yet, and I’ve made over $10 million on Tour.” That’s the response Zalatoris gives when asked why he wouldn’t want to go make guaranteed millions at LIV. “If I sat there and said I feel like I’m under-compensated as a PGA Tour pro, what does that say about me? The money that these guys are given right now, it’s just more money. It’s not life-changing money, it’s just more.”

Later on, Zalatoris drove the point home when talking about the future of the sport and the changes the Tour is making to counter LIV’s presence.

“I couldn’t be happier with what’s going to happen with the Tour over the next few years,” the Player Advisory Council (PAC) member said. “We looked at the projections, and in 2025, you might make $3 million and not keep your card. How can you argue with being underpaid at that point? I think that the more and more that we talk in terms of how we can make the PGA Tour better, the more and more transparent it is, to me, that it’s the best job in the world.”

If the two tours do end up coexisting in a peaceful manner, Zalatoris is candid about his openness to future opportunities.

“If they get world golf ranking points, and let’s say, the top 48 players in the world are playing, I’d be doing myself a disservice not playing against the best players in the world, but at the same time, I will never jeopardize my PGA Tour membership and jeopardize the majors, first and foremost,” he concluded.

On Tiger Woods and chasing the “GOAT” moniker…

Zalatoris isn’t focused on some big, grandiose goal, like being the best to ever play. He’s simply laser-focused on his next goal: winning a major championship. So, it’s no surprise that he wants to play with Tiger Woods before he retires.

“I would love to play with Tiger at least once before he’s done done, just to do it,” Zalatoris said of Woods.

The young gun admits that he has a selfish wish that Woods would take the golf cart exemption for his injuries so he can play more: “Dude, get in a cart. I’m gonna play with you. I want to see you when you’re 50. You’ve proven people wrong countless times, like even coming back from injuries, and I’m like, get in the damn cart.”

While they haven’t had the chance to play together in a competitive round of golf, Zalatoris was quick to praise Rory McIlroy for his leadership on Tour.

“If Rory was born in the United States, I’d vote him for president because he’s just one of the most intelligent, well spoken, introspective people I’ve ever met,” Zalatoris said about the Northern Irishman. “I loved him growing up, watching him play, but now that I’ve gotten to know him and see how he’s been such a good custodian of the game, it’s so cool. We’re lucky to have a guy like that around.”

Most of Zalatoris’ interactions with McIlroy have been on the PAC or in passing at player dining, but he and the rest of the Tour players listen when their leader speaks.

“He just thinks of the general interests,” Zalatoris elaborated. “I guarantee you 75% of the guys on Tour probably look at what Rory says, and then they just try to put it in their own words just because it’s just so well thought out and well said. So, he’s always got my vote.”