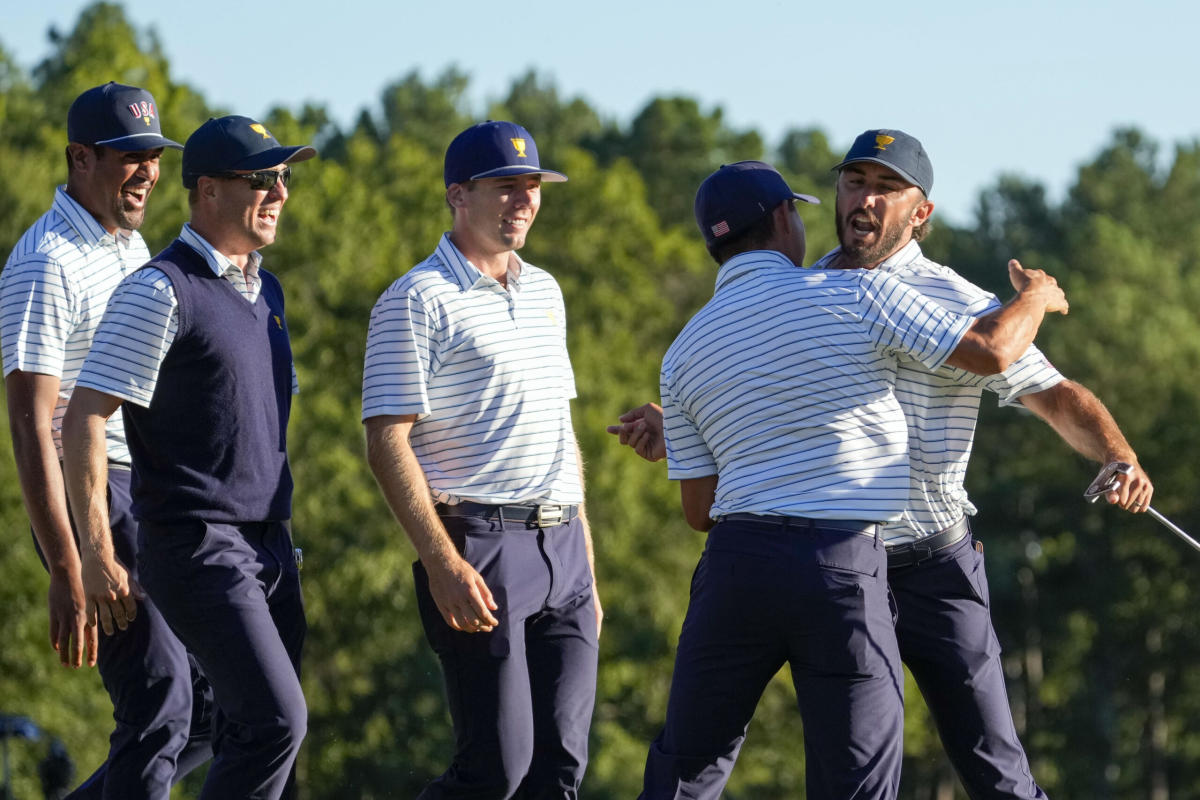 No matter how lopsided scores get at the Presidents Cup, Davis Love III is probably too sporting to get a head start on jotting down the thanks due in his victory speech. It promises to be a lengthy list since every member of his team will have contributed points to the ledger by Sunday, not to mention the caddies, host club officials, backroom assistants, and the phalanx of EVPs, SVPs and lowly VPs who’ll descend from PGA Tour HQ for the closing ceremony. Yet it would be remiss of Love not to single out for faint praise Greg Norman, a one-man Superfund clean-up crew who has done for the U.S. what successive captains and a task force couldn’t: decontaminate the team room dynamics that have undermined it for decades.

Postmortems of this Presidents Cup will rightly note that the International side was depleted by the moves to LIV Golf of players like Cameron Smith, Joaquin Niemann and Louis Oosthuizen. While that’s indisputable, it remains debatable what impact those losses really had since the Internationals weren’t exactly riding a hot streak before the defectors signed on to work for a Saudi regime more accustomed to deploying teams of hitmen than of golfers.

Fairness to Trevor Immelman demands acknowledging that things would likely be more competitive had he been able to call on those missing stars. But it’s clear that LIV’s most significant impact at the 14th Presidents Cup isn’t a negative one on the Internationals, but a positive one on the Americans. The U.S. team is obviously enjoying itself at Quail Hollow, but that doesn’t owe solely to the score. Sure, a romp breeds good humor, but this is a group flush with genuine camaraderie and wholly at ease with each other.

It’s easy to overlook just how long interpersonal toxicity has been an accepted part of the U.S. team room. The chill (and occasional distaste) between Tiger Woods and Phil Mickelson loomed large during Europe’s Ryder Cup dominance in first dozen years of this century. Mickelson’s role in hobbling U.S. squads came to a head like a pustule in 2014 at Gleneagles, culminating in a press conference during which he piloted a Greyhound over Tom Watson’s back while posturing as a well-intentioned onlooker.

Four years later in Paris, eleven members of the Stars and Stripes found themselves asking ‘Pourquoi, Patrick?’ after Reed publicly blamed the team’s drubbing—and his own losing record—on skipper Jim Furyk and Jordan Spieth. Not content to be a scourge on one team, Reed then put the ’19 Presidents Cup side in the defensive position of having to make light of his highly questionable behavior in a Bahamas bunker days earlier. Cobbling together the appearance of cohesion can be a compromising process.

The atmosphere in the Ryder Cup locker room last year at Whistling Straits was perhaps less toxic but no less a distraction owing to the callow feud between Bryson DeChambeau and Brooks Koepka, about which captain Steve Stricker and his entire roster fielded constant questions.

For veterans of those experiences, this week in Charlotte must feel like the dawning of a new era in which problem kids have been banished to the sin bin and jerks have been jettisoned. It will bring no comfort to Luke Donald, who will captain Europe against these guys a year hence at the Ryder Cup in Italy.

In the spirt of finding a cloud to go with every silver lining: golf fans might not be well served by Team USA’s newly-forged collegiality. It removes the engaging frisson of recent contests in which the U.S. focus often seemed to be on an enemy within. Comity doesn’t usually lend itself to compelling team competition, so there will be golf industry executives secretly hoping that Europe is somehow forced to field a Garcia, Westwood or Poulter in Rome to maintain the tradition of back room dysfunction as a fun storyline for fans. But while golf in general—and team golf in particular—has undeniably benefited from polarizing figures, any definition of acceptable polarizing behavior should stop this side of normalizing a tyrant while lying about being a force for good.

As the U.S. team stands on the cusp of a halcyon era, it’s two competitors—Europe and the Internationals—appear headed for a period of rebuilding and, in the case of the Presidents Cup itself, a long overdue reimagining. What won’t change are the most dependable sources of edginess and angst in the respective Cups: hard-fought competition and the occasional overstepping induced by patriotic fervor. Both are preferable to the scheming by the selfish that has become the distorted norm.

See also  DEREK LAWRENSON: Ten months after his fairytale success, Bland is dreaming of making it to Augusta

During the celebrations on Sunday evening, members of the U.S. team should chip in for a bottle of Greg Norman’s eponymous wine (at $17, it’s a mere buck-forty each) and toast him for ensuring that they’ll be among the precious few to emerge successful and with enhanced reputations from his new world order.