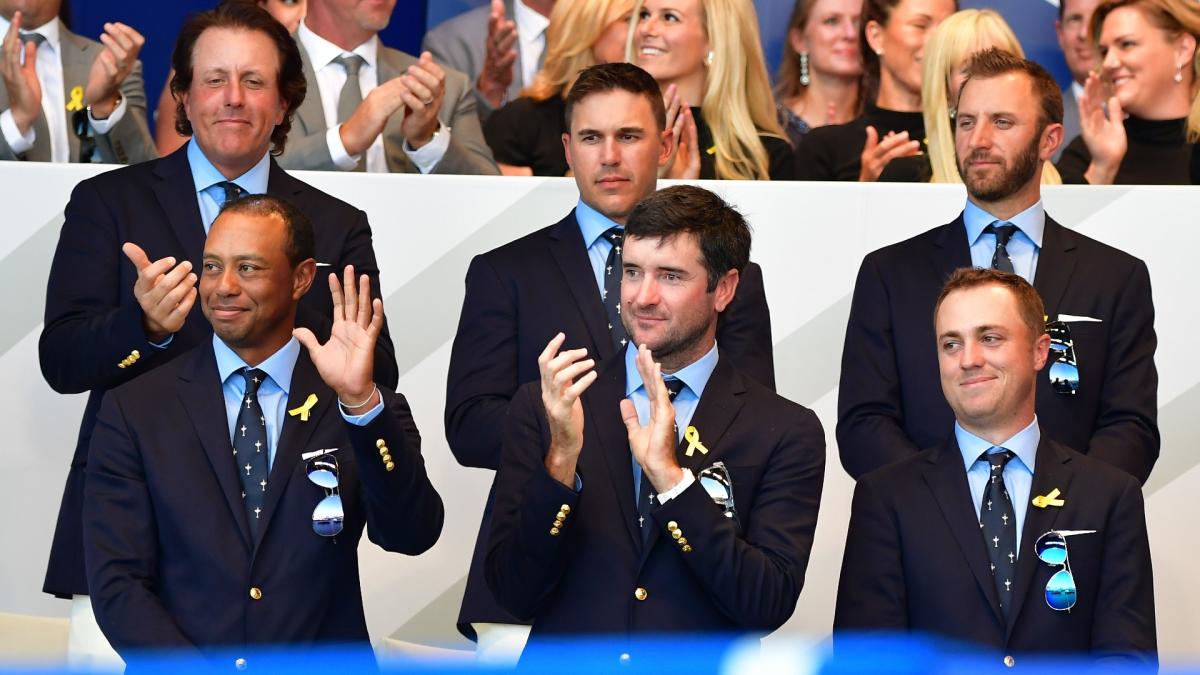 There are few certainties in professional golf these days but this is one of them. This match will never happen, the following is a bit of fun. It can’t happen and it won’t happen. But if it ever did happen it would be spectacular for all manner of reasons…

Who else? We did wonder if Rome would be where Tiger would take the reins but that’s not to be. He’s already looked after a Presidents Cup team, in a joint playing capacity, but let’s keep things simple and have Tiger with his walkie-talkie in hand rather than his clubs. Who better to lead a team who have all idolised him while growing up? He might not have enjoyed the best Ryder Cup career but he’ll likely play a huge part in future Ryder and Presidents Cups in the years to come. And if anyone will be able to give his side the upper hand in the pre-match comments it’s Woods who, when he’s in the mood which is more and more these days, can articulate things brilliantly.

Similar to Tiger, who else? Where else (other than The Matchzzz) could you get these two going head-to-head again? Even before LIV Golf was an actual thing we knew more about Mickelson’s opinions on its pros and cons, even if his comments were supposedly off the record. Again, we had mentally pencilled in Mickelson for the captaincy at Bethpage, maybe against Ian Poulter, but that’s never going to happen so here’s a chance for him to cut his teeth.

Mickelson is the mouthpiece of LIV Golf and we can expect to hear more and more from him as he comes out of his shell again. He’ll stoke the flames with his often nonsensical opinions but, whatever you think of him, he’s generally entertaining. He’ll have plenty up his sleeve, some of it amusing, plenty of it cringey and he’s maybe the only golfer on the planet who will happily give a load back to Tiger and not go to pieces.

See also  Bryson DeChambeau might not be at Bay Hill this year, but we’re still judging his style from last year’s event (when he won)

Who’s pally with Tiger? Well, Fred Couples, given his alliance with TW and his dislike of LIV, is a banker. Davis Love III can also help out, let’s throw in Steve Stricker to add a bit of calm and Billy Horschel to add a bit of needle. And, to make it a slightly less of an American-centric affair, let’s throw in the brainpower of Paul McGinley and Thomas Bjorn who know a thing or two about man management, stats (Tiger loves his numbers) and team harmony.

Again, plenty to go at here. Henrik Stenson springs immediately to mind as his leadership days seem to have come to an abrupt end in recent months, likewise Graeme McDowell who would likely have been the skipper at Adare Manor. To add even more wit and repartee to proceedings why not include Bubba Watson to bring whatever he brings to a party behind closed doors. Bubba loves helping out behind the scenes even when it’s abundantly clear that he’s not wanted as happened at the 2016 Ryder Cup.

This is the biggie, play it over three or four days? The LIV boys may struggle to … (insert joke about 54 holes). It’s a new concept so let’s play around with the format at least a little bit. Let’s make it over four days and add some greensomes to spread the word about golf’s most underrated format and let’s get everyone playing, all the time. There’s plenty of strength in depth all round here so let’s not worry about players sitting on the sidelines.

Day 2: Six foursomes and six more foursomes (all playing partners must wait down the fairway on any par 4 or 5 to help with pace of play)

Day 3: Six greensomes (look it up)

Day 4: 12 singles (no reason to mess with things here)

All pairings or singles order to be simply handed in. No need for any mind games by reacting to one another, just hand them in and let nature take its course. And no blaring music to be played over any announcements.

Royal Greens Golf & Country Club will provide the stage for LIV’s home matches to please the authorities. This does run the risk of crowd numbers (as in there won’t be one) but it’s all about keeping the sponsors happy.

Likewise the PGA Tour will do what the PGA Tour does best and rarely, if at all, move outside the States. The first match can be played at TPC Sawgrass, home to the Tour, before moving to the traditional hotspots of Riviera, Bay Hill, Muirfield Village, Scottsdale etc etc

Any qualifying period would likely look almost identical so save someone a job of making a mess of how many captain’s picks to have and take the dozen straight from the OWGR.

As things stand it would look like this which should put the fear of god into any opposition.

Things get slightly skewed here as the world rankings are an irrelevance, Captain Phil is playing at the same time as everyone else so never gets to watch any of his team in action (unless they’re in his group), some players have only played LIV aside from amateur golf and Peter Uihlein would make a team if we were to go off their standings.

So, for this first edition, let’s lean towards those suited to matchplay by which we mean a boat load of 40+ Europeans with stellar Ryder Cup records and throw in Paul Casey on the off chance that he’s fit.

Kevin Na, yet again, misses out on some team action and Talor Gooch also makes way for his foul and abusive, and ludicrous, comments over the Ryder Cup.

On the huge upside we get to watch Cam Smith play golf again.

We haven’t got the players’ Strokes Gained stats in front of us but there’s no need for some of these as they write themselves. We don’t want Viktor Hovland chipping very much so let’s give him Collin Morikawa, we do want Matt Fitzpatrick to finally get off the mark so let’s give him World No. 1 Scottie Scheffler.

And just when the LIV boys think that they can’t take any more, let’s throw Rory and big Jonny Rahm at them.

There really is something for everyone here with a collection of personalities that tick every single box. Even the ever-assured Mickelson will be scratching his head at who goes with who here. If we were to start with the more straightforward characters then Smith and Oosthuizen should be able to ball strike their way to a few points together. Then we can casually put a Chilean and a Mexican together as they’ll probably get along despite their countries being over 4,000 miles apart. Westwood and Garcia have shared a bit of previous cup success and won’t be too disappointed by the other one’s putting.

We’ve lost track of whether Dustin and Brooksy are still friends but, on the off chance that they are, both are back in good form so this could be sensational.

Now the fun bit as we’re left with Reed, DeChambeau, Casey and Poulter. Casey and DeChambeau seem to talk in a different language to anyone else on the planet so could be an inspired partnership while Poulter and Reed could be the most ballsy pairing in the history of golf – and the prospect of Reed shushing literally 15 spectators could be the sporting image of the century.