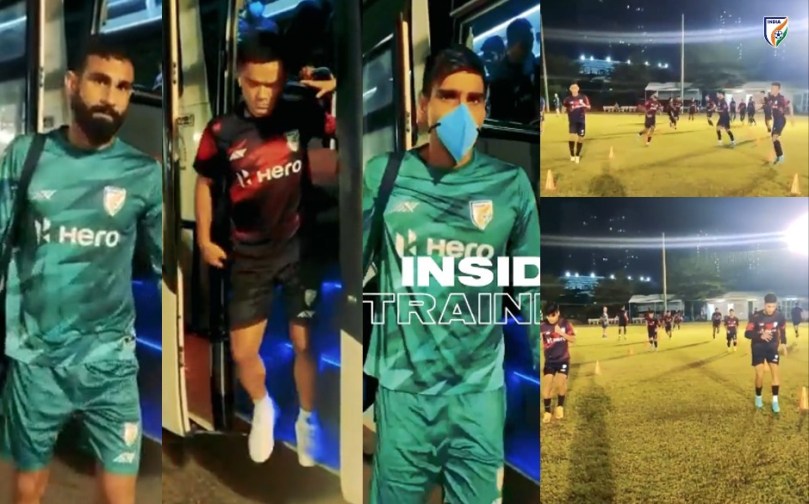 IND vs SGP LIVE: India vs Singapore Live: India in Hung Thinh Tournament–The Indian Football Team is set to take part in the Hung Thinh Friendly Football Tournament along with Singapore and hosts Vietnam as a part of a tri-nation series. This is Sunil Chhetri & co.’s first international game after the upliftment of the ban by FIFA and has been most awaited. The 23-member squad named by Igor Stimac has already reached Vietnam and have started the preparations ahead of the game.  Follow India vs Singapore Live Updates on InsideSport.IN

#BlueTigers 🐯 sweating it out at the training session 💯#BackTheBlue 💙 #IndianFootball ⚽ pic.twitter.com/r9juhIQtwT

The team has been designated with a time of practice, and Igor Stimac is seen to lead a routine practice with the squad including lap running, strength condition as well. The team is even seen trying to improve their coordination and passing abilities. However India is often seen to be playing a game dominating the possession and short passes. Players like Ashique Kuruniyan, Roshan Singh , Akash Mishra help in keeping up with their agility and pace.

The main problem of India lies in the lack of finishing abilities in the forward. Despite the goal mouth action India’s sloppy finish has often prevented them to get away with full points. Igor Stimac on recognizing the wastefulness upfront and slow conversion rate, is seen to make his squad polish their finishing abilities. The squad was infact seen to play an intersquad match among themselves to aid the preparation. However, Sandesh Jhingan deems to be rested for the game against Singapore.

On the eve of India’s first meeting with Singapore in ten years, head coach Igor Stimac sounded confident but cautious. Though Singapore has made significant progress in recent years, the Croatian coach believes India has the ability to tame their opponents. The 55-year-old is aware of some of his team’s fitness challenges. At the same time, he believes his players are capable of fighting until the final whistle is blown.

“Singapore made big progress in recent years. They have a new coach, who has made some changes in the system that often makes things difficult for the opponents. But I will tell my players to play confidently against them and show what exactly we have in store for them,” Stimac said.

“Singapore are quite good especially in the high pressing area. I have observed the way they press the ball all over the pitch to make things which is making it tough for the rivals. So, there is one small advantage they have in this regard,” added the coach.

“I think that we have enough players with technical ability who can find a way to escape from the such high press, and with many players in the middle making it tight and difficult. But we are going to find spaces on the weak positions and play as per our plan,” Stimac quipped.