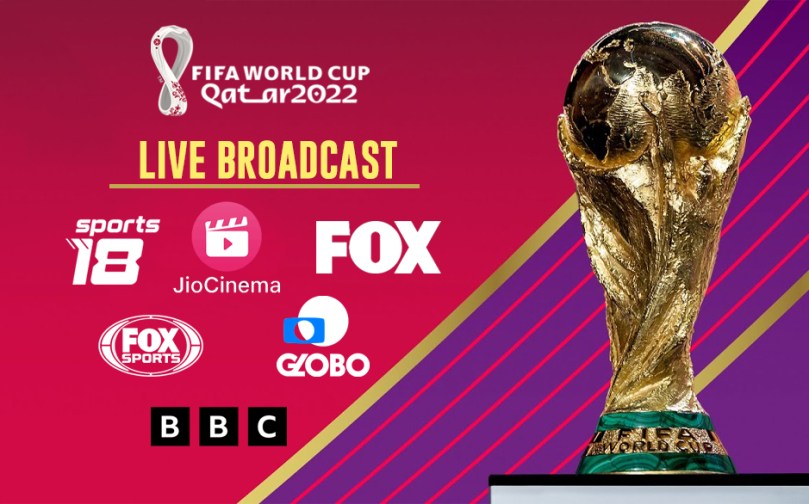 FIFA WC LIVE Broadcast – FIFA World CUP 2022 LIVE: Qatar vs Senegal LIVE Streaming: The second game of the day saw, Qatar face their second consecutive defeat at the hands of Senegal. In 1st of the 4 matches today in FIFA World CUP, Iran has stunned Wales. The Netherlands and Ecuador, both undefeated, will look to maintain their winning ways and top Group A when their match kicks-off at 9-30 p.m.  The final match of the day features the Three Lions, led by Harry Kane, taking on the United States at 12:30 AM. FIFA has managed MEDIA RIGHTS LICENSING deal with all 195 countries recognised by United Nations. This means the entire GLOBAL will watch FIFA WC live. Watch FIFA WC LIVE Streaming free on Jio CINEMAS & FIFA WC LIVE Updates with InsideSport.IN

WC LIVE Middle-East: Al Jazeera has acquired the regional broadcast rights to the FIFA World Cups of 2022. The broadcaster will air games across the MENA region, The deal includes cable TV, satellite, terrestrial, mobile and broadband rights across 23 territories and countries.

FIFA WC LIVE Italy: Rai has acquired FIFA World Cup 2022 television, digital and radio rights in Italy. Thought 28 matches of the tournament, including the opening match, final and both semi- finals, will be shown on the broadcaster’s flagship channel, Rai 1.

FIFA World CUP South Africa: All 64 matches of the FIFA World Cup 2022 will be broadcast live on SuperSport in Sub-Saharan Africa. SuperSport’s pay-TV broadcast rights will be extended to all platforms

World CUP Europe LIVE: The European Broadcasting Union has secured all exclusive media rights for the 2022 FIFA World Cup in Europe. The new FIFA/EBU deal covers the rights for 37 countries in Europe.

(Click for territory by territory LIST – Check how to watch FIFA WORLD CUP LIVE in your country) https://digitalhub.fifa.com/m/203f2697ad928edb/original/FIFA-World-Cup-Qatar-2022-Media-Rights-Licensees.pdf

FIFA World Cup 2022 matches will be played at eight stadiums in Qatar.

The group phase will be played from 21 November to 2 December. The knockout phase will begin with the Round of 16 from 3-6 December.

The quarter-finals will be played on 9 and 10 December, with the semi-finals on 13 and 14 December. The play-off for the third place will unfold on 17 December. The FINAL is scheduled for December 18th