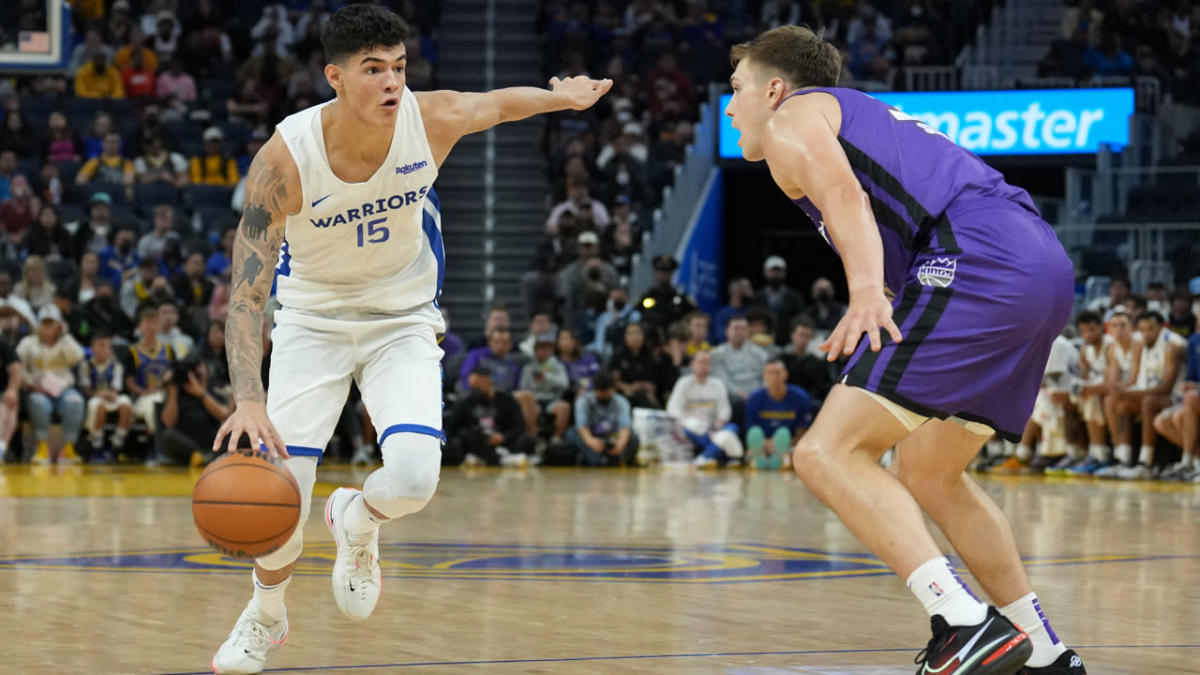 SAN FRANCISCO – All challenges considered, 21-year-old Gui Santos delivered quite the captivating tease Saturday in his debut as a member of the Warriors.

Enough that it’s reasonable to believe the 6-foot-8 guard/forward might one of those rare late second-round draft picks that builds an NBA career.

Despite being 6,000 miles from his homeland in Brazil and participating in only two practices with complete strangers as teammates, Santos exhibited the upside that compelled the Warriors to select him No. 55 overall in the NBA draft nine days ago.

Santos produced team highs in points (23), rebounds (six) and steals (three) as the NBA Summer League version of the Warriors took an 86-68 loss to the Sacramento Kings in the California Classic at Chase Center.

“Santos was good,” coach Seth Cooper said, “for a guy who hasn’t even had all the practices that we’ve had.”

Even as the youngest available member of the Warriors – Patrick Baldwin Jr., Jonathan Kuminga, Moses Moody and Ryan Rollins did not suit up – Santos displayed clear basketball instincts and solid overall skills but also a dash of dazzle.

He already has a fairly polished Eurostep move, which he showcased after a steal led to a solo fast break that concluded with a 3-point play that brought massive cheers from the crowd.

“In Brazil, everybody knows me because I know how to do it,” said Santos, who has a good grasp of English. “I like to do the Eurostep move to use my body during it. I’m always doing that. You’re going to see that a lot of times.”

Santos is the child of pro-basketball-playing parents and entered the professional ranks in Brazil in 2018, when he was 16 years old. The following year, he scored 27 points in Brazil’s FIBA victorious South America Under-17 final over Argentina.

The experience showed. His comfort level and confidence increased as the game went on. He shot 7-of-13 from the field, including 1-of-4 from distance, and was 8-of-11 from the line.

“Before the game, I was nervous because it’s a different game here,” Santos said. “I’m playing outside of my country and my family is not here. But when I started to play, I gained confidence. Catching the ball and making the plays, I started to feel better.”

Santos’ defensive anticipation led to steals and deflections, while there were signs of advanced offense, including clever passes and a nice step-back jumper. He’s very willing attack to the rim.

The primary blemish on Santos’ performance were six turnovers, some of which surely can be attributed to the newness of everything before him.

See also  Can the Warriors be fixed with a trade? Probably not

“You see him really aggressive,” Cooper said. “Did he have some turnovers? (Yes). Did he have some (bad) plays, especially early? (Yes). But you see with young guys, some the young guys even as they get into the NBA, that have a lot of turnovers are guys that turn out to be really, really good players.

“We wanted to see him with the ball in his hands, and we saw that. He got to make plays. The more he does that, as Summer League and his career progresses, the better he’s going to be. But he showed a knack for, offensively, having an effect on the game for a guy playing his first game in the United States.”

Though Santos likely will not be on the Warriors’ roster next season – he’s a year or two away from the NBA – he was by far their best player in a game much more about individual evaluations than the story told by the scoreboard.