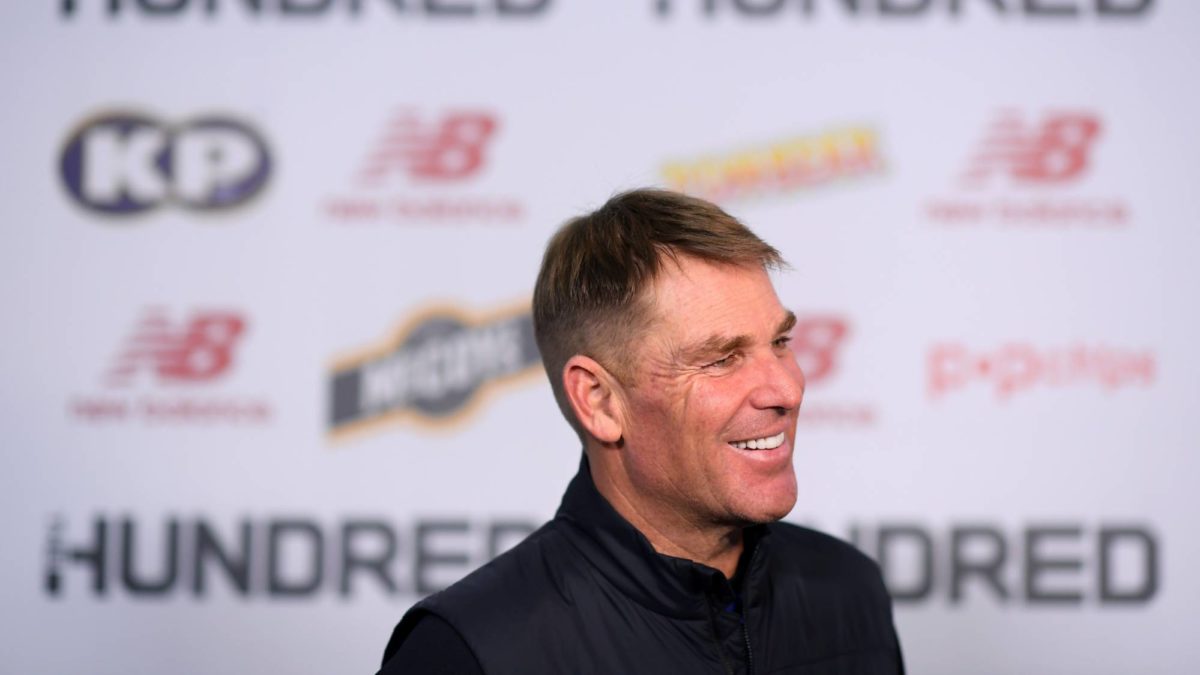 Shane Warne’s manager has opened up on the cricket legend’s final moments, telling Fox Cricket about his plans to take time out of the game before tragically passing away.

James Erskine revealed he was the one who informed the cricket legend’s father about his death.

“I got a phone call at 10.37 last night from our guy in Melbourne, Andrew Neophitou, who was actually with Shane in Thailand,” he said.

“Shane had decided that he was going to have three months off – in fact, he wanted a year off, and I said there was no way he could have a year off because they’d have forgotten you by a year.

“He was having three months off and this was the start of it and they had only arrived the night before.

“They were going to go out for a drink at 5 o’clock, and Neo knocked on his door at 5pm, because Warnie was always on time.

“He went in there said ‘come on you’re going to be late’ and then realised something was wrong.

“He turned him over, gave him CPR mouth to mouth for about 20 mins.

“Then the ambulance came and took him to the hospital, which was about a 20-minute drive, and within I suppose 45 minutes I got a phone call to say he was pronounced dead.”

Erskine was the person responsible for informing the Warne family of Shane’s tragic passing.

“You work on adrenaline, you’re not much help to anyone if you’re a blithering mess.

“I’m very lucky in that I have a mind that works quite clinically. I was talking to Keith (Shane’s father) last night when he son was dead and he was going to go and see the three children.

“I was talking to Brooke (his daughter) and then Jackson (his son)  and I was not going to tell them that their father was dead, because he wasn’t at that stage, but I said that it looks pretty grim.

“Simone (Shane’s ex-wife) had gone to pick up the youngest child, Summer, and we then called to say ‘Listen, you better tell them when you’re all together that Shane has passed away’.

“It’s one of these things: someone said to me today that when someone is larger than life, you don’t expect them to die.

“I think that’s a good analogy: you don’t expect Shane Warne to die because he was an extraordinary human being.”

Fox Cricket opened their coverage of the Test in Pakistan with the tribute show. Presenter Isa Guha and former opponent turned commentary box partner Michael Vaughan were among those sharing their stories of the great man.

“Just stunned,” said a clearly emotional Isa Guha. “Loved him. He did so much for so many people. He was magic, watching him on screen as a cricketer.

“There were so many incredible stories of him playing cricket, but post that, he made people feel ten feet taller which was a tremendous help to me specifically.

“That was the magnetism that I talked about, the excitement of being in his presence. He really supported me on my journey as a commentator and broadcaster and I’ll never forget that.

“I went down to Melbourne recently to try and catch up with him and didn’t get the opportunity. He had tremendous gratitude for what he had achieved and the people that he’d met on his journey. He always talked about his family and he was happy with life.

“It was genuine love for cricket and his brain. That’s what I’ll miss the most: his brain, all that cricket knowledge, and being able to extract that out of him.

“We shared a love for roulette and I’d always put down on red 23 when I went out, and I’d message him to tell him if it went well or not.

“He’s going to be tremendously missed.”

Michael Vaughan shared his experiences from this Christmas passed with Shane.

“Like everyone, I’m absolutely gutted,” said the former England captain. “I guess, speaking at 4.35 in the morning is very fitting because the King would have still been rocking and rolling at this time.”

“This was his best hour, when he used to do his best work. I’m distraught. He went from an enemy on the pitch, someone I admired as player, to a great mate.

“To think I spent his last Christmas with him, with his lasagne sandwiches, piled into bread rolls with I’d say an inch of butter on them.

“He’d squish them together and eat it as If it was his last lasagne sandwich on Christmas Day.

“That was special, to think that he took me into his family on that day when I was on my own in Melbourne. I travelled down to be with his brother Jason, his gorgeous kids and his mum and dad. That’s very special to me.

Kerry O’Keeffe pushed Vaughan on some of the tall tales that Warne was known for.

“We’ve all got the stories and I don’t know if we’re able to tell them on here!” said Vaughan.

“Shane is going to leave not only the legendary stories from on the pitch with the ball, the bat and his sledges, what we’ve all heard on the commentary but also the stories where, one day, we’ll all be able to get together with a red or two – a vodka red bull was his favourite – and that’s what we’ll toast and tell the stories.

“Many moments I’ve been around him, I can’t quite say on air (because) I don’t want to say too many things. Let me tell you, he has lived.

“At 52 years of age, he has lived to the age of 85 and probably a lot older than that. Every minute that he was on planet earth, he made the most of it. He had some life.

“Now and then he put a bit of mayo on the stories, but some that we heard on the car from Coogee to the SCG, I would say not. I tell you what, I wanted them to go on a lot longer.

Vaughan was asked about Wane’s impact on British culture, and broke down remembering his friend.

“We feared him. In the UK, he’s one of us. That’s why he loved so much. That Gatting ball made him cricket famous, but here in the UK, he’s got so many close friends. I spoke to a lot of them yesterday (cries) he’s going to be hugely missed over here.”

Allan Border, who captained Warne in his first international appearance and is not the type to cry easily, said that even he shed a few when he heard the news.

“I’ve shed some tears over the last couple of days with Rod Marsh,” said the former Australia great. “It’s going to be hard getting through the next couple of days finally realising I’m not going to see Shane again.

“I haven’t had a lot of sleep since 1 o’clock last night, just trying to sink it all in. I couldn’t believe it.

“I shed a few tears and started drinking whiskey and guava juice of all things just to ease the pain. Thinking about the good times with Warnie and not quite believing what had happened.”

Border went on to speak about the moment he chucked the ball to Warne at Old Trafford for his first crack in international cricket.

“Greg Matthews was bowling well and I think it was he who prompted me and said, ‘Why don’t you give the leg-spinner a go?’ I thought upon it and said, ‘yeah OK,’” he said.

“I threw Warnie the ball and boom, boom, boom, three wickets in a couple of overs and job done, and we won the Test match we shouldn’t have won.

“I think from that point, Warnie gained a lot of confidence. He talks about that being the real turning point as a cricketer.

“He was just your basic club leg-spinner, but could really land them and really spun them hard.

“Initially he was just very naive but it didn’t take long, I’m talking in 12 months, he just got better and better and the psychological side of his game started to come to the fore.

“He was a smart guy, Warnie. He knew how to push buttons. Some guys were out before they even went out to bat.

“He was a special, special character and cricketer and a great man off the field, don’t worry about the public persona, that’s Warnie doing his thing. But he was a top-shelf man.”

“He’s on that (Bradman) level. Sir Donald Bradman was a batsman, he’s our best batsman.

“When Shane Warne was in the Australian cricket team, Australia wins Test matches. It was the same with Bradman.”

Ian Healy, who was behind the stumps for the Gatting ball, added:

“To score runs for long periods against Shane Warne with such accuracy, coupled with the skill and ability to spin a ball so well, was nearly impossible. Not too many players lasted five hours against our attack with Warne in it.

“What made it great, I think his accuracy gave him great confidence and then he could spend his energy talking to the batsmen at the other end.

“Putting challenges out to them, criticising them, and even most dumbfounding was complimenting them. And I got to see the batsmen’s reactions from my end of the pitch.

David Warner revealed that it was he who told the Australia team, currently playing in Pakistan, about the tragic news.

“I found out from James (Erskine) after everyone from his family was notified,” he told Fox.

“Just before it got out we spoke to the guys and we were in the bus ready to come back to the hotel.

“Everyone was just absolutely gobsmacked. There was silence in the cars and we came back.

“It is just like anyone that you lose it is just like part of your family. You look at the tributes that are coming out around the world we raised a glass and shared some great memories and stories about Shane and what he did for cricket and world cricket in general.

“From my personal stories I had Warnie’s poster on my wall like every other young cricketing kid.

“I just grew up wanting to be like Shane. I started my journey bowling like him and batting in the middle order.

“Through 17s and 19s I tried to replicate everything that Warnie did with his action. I think everyone has seen my action alongside his. I just wanted to be like Shane from a bowling front.

“The special memories that I remember from Shane’s playing days was 2001. It was probably going to be a draw. Both England and Australia got 500. I remember Warnie going for 150 in his first innings and he only took one wicket.

“Then he changed it in his second innings and took 4-40 off 37 overs and changed that game dramatically and England were bowled out for 120.

“To witness what one guy can do from nothing. That wicket was flat and he changed the course of the game. That was amazing.

“The other one was I know he will be kicking himself still to this day was when he got 99 against New Zealand and everyone stirs him up about Daniel Vettori bowling a no-ball.

“Those are small memories of watching him on TV.”