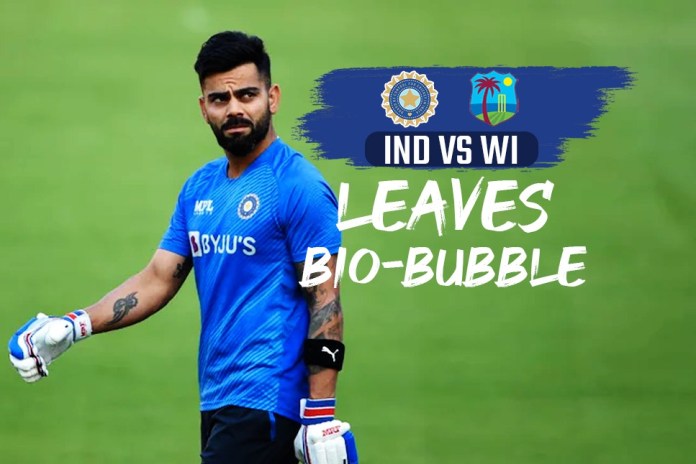 IND vs WI LIVE – Virat Kohli Skips 3rd T20: Virat Kohli will not feature in the 3rd and final T20 of the series on Sunday. Kohli according to a report by PTI has already left the BIO-BUBBLE and will miss the 3rd & final match. It is worth noting that India has already won the series on Friday. Kohli played a brilliant knock of 52 in 2nd T20 but will not feature in the final game of the series: Follow India vs West Indies LIVE Updates with InsideSport.IN

Virat Kohli given bio-bubble break by BCCI, leaves for home before third T20I against West Indies

India Squad SL Series: Jadeja & Bumrah set for comeback – Meanwhile, Ravindra Jadeja and Jasprit Bumrah are all set to make a comeback for the Sri Lanka series after being rested for the West Indies series. However, former skipper Virat Kohli is likely to be rested for the T20 series while making a comeback for the Test series, starting March 4 in Mohali. The three-match T20 series will start on February 24 in Lucknow with the squad set to be announced in the next 48 hours. Follow IND vs SL Live Updates on InsideSport.IN.

While the T20 squad for Sri Lanka series is expected to remain the same as the West Indies series apart from the addition of Ravindra Jadeja and Jasprit Bumrah. KL Rahul’s return is also doubtful for the T20 series as he is undergoing rehabilitation at the NCA in Bengaluru.

As per a Cricbuzz report, Ravindra Jadeja has already reached Lucknow and has begun quarantine for the T20 series. The first T20 will be played at the Ekana Stadium in Lucknow followed by the last two in Dharmashala.

Virat Kohli to skip T20 series – As for Virat Kohli, he has been given rest ahead of the two-match Test series. That means Virat Kohli will only play his 100th T20 against South Africa in June at home. As for his 100th Test match, it is likely to be in Mohali. But the former skipper hasn’t clarified whether he will be available from the 1st Test.

See also  5 ways to watch IND vs NZ for free

If he misses the first Test, he will be back for the second and final Test in Bengaluru. The Day Night Pink ball match at the M Chinnaswamy Stadium will be his 100th Test in that case.

India Squad SL Series: Players who are out with injury or rested

Umesh Yadav in, Shardul Thakur out