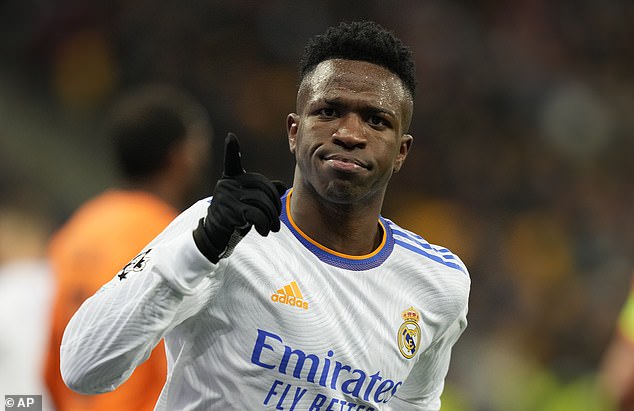 Vinicius Junior ‘is a great player for his age and deserves everything he’s getting at the moment’, hails Karim Benzema after Real Madrid star scores twice in 5-0 win at Shakhtar Donetsk

By Pete Jenson for MailOnline

It’s almost a year since Karim Benzema uttered the famous: ‘don’t give it to him, it’s like he’s playing for the other side’ to team-mate Ferland Mendy in the tunnel at half-time against Borussia Monchengladbach.

The French forward was talking about misfiring Vinicius, but 12 months on he was singing his praises after the Brazilian’s brilliant double saw off Shakhtar Donetsk.

‘He is still young and he deserves everything he’s getting at the moment,’ said Benzema.

‘He’s a great player for his age. He is scoring goals and creating them and we all hope it continues.’

Benzema also got on the scoresheet as Madrid thrashed Shakhtar 5-0.

‘This was a very important game for us after we lost the last one at home. It will help everyone’s confidence ahead of the game against Barcelona.’

Benzema started between Brazilians Vinicius and Rodrygo and the front three all netted on the night but it was Vinicius who stole the show with the sublime third and a well-worked second.

‘I am always trying that move in training and it always comes off but sometimes it’s more difficult in games,’ he said.

Asked about his 12-month transformation in front of goal he said: ‘I’m only 21-years-old. I have a lot of time to become the great player that the club and I believe I can. I keep working hard. Sometimes it doesn’t come off for me but that’s normal. I keep trying and the goals come.

‘I have now scored seven goals this season; that is already more than last season.’

Benzema remains the leader of Madrid’s attack. He now has 10 goals in his last 11 games for club and country. Both are in the sort of form that Carlo Ancelotti would want them in ahead of Sunday’s Clasico.

Asked about the need to produce game after game Vinicius added: ‘I have always been able to handle the pressure. The coach helps me with the confidence he shows in me. We love these Champions League games now we can rest and look forward to Sunday.’ 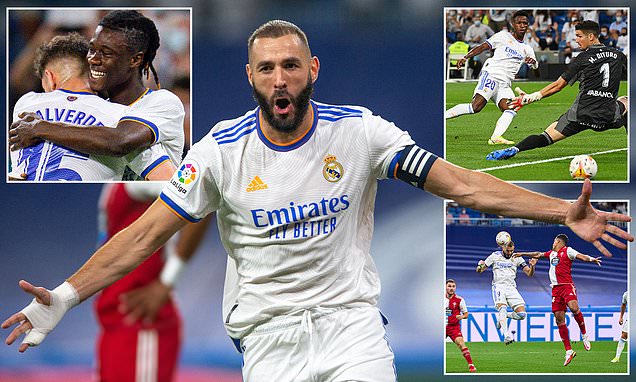 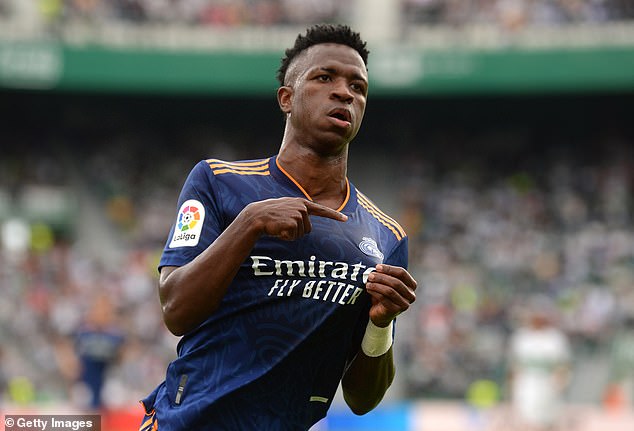 Elche 1-2 Real Madrid: Vinicius Junior at the double for Carlo Ancelotti’s side