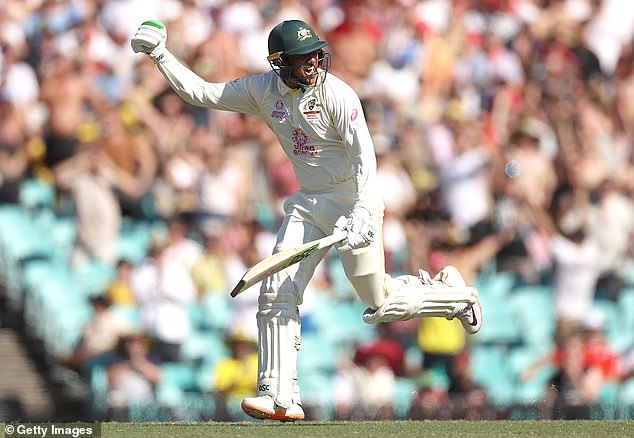 England face another last-day trial if they are avoid going 4-0 down to Australia after Usman Khawaja decorated the fourth Ashes Test with the second hundred of his international comeback.

Set a purely notional 388 in 49 minutes and a day, they reached stumps on 30 without loss, as Zak Crawley and Haseeb Hameed began with England’s highest opening partnership of the series. The bar, admittedly, is low – but this is not a tour for splitting hairs.

After a day of glorious sunshine, confounding forecasts of rain, England began their second innings as clouds began to roll in from the direction of the city. Even the weather, it seems, has danced to Australia’s tune. 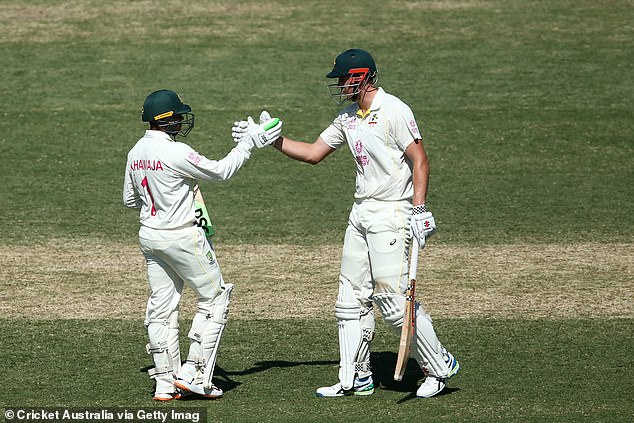 But Crawley off-drove Pat Cummins sweetly for four, then clipped Mitchell Starc through square leg. At the other end, playing for his immediate Test career, Hameed did his best to get forward and hang on. To his credit, he did, finishing with eight; Crawley was not out 22.

A little over an hour earlier, and for the second time in three days, the SCG rose to salute a hundred from Khawaja, who became only the third player – after Doug Walters and Ricky Ponting – to score two in a Sydney Test.

If his second-innings century was made in less taxing circumstances than his first, it ticked similar boxes: elegant, unruffled, and occasionally violent – especially on the pull – it was the work of a player determined to make up for lost time.

Ridiculously, Australia’s selectors must now decide whether to give Khawaja another Test at Hobart. Travis Head, who was his team’s leading run-scorer in this series before Covid ruled him out of this game, is available again, and there seems little appetite to fiddle with the batting order by leaving out opener Marcus Harris. 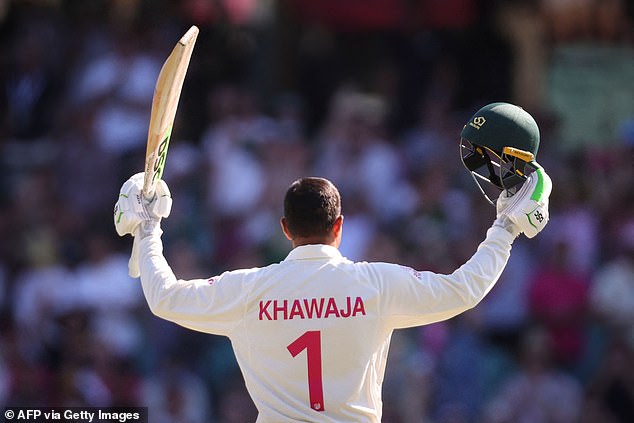 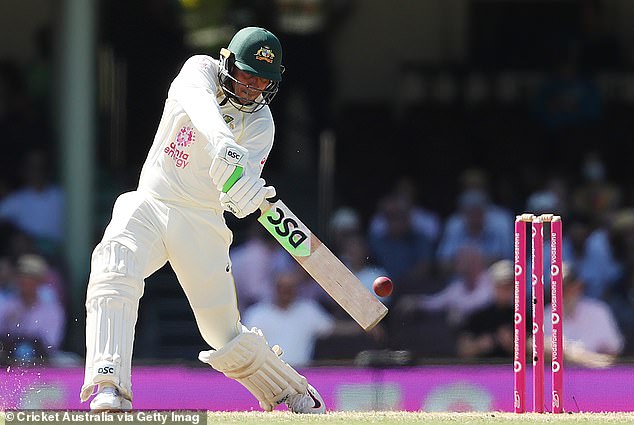 Harris’s moderate series continued when he was caught behind by substitute wicketkeeper Ollie Pope off Jack Leach for 27, after Pope had held a regulation edge to see off David Warner, fiddling at Mark Wood, for three.

In the first over after lunch, Wood then removed Marnus Labuschagne for the third innings in a row, caught behind for 29. And it was 86 for four when Leach bowled Steve Smith, who missed a lazy dab and was bowled for 23.

But that was the high point of England’s day, as Khawaja and Green set about turning an advantage already worth 208 into a lead well beyond England’s means.

Green briefly looked troubled by Leach, who bowled his best spell of a difficult series, but settled down to play some thumping drives. Khawaja rarely looked troubled, despite a thick edge off Joe Root on 71 that might on another day have stuck in Pope’s gloves. 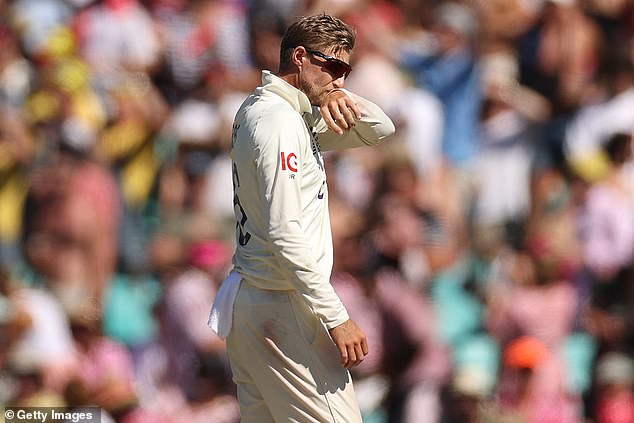 As the Barmy Army, baking in the sun, provided the vocals in the lower reaches of the Victor Trumper Stand, Khawaja supplied the eye-candy in the middle, even making slog-sweeps for six off both Leach and Root look like works of art.

And when he tucked Dawid Malan for a couple to bring up his 10th Test hundred, the crowd erupted, then broke into a chant of ‘Uzzie, Uzzie, Uzzie’. And why not: he had just scored more centuries in three days than England had managed all series.

Still Australia batted on, and the stand was worth 179 when Green skied a heave off Leach and was caught by Root for 74. Next ball, Pope reacted sharply to catch Alex Carey first ball – and equal the Test record of four catches in an innings by a substitute fielder.

Leach, meanwhile, had four for 84, tripling his series haul. A declaration from Cummins at 265 for six denied him the chance of an Ashes hat-trick, and left England 388. 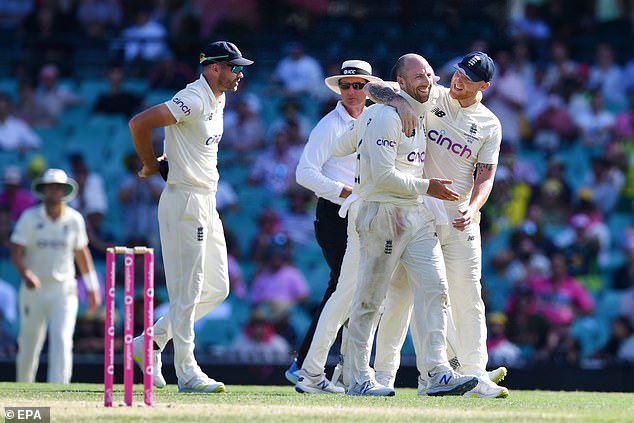 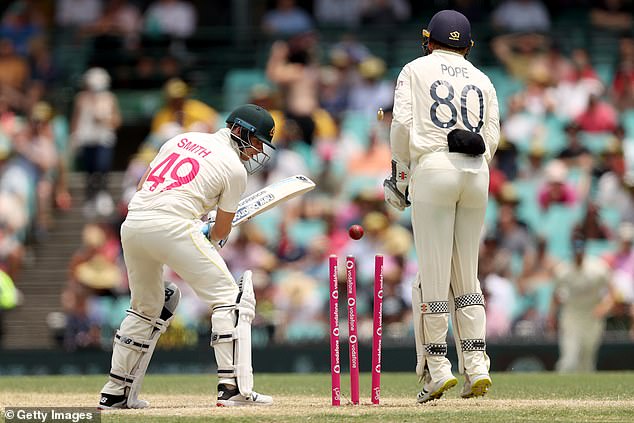 The tourists might have delayed the punishment had they extended their overnight 258 for seven beyond the 42 minutes they lasted in the morning.

With Jonny Bairstow 103 not out, the obvious gameplan was for the lower order to hang around and usher England to their first total this winter of 300 and beyond.

Instead, Leach – after a couple of chunky blows – tried to mow Nathan Lyon over midwicket and was caught at mid-on for 10. It was an unaccountable shot in the circumstances.

Bairstow added only 10 before he edged Scott Boland through to Carey, and England were all out for 294 as Stuart Broad – having connected with one or two blows – made a mess of a pull and was caught off Boland for 15. After the euphoria of Bairstow’s hundred the previous evening, it all felt rather anticlimactic. 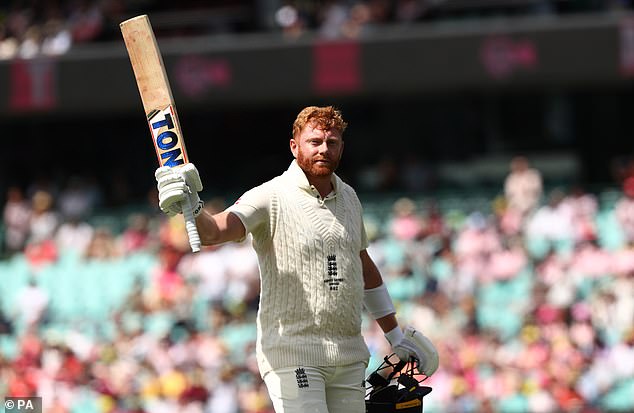 England have decisions to make before next week’s fifth and final Test at Hobart, and Bairstow is among them. On Friday night, he underwent a scan on his injured right thumb; his fate will be determined at the end of this game.

Buttler (left index finger) and Ben Stokes (tight left side) joined him under the X-ray, though the likelihood is both will miss Hobart, opening up the possibility of a Test debut for Sam Billings and a middle-order recall for Pope.

First, though, England have a Test to save. If they fail, they will fly to Tasmania needing to avoid defeat to avert a 5-0 whitewash, with goodness knows what consequences for the future of so many members of their exhausted dressing-room.