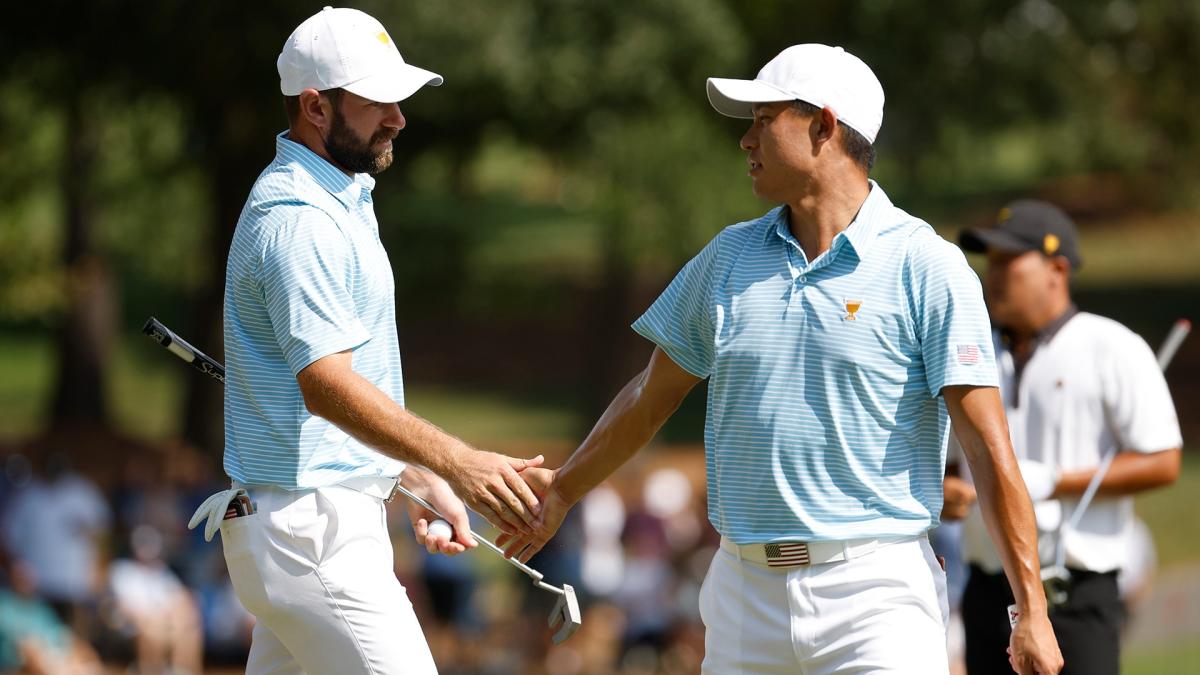 The U.S. won the session, 4-1, to lead entering Day 2, which will feature five fourball (best ball) matches. Here’s how the opening day played out in Charlotte, North Carolina:

Scott hit the opening shot of these matches and the Internationals only held the honor for one more hole. Cantlay and Schauffele dominated this match from start to early finish as they won the third hole with a par and then made four birdies in a five-hole stretch, beginning at the par-4 fifth.

The U.S. side built a 3-up advantage through 10 holes and the veteran International duo offered little resistance on the inward half. Scott and Matsuyama bogeyed Nos. 11-13 to give the U.S. the first point of the competition. Schauffele and Cantlay moved to 5-0 as a team in foursomes, in both Ryder and Presidents cups.

Spieth and Thomas combined for only two birdies, but they never trailed. It was a par, in fact, that provided the most compelling moment of the match.

See also  Tiger Woods' return at the Masters next week would give everyone a lift, says Rory McIlroy

Leading 1 up on the 15th hole, Spieth’s tee shot on the par 4 went left, hopping out of a hazard and into the deep rough. Thomas played a great approach shot that ran through the putting surface (with the hole in a front location) and Spieth then nearly putted off the green. Thomas followed by making the 27-footer for par.

It was also good enough to win the hole and go 2 up. They closed it out with two more pars. Spieth is now 6-0 in Presidents Cup foursomes.

Young and Morikawa made it 3-0 for the home team, despite being the only U.S. team that trailed over the first four-and-a-half hours on Thursday.

They bogeyed the second hole to fall 1 down and the match was never greater than a two-hole difference. It was tied through 12 holes, when Young and Morikawa birdied the par-4 13th to take an advantage they would never relinquish.

The rookie Young sealed the match with a 26-foot birdie at the 17th.

This one appeared to be similar to Match 1: Two good U.S. friends routing an overmatched International tandem. Scheffler and Burns were 3 up through seven holes, but Kim and Davis kept chipping away.

The visitors won the 15th hole thanks to a double bogey from the U.S. side and then won the 16th hole with a birdie of their own. Another birdie at the 17th gave Kim and Davis a 1-up lead with one to play.

Kim and Davis only needed a conceded par at the last to win their fourth consecutive hole and give the International team its first point.

This one was tight throughout, and its result was huge for both sides.

At the par-4 18th, Pereira pulled his tee shot into the left rough while Homa found the fairway. After Pendrith placed his second shot into a greenside bunker, Finau played his approach safely into the center of the green, 25 feet right of the hole.

Pereira splashed out to 12 feet. Homa missed his attempt for the win, but secured his team’s par, leaving Pendrith with a chance to tie the hole and the match. He missed, giving the U.S. a comfortable lead entering fourballs.