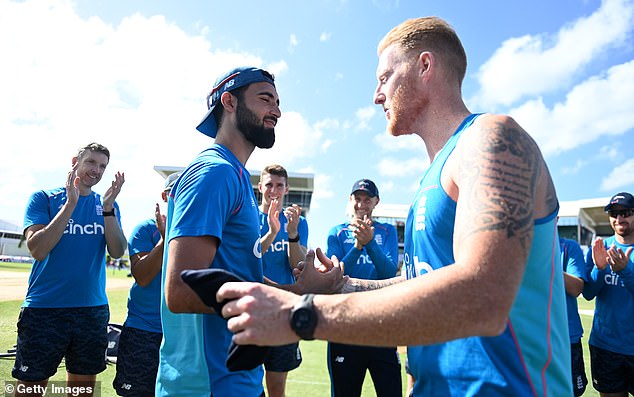 ‘To be given my cap by Ben Stokes was special’, says Saqib Mahmood as the England bowler admits there were times when he thought he may never make his Test bow

Saqib Mahmood has waited a long time to get a Test cap.

It was winter 2019 when he was called up to the senior squad in New Zealand and played his first one-dayer aged 22.

He must have thought a Test bow was round the corner. Not so, but Mahmood, now 25, finally made his red-ball debut in Barbados last week.

‘It was pretty surreal,’ Mahmood told Sportsmail ahead of the third and final Test against West Indies.

‘The day before, we were heading out for team photos. Joe Root pulled me aside and told me that he wanted me to make my debut. He said a few things after but I didn’t hear anything after he told me I was making my debut.’

He admits there were times he felt like it may not happen.

‘It did feel like a long time coming,’ he said. ‘You go on tours and sometimes you just know you’re not going to play. With this tour, it’s felt really different. I’ve started to feel like this was my team whereas in the past, when I was around the squad and not playing, it didn’t feel like that. 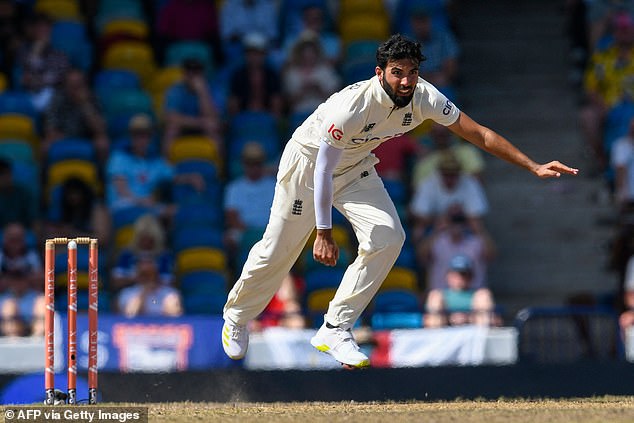 The England bowler impressed in Bridgetown, on a pitch that offered little to fast bowlers

‘And to be given my cap by Ben Stokes was a special feeling. Some of the words he said really hit home for me.’

Mahmood knows England’s attack needs to offer something different, particularly as they have not won any of their last 10 Tests overseas.

He impressed in Bridgetown, on a pitch that offered little to fast bowlers, with four for 79 across 35 overs.

‘I wasn’t put off by the wicket at all,’ said the Lancashire seamer. ‘Playing my first-class cricket at Old Trafford, the wickets are flat and if there’s no pace, like in Barbados, I’m used to that.’