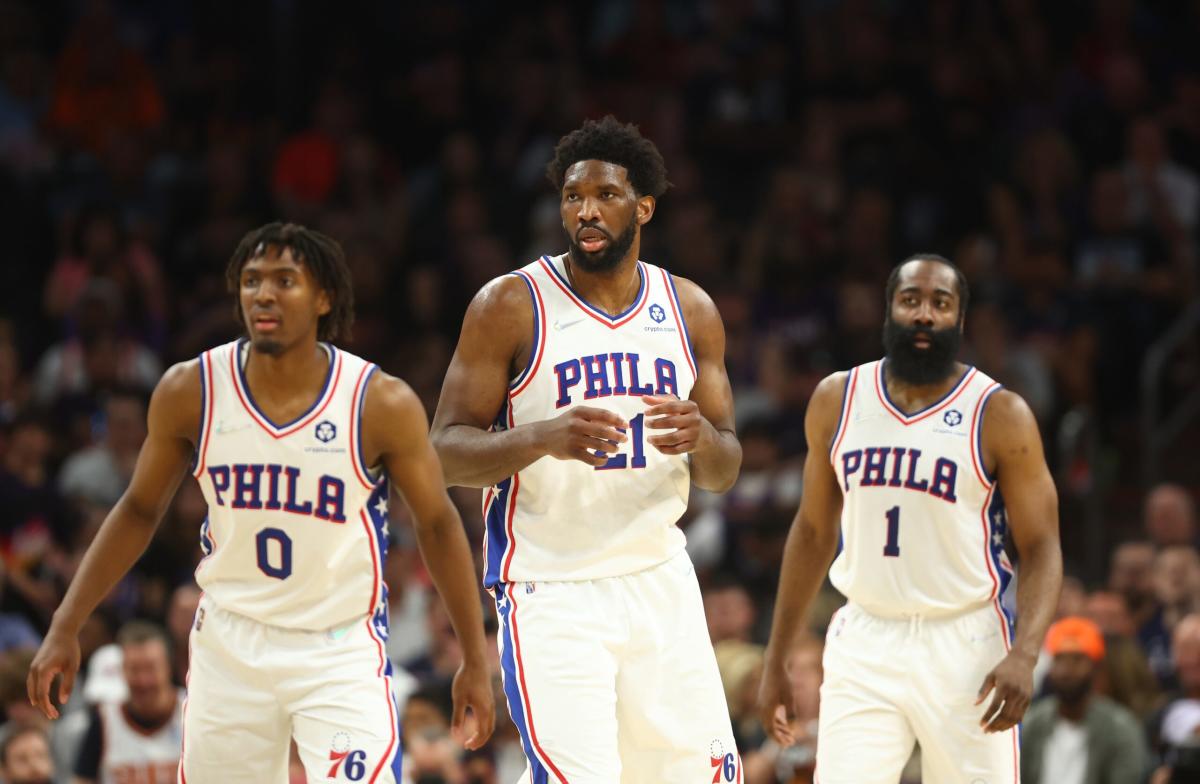 With NBA 2K23 out and the reviews praising the game as one of the best in the franchise’s recent history, we have decided to look at the game’s player ratings and examine the best Big Threes in the NBA, according to the 2K franchise.

This is a particularly interesting study this year because the NBA isn’t run by trios like it used to be even just five years ago. The league has much more parity now, with most top teams boasting an elite one-two punch surrounded by strong role players.

With that in mind, we truly had little idea who the best Big Threes in the NBA for the 2022-23 season would be, but thanks to NBA 2K23, we now have a better clue.

Let’s check out the results below.

Somewhat of a surprise at No. 1, the best Big Three for the 2022-23 season belongs to the Philadelphia 76ers behind Joel Embiid, James Harden and rising young star Tyrese Maxey. Philadelphia heads into next season with sky-high expectations, and if Maxey continues to develop at the rate he has, there isn’t a reason the Sixers wouldn’t be able to fulfill them.

A less surprising result at No. 2, as the Milwaukee Bucks’ Big Three of Giannis Antetokounmpo, Khris Middleton and Jrue Holiday has already won a championship together. Antetokounmpo remains one of the two or three best players in the world, Middleton is a proven championship-level sidekick and Holiday is one of the best defensive guards in the league.

Tumultuous wouldn’t even begin to describe the past 12 months for the Brooklyn Nets but even after all the turbulence experienced by the franchise, the team still has one of the best Big Threes in the NBA behind Kevin Durant, Kyrie Irving and Ben Simmons. Durant had a down playoff run by his illustrious standards but he’s still an elite scorer with a deep bag of moves. Irving, likewise, can give you buckets from all over the floor… that is, when he’s not missing games for one reason or another. And provided Simmons is healthy, he should give Brooklyn an elite defender and a plus-playmaker and transition scorer. Regardless, this is one of the least reliable Big Threes in the NBA, despite also being one of the most talented.

Coming off of quite an embarrassing end to their season, the Phoenix Suns will enter 2022-23 hoping to prove that their 2021-22 campaign was not a fluke and that they are true title contenders. Heavy expectations will be on the shoulders of their Big Three – Devin Booker, Chris Paul and Deandre Ayton – to at least get the team back in the Conference Finals.

More of a Big Two with a very strong role player behind it, the Boston Celtics check in at No. 5 on NBA 2K23’s list of best Big Threes. Jayson Tatum and Jaylen Brown are an elite 1-2 punch on the wing, capable of getting buckets from all over the floor, while Robert Williams is one of the best defenders in the NBA with elite shot-blocking prowess.

Another elite Big Two with a solid third piece, the Los Angeles Lakers still boast outstanding top-end talent… their problem is with the rest of their roster. Still, things could be worse, as LeBron James remains a freak of nature and is still one of the best players in the world, Anthony Davis, when healthy, is an elite two-way big man and Russell Westbrook… rebounds really well for a point guard. Joking aside, Westbrook and Patrick Beverley are both rated 78s, so pick whoever you want as the third member of the Lakers’ Big Three.

The Miami Heat caught flak this offseason for their lack of major moves, as well as for losing PJ Tucker to a top rival in the East, but the team still has a strong Big Three consisting of Jimmy Butler, Bam Adebayo and Tyler Herro. Butler is one of the best do-everything wings in the sport, Adebayo is ultra-talented and versatile for a center and Herro is a straight-up bucket-getter, one who could become a full-time starter in 2022-23.

It’s a new-age Big Three for the Golden State Warriors, the one constant from yester-year being Stephen Curry, who remains one of the league’s most explosive offensive dynamos. Now alongside him, according to NBA2K, is Andrew Wiggins, who looks so much better now that he’s no longer burdened with having to try and lead a team on his own as a former No. 1 overall pick. And alongside those two is Jordan Poole, Golden State’s own version of Herro who can fill it up from all over the floor on offense. For the record, Draymond Green and Klay Thompson are rated 83s like Poole, so choose who you’d like as Golden State’s third big piece.

In a very unique instance in NBA history, the Minnesota Timberwolves have a Big Three made up of two centers – Karl-Anthony Towns and Rudy Gobert –  to go with an exciting, explosive 2-guard in Anthony Edwards. Edwards has a chance to outplay this ranking, as his upside is enormous thanks to his three-level scoring and ridiculous athleticism. Meanwhile, it’ll be fun to see how Towns and Gobert mesh, both elite centers but elite in very different ways.

Under different circumstances, we might have seen the Los Angeles Clippers’ Big Three finish higher up on this list. Even as is, Paul George is probably underrated at an 88. Regardless, the uncertainty on Kawhi Leonard’s return following a major knee injury makes his mere 94 rating understandable. Rounding out this Big Three is Norman Powell, a solid role player who can get hot and fill up the score sheet on certain nights.