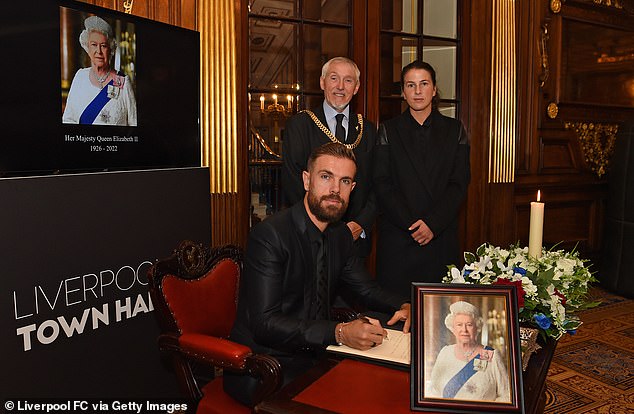 Liverpool have paid their respects to Queen Elizabeth II as Jordan Henderson and Niamh Fahey signed a book of condolence.

Henderson, captain of the men’s team, and Fahey, who skippers the women’s side, went to Liverpool Town Hall on Monday where they were welcomed by the Lord Mayor Roy Gladden.

Dressed in black, both left messages in the public book of condolence in tribute to the longest-serving monarch in British history, who died last Thursday aged 96. 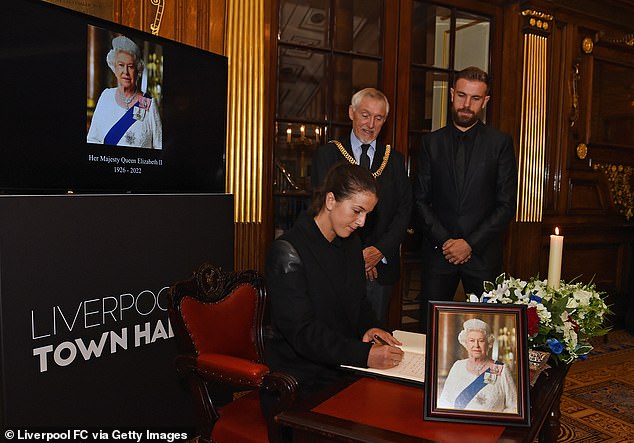 Niamh Fahey, the captain of the Liverpool women’s team, also left a tribute at the Town Hall

It came as Reds boss Jurgen Klopp said a minute’s silence ahead of Tuesday night’s Champions League game with Ajax at Anfield is a suitable way to show respect for the Queen.

Some Liverpool fans chose to boo ‘God Save the Queen’ when it was played at Wembley before their FA Cup final win over Chelsea back in May.

Asked about the minute’s silence at his pre-match press conference, Klopp said: ‘I think it is the right thing to do, but I don’t think our people need any advice from me to show respect.’

Klopp has pointed out that fans at Anfield gave Cristiano Ronaldo a minute’s applause in April after the tragic death of his baby son, despite the Portuguese star playing for one of the club’s biggest rivals, Manchester United.

The Queen, the longest-serving British monarch, died at Balmoral on Thursday aged 96

He admitted he was ‘proud’ of the fans’ reaction to Ronaldo, and feels this gives a good indication that supporters at the stadium will act respectfully during the minute’s silence.

See also  Liverpool fans react to news that Sadio Mane could join Bayern Munich: 'If he goes, I'll be fuming'

‘One, which surprised me, and I was really proud of that moment, was last year when we played Manchester United around a very sad situation around Cristiano Ronaldo’s family. For me, it’s clear that’s what we had to do,’ he added.

Klopp went on to pay his own personal tribute to the Queen, hailing her as a ‘warm and loving lady’ before confirming that he would honour the minute’s silence. 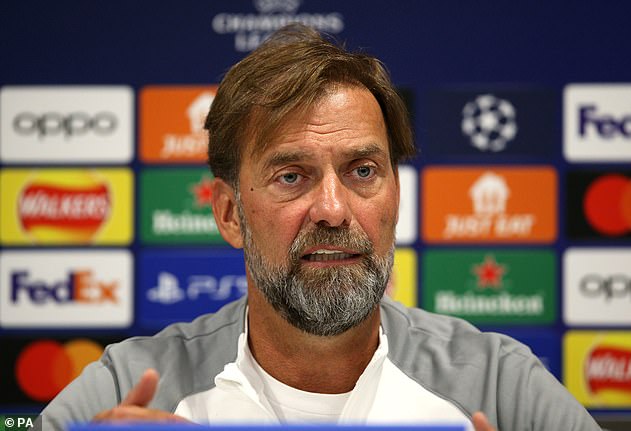 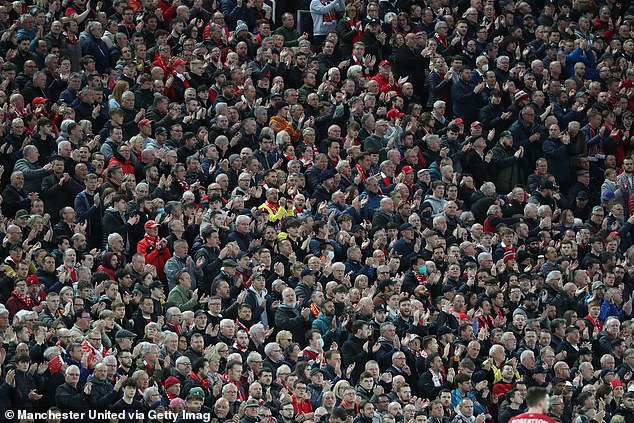 He continued: ‘She was a really nice, warm and loving lady. She’s the only Queen of England I’ve ever known. I didn’t know her but she was kind and warm. People feel so close to her and I respect their grief a lot.

‘I will show my respect tomorrow night with silence.’

While Liverpool game with Ajax will go ahead, there is doubt over Sunday’s Premier League match against Chelsea at Stamford Bridge.

There are concerns that police resources will be too stretched by the Queen’s funeral in London the following day and events over the weekend during 10 days of national mourning.