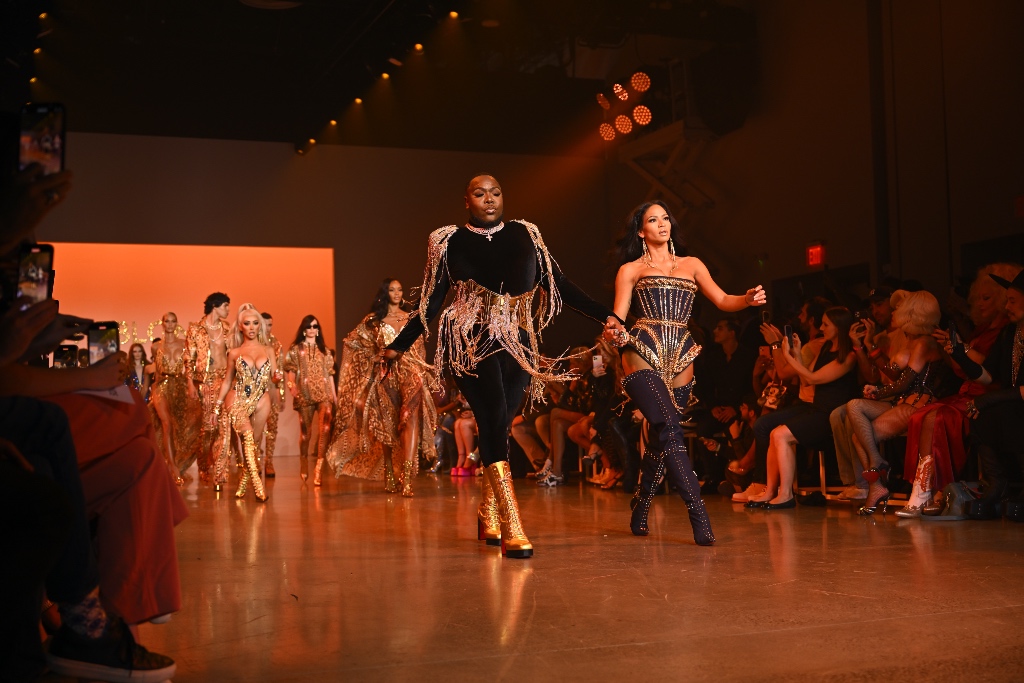 If anyone knows the power of glamour, it’s certainly the Blonds. Designer couple Phillipe and David Blond have been mainstays in the fashion industry for years, renowned for their elaborate embellished creations worn by Jennifer Lopez, Beyonce and Rihanna — to name but a few.

In fact, many of these women were on the Blonds’ moodboard this season. While simultaneously designing their Spring 2023 collection and creating photography book “The Blonds: Glamour, Fashion, Fantasy,” the pair rediscovered their own personal archives. A new inspiration ultimately became the duo themselves, reminiscing on their romantic meeting in Manhattan’s nightlife scene in 2000.

“We fell in love with dance music, hung out in the city, and that included people like Jennifer Lopez and Missy Elliott,” David recalled exclusively with FN backstage before the show. “It also leads back to this idea of the past merging with the future.”

Indeed, the riotous energy at the pair’s Spring Studios show seemed like a fashion homecoming. DJ’d by the Misshapes, Daphne Guinness, Amanda Lepore and Susanne Bartsch held court in the front row while Coi Leray, Gigi Gorgeous and Cassie — strutting to her 2006 hit “Long Way 2 Go” — walked in Y2K-inspired pieces coated in chains, crystals and link prints. Saucy Santana performed a musical set on the runway while Nikita Dragun twerked nearby. At one point, longtime Blonds model Kirill Kabachenko tore open his tank top, tossing shreds into the crowd before strutting on the runway in a printed speedo and platform boots. This new chapter of the Blonds’ fashion heritage, paired with the shows’ rock concert-esque energy — as guests described it at the Amrezy x Pretty Little Thing afterparty — certainly closed Fashion Week with a spectacle.

Also notable was the duo’s ongoing collaboration with Christian Louboutin, who designed custom shoes for the show. This year’s included platform boots, stiletto-heeled pumps and booties covered in matching prints, glitter and studs. Styles were developed after the Blonds sent Louboutin their textile materials — and even achieved their goal of bedazzling the designer’s signature red soles.

“We sent them the materials so that everything would match head to toe,” David said. “Obviously, one of our dreams was always to have crystals on the bottom of the shoes; it has a detail, it’s so cute because it’s hidden, and it takes it to that next level of luxury. Philippe’s developed a fondness now for platforms, so we’re into that.”

As The Blonds closed Fashion Week with a glitzy viral bang, I couldn’t help but wonder — do blondes, in fact, have more fun?

“Absolutely! Right? You need to go blonde,” Philippe proclaimed after the show. “I feel like everyone’s blonde at heart, truly.”