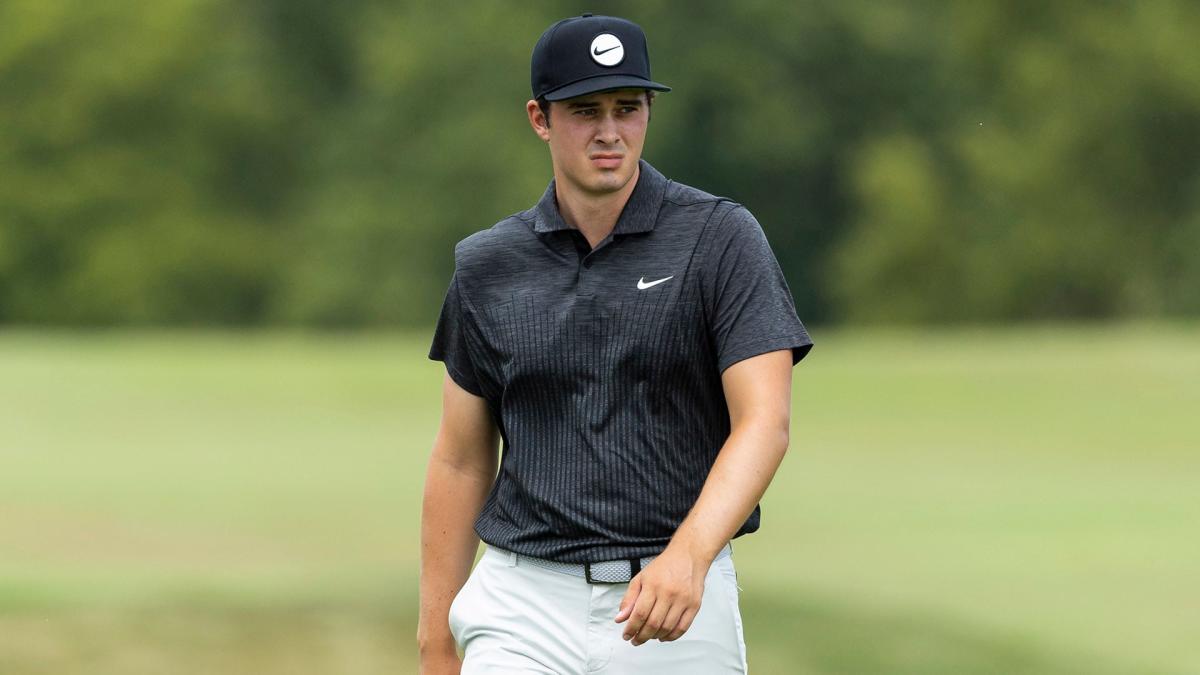 A new PGA Tour season is upon us, and that means a new class of rookies fresh off graduating from the Korn Ferry Tour.

Now, the criteria for being a PGA Tour rookie is a little nuanced. Even if a player will be entering his first season as a card-carrying Tour member, if he has logged at least seven Tour starts in any previous season, he has already exhausted his rookie eligibility and can’t be considered for Rookie of the Year. So, that rules out Justin Suh and M.J. Daffue this season.

However, there are still 28 rookies as part of this new crop, including several intriguing talents ranging from recent college grads to DP World Tour members to KFT veterans.

The past four Rookie of the Year winners did not win a Tour event during the season in which they received the honor. Aaron Wise was the last rookie to win on Tour, doing so at the 2018 AT&T Byron Nelson.

Will that trend be bucked this season? At least a few from this crew have that ability.

Age: 29
College: Illinois (2016)
OWGR snapshot: No. 126; 171 events, 1 win, 35 top-10s
Buzz: Unlike most of these rookies, Detry never played a KFT event until this year’s Finals, which he qualified for via non-member FedExCup points. Detry won on the Challenge Tour while setting the tour’s record for margin of victory (12 shots) in 2016 shortly after turning pro. He has since spent the past six seasons on the DP World Tour, where he’s notched five runner-up finishes.
Fun fact: In addition to golf, Detry played competitive tennis and field hockey growing up in Belgium.

Age: 23
College: Oklahoma State (2021)
OWGR snapshot: No. 243; 31 events, 4 top-10s
Buzz: Overshadowed for much of his amateur career by the likes of Matt Wolff and Viktor Hovland, Eckroat has quietly done everything you could want on his way to the PGA Tour. He was a four-time All-American at Oklahoma State, winning a team NCAA title in 2018. He was on a victorious Walker Cup team, helping the U.S. win at Seminole in 2021. He finished third in the inaugural PGA Tour University class. And after a solid first full KFT season with three top-10s among 10 top-25s, he earned his Tour card via the Finals. He’s got potential to be among the Tour’s elite drivers and he makes a lot of birdies, though if there’s one facet of his game that needs work, it’s his short game.
Fun fact: Eckroat got engaged to girlfriend Sally Merrill, whom he had been dating for about two years but has known since they were 18 months old, in May 2021. Their wedding is set for Nov. 19, so he’ll be missing the RSM Classic, the Tour’s fall finale.

See also  Brandt Snedeker is leading the Valero Texas Open and if he’s still in the hunt late, look out

Age: 26
College: North Carolina (2018)
OWGR snapshot: No. 181; 59 events, 1 win, 8 top-10s
Buzz: After logging just 35 world-ranked starts on multiple developmental tours, Griffin quit competitive golf in March 2021 and took a job as a financial mortgage loan officer. Retirement didn’t last long, however, as Griffin found his way back to the game that fall, making it through all three stages of KFT Q-School before notching three runner-up finishes and ending up eighth in KFT points after the regular season to lock up his PGA Tour card. Griffin ranked eighth in putting average last season on the KFT, though is there’s one area where he struggles, it’s usually off the tee.
Fun fact: Griffin’s great-grandfather, Benjamin Cowan Shields, pitched for the Yankees from 1923 to 1925 and seriously injured a lung after taking a Babe Ruth liner off the chest during batting practice. The lung became infected and he battled tuberculosis until his return to baseball in 1930 with the Red Sox. He also pitched for the Phillies the following season.

Age: 25
College: UNLV (2019)
OWGR snapshot: No. 250; 61 events, 2 wins, 10 top-10s
Buzz: The UNLV product by way of Cornwall, England, just held onto his full card during his debut KFT season in 2020-21, finishing No. 75 in points. He then won once and notched three other top-10s this year to finish No. 14 in regular-season points. At first glance, he looks like a hipster version of Bryson DeChambeau when he wears his Hogan cap and circle-framed sunglasses, but unlike DeChambeau, Hall isn’t crazy long and does his best work on and around the greens.
Fun fact: Hall belongs to same club in England, West Cornwall Golf Club, as Jim Barnes did. Barnes, who was nicknamed Long Jim, won four major championships – the 1916 and 1919 PGA Championships, 1921 U.S. Open and 1925 Open Championship.

Age: 27
College: UNLV (2017)
OWGR snapshot: No. 136; 65 events, 14 top-10s
Buzz: Talk about bad luck. Montgomery didn’t just finish No. 26 in regular-season points during the KFT’s super season in 2020-21 to miss out on his PGA Tour card, he was also the first man out of getting his card via the Finals that year. Making matters worse, Montgomery had missed a start during that season after qualifying for the 2021 U.S. Open, where he tied for 57th. He also earned his way into this summer’s U.S. Open, though he didn’t have to worry about his PGA Tour card as he easily locked that up with nine top-10s in just 17 KFT starts. The UNLV grad does a lot of things well – drives it far, hits greens and makes birdies (No. 1 on KFT this season). His 68.36 scoring average also was tops on the KFT this year.
Fun fact: Montgomery’s father, Monte, is the general manager at Shadow Creek Golf Course in Las Vegas.

Age: 24
College: Louisville (2021)
OWGR snapshot: No. 205; 50 events, 7 top-10s
Buzz: The German’s T-8 finish at the Barbasol this summer helped qualify him for the KFT Finals, where he earned his PGA Tour card with a top-10 in Columbus, Ohio. He’s played mostly on the DP World Tour since turning pro two summers ago after a successful amateur career that included two European Amateur titles and low-amateur honors at the 2021 Open. His highlight finish on the DPWT, where he was Rookie of the Year last season, is a runner-up at the Dutch Open last September. Schmid is long and a great iron player, but he can get cold with the flatstick.
Fun fact: Father, Matthias Sr., was a club professional where Schmid grew up in Maxhuette, Germany.

Age: 26
College: Oklahoma State (2018)
OWGR snapshot: No. 401; 50 events, 1 win, 7 top-10s
Buzz: Stevens was a member of Oklahoma State’s 2018 NCAA title squad, though he wasn’t in the starting lineup nor was he the substitute. When he turned pro, Stevens played regularly on PGA Tour Latinoamerica, winning an event in June 2021, but he has been known for dominating at the mini-tour level, particularly on the All Pro Tour, where he’s won six times since graduating. He earned his KFT card through Q-School before posting 11 top-25s in 23 starts and then tying for 12th at the KFT Championship to clinch his PGA Tour card via the Finals. Stevens ranked third in GIR on the KFT last season.
Fun fact: Stevens’ grandfather, Johnny, made 30 career PGA Tour starts in the 1960s and his father, Charlie, played two Korn Ferry Tour events in 1992.

Age: 23
College: Georgia (2021)
OWGR snapshot: No. 258; 35 events, 1 win, 4 top-10s
Buzz: The Georgia standout was a Walker Cupper in 2021, former top-ranked amateur in the world and graduated as the No. 2 player in the inaugural PGA Tour U race. He kept his KFT card via Q-School before finishing 14th in regular-season points, a position boosted by his win at the Rex Hospital Open in June. Thompson is world-class tee to green and he doesn’t have any major holes in his game, but above all, he just looks like a PGA Tour mainstay.
Fun fact: As a prep junior in 2016, helped his high school, Lee-Scott Academy in Auburn, Alabama, to a state title in basketball. That was in addition to the six state team titles and two state individual titles he won in golf.

Age: 24
College: Arizona State (2021)
OWGR snapshot: No. 246; 47 events, 9 top-10s
Buzz: Had last year’s KFT campaign not been a super season, Yu would’ve earned a spot in KFT Finals. Instead, his strong opening summer (a T-2, T-5 and three other top-25s) after finishing fourth in PGA Tour U left him with basically nothing, so he had to go to Q-School. Luckily for Yu, he kept his card and ended up overcoming a slow start by turning in three top-3 finishes from May on to sneak inside The 25 at No. 20, clinching his PGA Tour card. Yu, a former top-ranked amateur in the word whose 70.46 career stroke average at Arizona State ranked only behind Jon Rahm, drives the ball at a very high level, ranking second in total driving last season on the KFT. His irons can get off, but overall, he’s got a nice all-around game.
Fun fact: Yu started playing golf at age 5 as his father, Tommy, played professionally before becoming a teaching pro and buying a driving range in Taiwan. Yu attended a golf academy in the U.S. and verbally committed to Arizona State before even stepping on campus.

Age: 25
College: Washington (2018)
OWGR snapshot: No. 99; 100 events, 2 wins, 24 top-10s
Buzz: Yes, you’re reading that correctly – Yuan has finished in the top-10 in nearly a fourth of his professional starts, which have mainly come on the KFT and before that PGA Tour China. He won the KFT’s regular-season points list this year behind a win and three other top-3 finishes. He ranked third in the KFT’s all-around ranking, fourth in scoring average and eighth in GIR while also being a top-50 putter and scrambler. Of course, it doesn’t always look that way; Yuan is a quirky player, with crazy follow-throughs (he’s Ho Sung Choi, but actually good) and a care-free personality. He’ll be fun to follow on the big stage.
Fun fact: Yuan was born in China, but he attended Eagles Dream Golf Academy and Lake Mary Prep in Orlando, Florida.