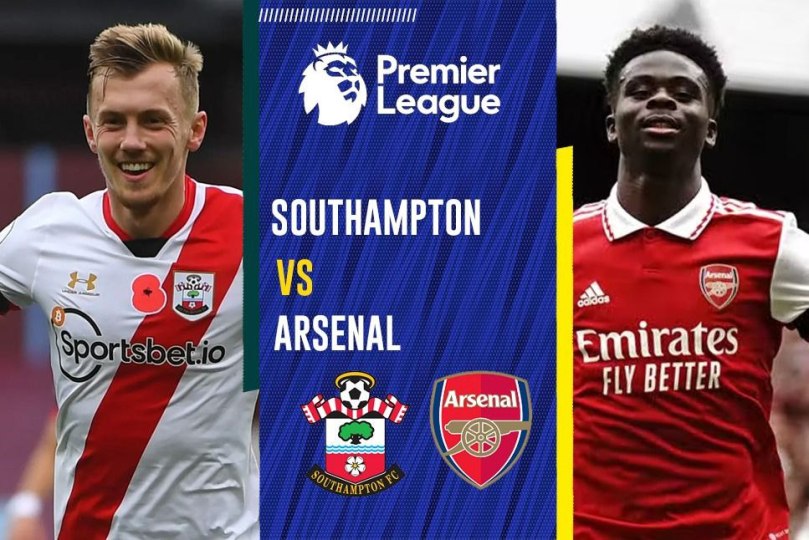 Southampton is winless in their last five fixtures and will be desperate for any kind of positive result against the table toppers. Their last competitive win came back in August when they caused a major upset over Chelsea at home, winning 2-1, and will hope for a similar sort of performance on Sunday. The Saints have several injury concerns within their squad though and will face an uphill task against the high-flying Gunners.

Arsenal is in ominous form and has notched up seven victories in their last seven competitive matches. Four of those victories have come in the Premier League including one in the North London Derby and another in a high-voltage clash against rivals Liverpool. Arsenal didn’t play in the last game week due to their Europa League commitments and will be able to field a well-rested first eleven against the Saints.

Southampton has major injury concerns in both defense and midfield. Defenders Bella-Kotchap (shoulder dislocation) and Tino Livramento (knee injury) are long-term absentees while midfielder Romeo Lavia is unlikely to be fit in time for the clash.

Ainsley Maitland-Niles will also miss the clash as he is ineligible to face his parent club as per contract. Former Arsenal star Theo Walcott is however likely to be a part of the matchday squad against his ex-team.

Arsenal has no major concerns going into this fixture. Long-term absentees Emile Smith-Rowe (Groin) and Elneny (hamstring) will miss this clash. Oleksandr Zinchenko has recovered and will be fit in time for the match – a huge boost for the Gunners. Arteta will be relieved that he can field his preferred first eleven as the squad looks fit and in good shape.

Southampton vs Arsenal LIVE: When and where to watch the live streaming of Premier League matches?

When will Southampton vs Arsenal kick off in the Premier League? – Date

Southampton vs Arsenal match will be played on 23rd October 2022

What time will Southampton vs Arsenal kick off? – Time

Southampton vs Arsenal will begin at 06:30 PM IST

Where will Southampton vs Arsenal be played? – Venue

The game will kick-off at Saint Mary’s stadium

Premier League: Who will be the Match official? Referee

The referee for Southampton vs Arsenal is unknown as of now.

How do I watch live streaming of Southampton vs Arsenal?

Southampton vs Arsenal will be live streamed on Disney+ Hotstar VIP. The fans will have to subscribe to Hotstar’s VIP plan to stream the Premier League matches live. Indian Premier League fans can also stream the match live on Jio TV.

Which TV Channel will telecast Southampton vs Arsenal live?

The fans will get to watch English Commentary on Star Sports Select and apart from that regional fans will also get the opportunity to watch the match in their favorite language. Regional commentary in Bangla and Malayalam will be made available for key weekend matches on Star Sports 3 and Star Sports 1 Bangla.