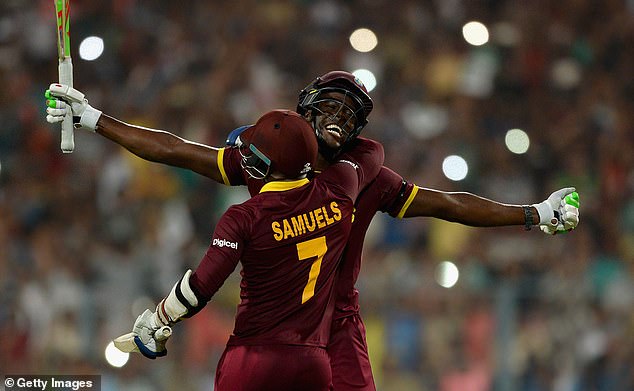 It’s been five and a half years since England’s most recent game at a Twenty20 World Cup ended in a hail of sixes from Carlos Brathwaite and the sight of Ben Stokes disconsolate amid the mayhem at Eden Gardens.

Neither man will be in Dubai on Saturday – Brathwaite was dropped two years ago, while Stokes remains in recuperation. But there could scarcely be a more testing tournament opener for both sides.

Reigning champions West Indies against an England team led by a captain, Eoin Morgan, who is hoping to become only the second man after India’s MS Dhoni to lift both the 50-over and T20 titles – and the first to hold them simultaneously. 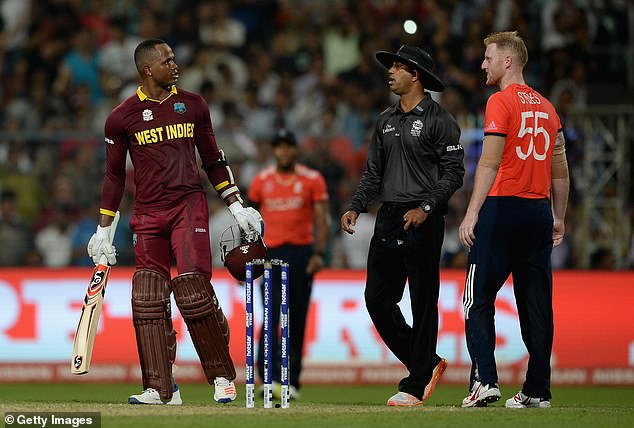 Form and rankings point in one direction. England, the No 1 side in the world, have won nine and drawn one of their last 11 T20 bilateral series, including a 3-0 victory in the Caribbean in early 2019. West Indies, eight places below them, are nothing if not hot and cold.

But the slow pitches of the UAE will test the ingenuity of England’s strokemakers in the coming weeks, and West Indies – propelled by the likes of Evin Lewis, Chris Gayle, Kieron Pollard and, if fit, Andre Russell – know how to clear the ropes in any conditions.

Then there are the events of Kolkata 2016, long enough ago to be dismissed as irrelevant, but sufficiently spectacular to linger in memories. On Friday, the two captains had predictably different takes.

Asked if England – whose squad include seven of the 11 from that night – still bore any scars, Morgan had a one-word answer: ‘No.’

He was pushed to elaborate: ‘Some of the biggest disappointments in anyone’s career are more learnings than scars. If they were scars, we would have lost a lot of players who wouldn’t have progressed like they have done.’

Pollard had less need to tiptoe around the subject. ‘It will definitely be in the back of their minds,’ he said. ‘What Carlos did was unbelievable. We watched it last night, and it brought goosebumps back to us.

‘It shows that never-say-die attitude. As a team we look forward to trying to replicate winning the tournament, but those moments stick with us.’ 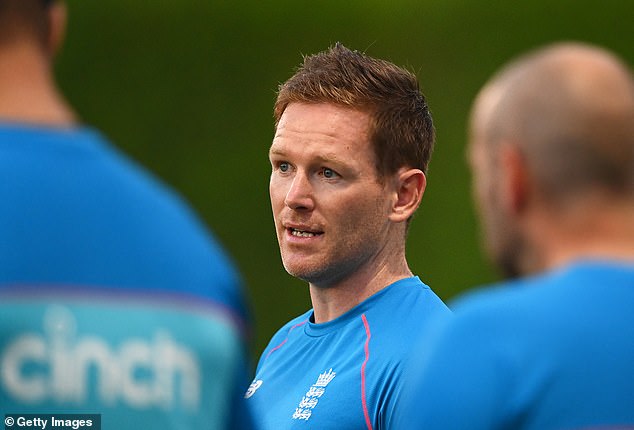 Victory today in the stifling heat of the Gulf, where evening dew can make bowling second a hazard, will be a big step towards qualification for the semi-finals – not least because the remaining two places in Group 1 have now been filled by two Test sides in Sri Lanka and Bangladesh.

But Morgan’s ice-cool aura has survived a wretched sequence with the bat, and he spelled out his team’s requirements with reassuring clarity.

‘You don’t have to be the best team in the tournament right from the very beginning,’ he said. ‘But you need to be the smartest, the most experienced, the most adaptable side, in order to do well in the early stages of the tournament.’

He also played down the suggestion that this competition represents a ‘last hurrah’ for the current squad – himself included. 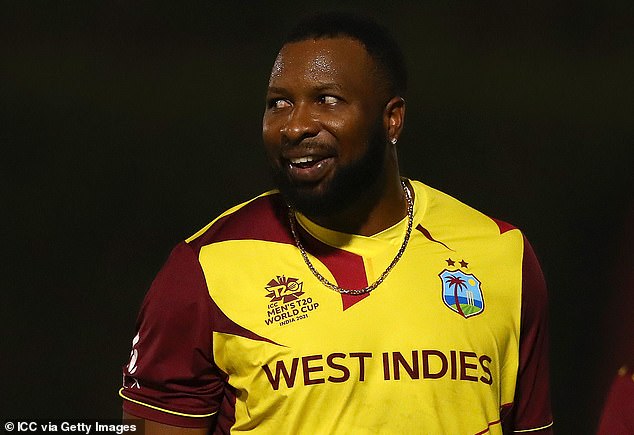 West Indies captain Kieron Pollard, however, insisted it would be in the back of England’s mind

‘When you look at the mainstays of the group that have been around the longest, they’re coming into the peak of their powers really – Buttler, Stokes, Archer, Roy, Bairstow, guys like that coming through, they’ll definitely play the next T20 and 50-over World Cups.’

A more pressing matter is the identity of England’s strongest side. Dawid Malan remains the world’s No 1 T20 batsman, but managed a total of just 29 off 33 balls during the warm-up games against India and New Zealand, and prefers pace on the ball.

With Morgan struggling for runs too, however, England may consider the bolder option of playing Moeen Ali at No 3 instead, which would allow room for six bowlers, plus the both-way allsorts of Liam Livingstone.

Another option is to play both Malan and Ali, who made a powerful unbeaten 43 off 20 balls against India, and was recently honing his skills on Emirati surfaces at the IPL. And that would mean no place for Livingstone, who went off the boil in the same tournament with Rajasthan Royals. 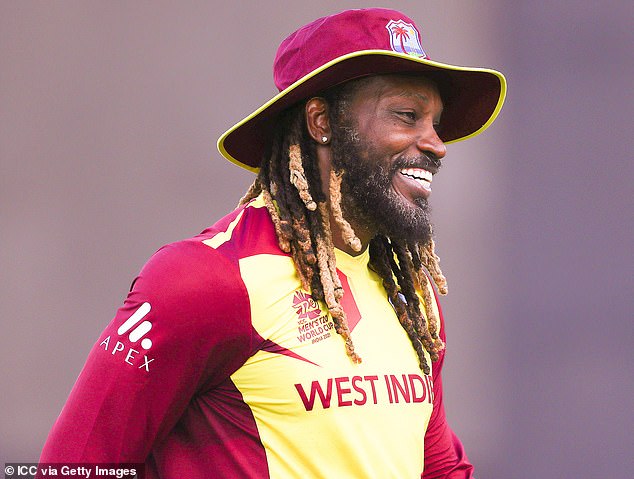 Powerful batter Chris Gayle, 42, is a dangerous opponent and can hit sixes in all conditions

Whatever line-up England choose, there will be no guarantees in a group that also includes Australia and South Africa, who today get the Super 12 stage underway 85 miles down the coast in Abu Dhabi.

And even if Morgan’s team do get through, they will probably have to overcome tournament favourites India – the only team to have beaten them in a bilateral series in over four years.

The captain, though, has never been one to fret about the opposition. ‘The name of the country on the shirt is irrelevant really when it comes to a World Cup,’ he said. ‘You need to prove your worth through performance.’

Exorcising the demons of Eden Gardens would be a good way to start. 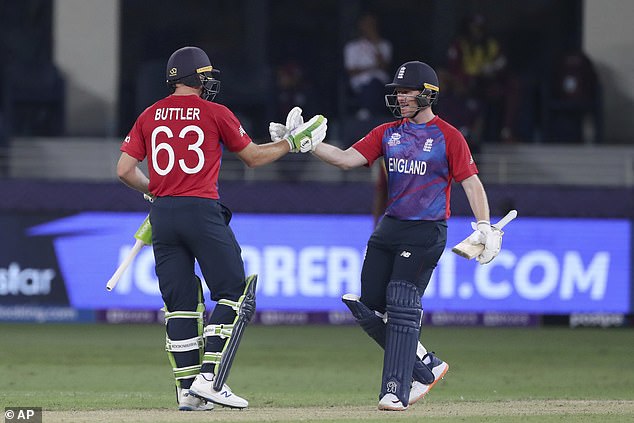 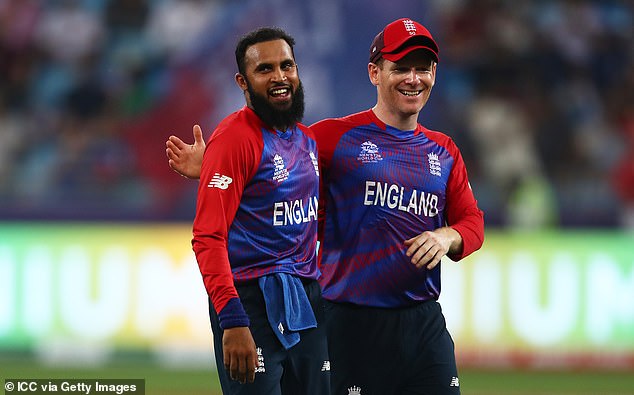