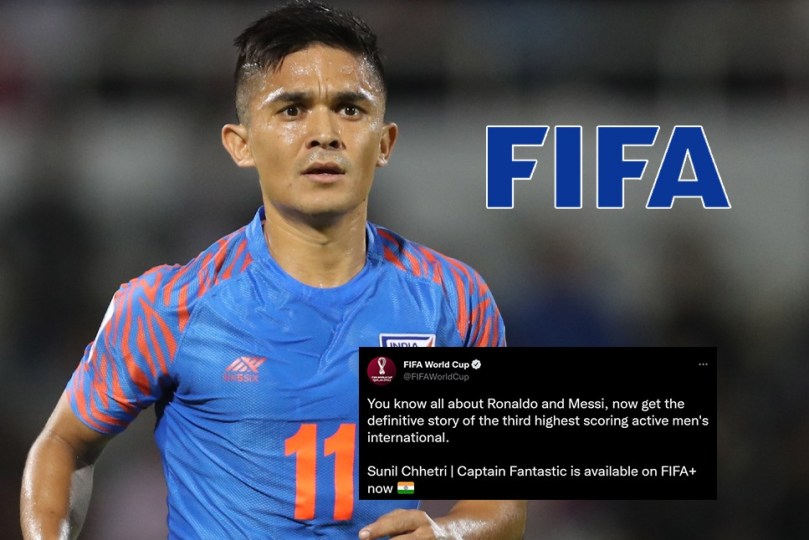 Sunil Chhetri Documentary Series: FIFA on Tuesday released a documentary series on Indian football team captain Sunil Chhetri. There are three episodes of the “Captain Fantastic” series, which is accessible through FIFA+. Chhetri’s international goalscoring exploits are exceptional considering he is the third highest scoring active men’s international. The Indian skipper is only behind Portugal’s Cristiano Ronaldo and the Argentine Lionel Messi in terms of most goals scored. Follow InsideSport.IN for LIVE updates about Indian Football Team

Read More: India vs Vietnam LIVE: Sunil Chhetri UNHAPPY with India’s performance against Singapore, says ‘We have to really Work hard’ – Check Out

Not to forget that Chhetri represents a nation that has not yet participated in the FIFA World Cup. But his inclusion in a series by the organisation that governs international football is exceptional and could be a waypoint for the world into Indian football.

Among active players, the 37-year-old India is currently the third-highest goal scorer in international football. With 117 goals, Ronaldo tops the list, and Chhetri is only six goals behind Messi’s 90 goal total.

Chhetri has played 131 games and scored 84 goals for the Indian team during the course of his illustrious career.

You know all about Ronaldo and Messi, now get the definitive story of the third highest scoring active men’s international.

The first episode of the series takes viewers back to where it all started for Sunil Chhetri, India’s talismanic captain. This fly-on-the-wall saga unearths untold tales of the man who would be captain — from his precocious pre-teen angst, to the first embers of his long romance with his future wife — all leading up to his India debut at the age of 20. Close associates, loved ones, and footballing colleagues help tell the tale — apart from the man himself, the man affectionately dubbed, ‘Captain, Leader, Legend’.

The second episode of the series follows Sunil Chhetri as he starts to perform wonders for his national team, and slowly becomes a fixture. Meanwhile, he pursues his big dream — to play professional football for a top-class overseas club. Triumphs and tribulations follow, as he sees some dreams fulfilled — and others broken.

In the third episode of the series Sunil Chhetri reaches the zenith of his professional career and his personal life. Trophies pile up and records are shattered, as Chhetri’s notoriety and on-field performances inch upwards. Chhetri’s ongoing ‘Last Act’ may prove to be the most successful and jaw-dropping of them all.