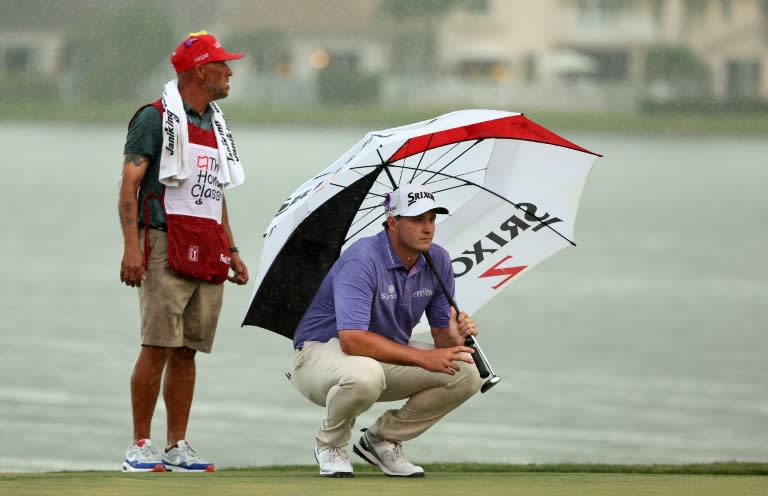 Sepp Straka became the first Austrian player to win a PGA Tour event on Sunday after conjuring a late birdie blitz to snatch victory at the Honda Classic as overnight leader Daniel Berger suffered a final round meltdown.

The Vienna-born Straka conjured three birdies in his final five holes – including a birdie on the 18th – to card a four-under-par 66 for a one-shot victory at PGA National in Palm Beach Gardens in Florida.

Straka, who moved to the United States with his family as a teenager, fired a final-round 66 that left him on 10 under for the tournament with a 72-hole aggregate 270.

The 28-year-old sealed victory after rolling a long eagle putt to within a few inches on the 18th for a simple tap-in birdie as torrential rain lashed the course.

That meant the chasing Irishman Shane Lowry had to birdie the last to force a playoff, but the 2019 British Open champion could only make par.

Straka had surged into contention as third round leader Berger endured a miserable final round.

Berger had played flawlessly over the opening 54 holes to take a five-shot lead on Saturday.

But that healthy cushion evaporated in the space of the opening six holes on Sunday, with a double-bogey seven on the third followed by back-to-back bogeys on the fifth and sixth holes.

See also  Angel Cabrera convicted of another assault, will serve an additional 28 months in jail

That opened the door for Lowry, who moved to the top of the leaderboard with birdies on the first and fourth holes.

The Irishman extended his lead after rolling in a 13-foot birdie putt on the 11th before being pegged back by Straka’s late charge.

The Austrian drained a 10-foot putt for a birdie on the 14th and then made an 18-footer from the apron to grab a share of the lead at nine under on the 16th.

His birdie on the last gave him sole possession of the lead to pile the pressure on Lowry.

Lowry, however, was unable to force the playoff, finishing with a three-under-par 67, nine under overall.

Berger meanwhile had given himself a fighting chance after his rocky start after chipping in from just off the green on the 14th to move within one of the lead at eight under.

But Berger’s challenge ended after he found the water on 18, leaving him with a four-over-par 74 to finish fourth on seven under.

Kurt Kitayama was third after a final round two-under-par 68.