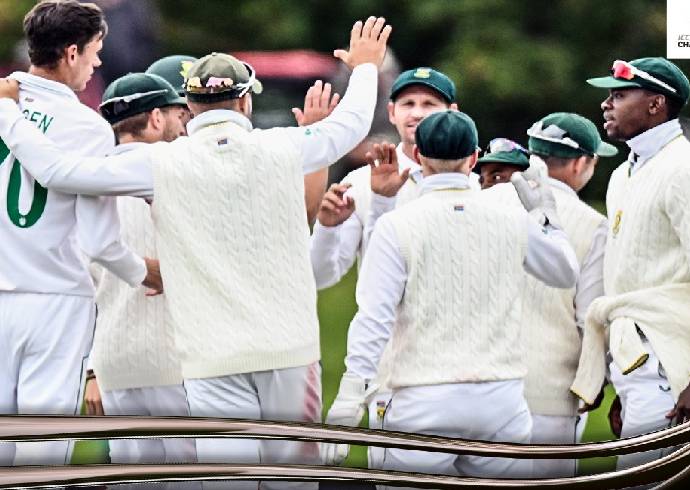 As the Day 5 started New Zealand required 332 runs to win the test or bat 90 overs to draw the match.

New Zealand have lost five for 54 on the final day on a pitch that had something in it for quicks throughout the five days.

Kagiso Rabada has picked eight wicket in the match so far and Marco Jansen seven.

Both overnight batsman – Devon Conway for 92 & Tom Blundell for 44 were returned back to pavilion before LUNCH.

New Zealand Chase 426 Runs: After securing a fantastic win by an inning and 276 runs in the first Test, New Zealand have struggled to get going in the second match.

South Africa scored 364 runs in the first innings, while in reply, the Kiwis could only accumulate 293 runs – since than it has been battle downhill for the Kiwis.

Entering into Day 5, South Africa are six wickets away from victory in the second Test, and denying New Zealand the opportunity to get a first Test series win over them.

Day 5 Challenge for Kiwis: New Zealand need 332 more runs to pull off the highest successful chase in Test cricket or bat out the final day and draw the second Test.

With a minimum of 90 overs left, New Zealand need to score at a rate of and 3.7 and with signs of uneven bounce and turn, that appears unlikely.

New Zealand Batting – ALL OUT for 227