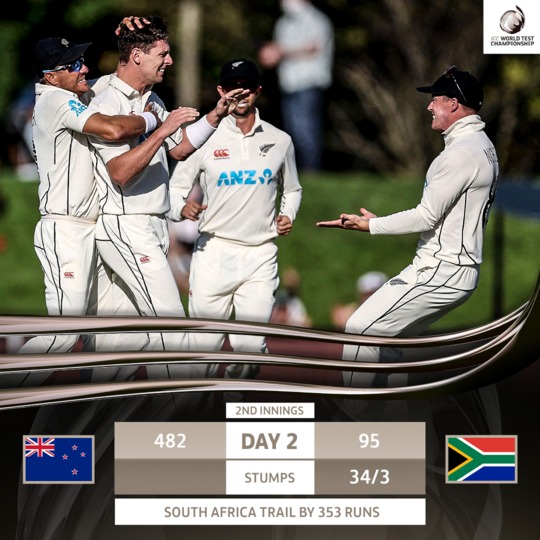 NZ vs SA Day 3 LIVE: South Africa stare at innings defeat: The visitors are on the edge in the opening Test against New Zealand. After getting all out for just 95 runs, the top-order once again failed to deliver and tottered at 34/3 on Day 2. Batting first, the Blackcaps slammed 482 runs to keep them on the driving seat.Henry Nicholls (105) and Tom Blundell (96) starred with the bat as New Zealand dominated South Africa on Day 2 of the ongoing first Test here at the Hagley Oval. Follow New Zealand vs South Africa Day 2 LIVE Updates

At stumps, South Africa’s score read 34/3 — still trailing by 353 runs. Rassie van der Dussen (9*) and Temba Bavuma (22*) are unbeaten at the crease for the visitors. Trailing by 387 runs, South Africa got off to the worst start possible as the visitors lost opening batter Sarel Erwee (0) on the second ball of the innings. Proteas skipper Dean Elgar (2) then departed on the bowling of Matt Henry and the visitors were left reeling at 2/2.

South Africa trail by 353 runs at stumps on day two.

New Zealand were dominant in all three sessions and sit in a very comfortable position in the first Test.#NZvSA | #WTC23 pic.twitter.com/quK25g0Wzv

Southee then removed Aiden Markram (2) and Proteas were reduced to 4/3. In the end, Rassie van der Dussen and Temba Bavuma ensured that South Africa does not lose more wickets before the close of play on Day 2.

Earlier, resuming Day 2 at 116/3, overnight batters Henry Nicholls and Neil Wagner grinded it out in the middle and the duo added 75 more runs to the total Wagner (49) was finally sent to the pavilion by Kagiso Rabada and this reduced the Kiwis to 191/4.

Nicholls (105) managed to go past the three-figure mark and this ensured that the hosts extend their lead to above 200. Tom Blundell and Colin de Grandhomme also chipped in with crucial knocks as New Zealand completely dominated proceedings.

In the end, Blundell along with Matt Henry frustrated the Proteas bowlers, and both batters put on 94 runs for the final wicket. New Zealand was bowled out for 482, with a lead of 387.

On Day 1 the home team had bundled out South Africa for only 95. Matt Henry registered a record 7 wicket haul. The Kiwis finished Day 1 at 116 for the loss of three wickets, taking a lead of 21 runs.

See also  BUMBLE ON THE TEST: Saqib Mahmood should have opened and Jos Buttler will be cursing his luck

A special day and a record performance! @Matthenry014 delivers the @ANZ_NZ Play of the Day at Hagley Oval. #NZvSA pic.twitter.com/DMO6Ne36Tz

NZ vs SA LIVE Score – Chasing their first Test series victory against South Africa, the champions of the inaugural World Test Championship, made a belligerent start on Day 1 with pacer Matt Henry completely destroying the South African batting order. Henry, who was drafted into the team as a replacement to Trent Boult picking 7 wickets for just 23 runs, recording New Zealand’s third best Test figures ever in an innings.

Winning the toss and opting to field first, Henry made full use of the green top that was on offer and troubled the Proteas batsmen with his swing and seam movement. He never allowed any batsman to settle as he cleaned up Dean Elgar, Aiden Markram and Rassie van der Dussen with South Africa registering just 37 runs on the board. He then came back and cleaned up the tail producing a terrific bowling display.

NZ vs SA LIVE Score – Day 2 LIVE Updates: South African seamers too bowled well but the Kiwi opening pair of Tom Latham and Will Young was too good and played the waiting game. Their patience however couldn’t last long as Marco Jansen provided the first breakthrough by dismissing Young. Duanne Olivier then dismissed Latham and towards the end of the day he broke a 75-run partnership between Devon Conway and Henry Nicholls to bring back South Africa into the game.

NZ vs SA LIVE Score – Day 2 LIVE Updates: Henry Nicholls unbeaten on 37 will look to play a good knock to help Kiwis take a big lead. New Zealand have a good middle order with Daryl Mitchell, Tom Blundell and Colin de Grandhomme yet to bat. Meanwhile, South Africa has a four-pronged pace attack with Kagiso Rabada, Duanne Olivier, Marco Jansen and debutant Glenton Stuurman. Rabada bowled well but didn’t get any success. With Stuurman playing just his first Test and Jansen playing his second series, Rabada and Olivier must lead the attack and have to take quick wickets tomorrow to stand any chance of making a comeback in this Test match.

South Africa 1st Innings – SA All Out for 95 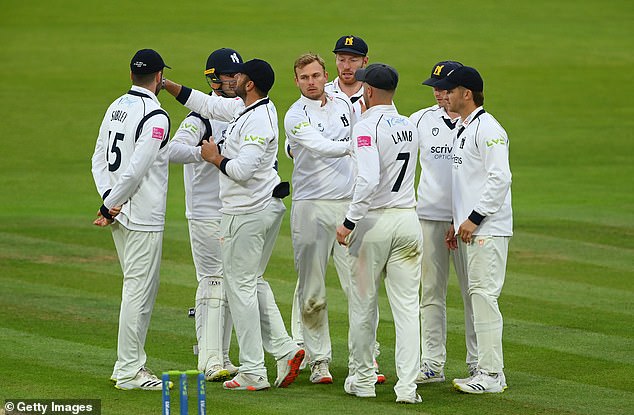