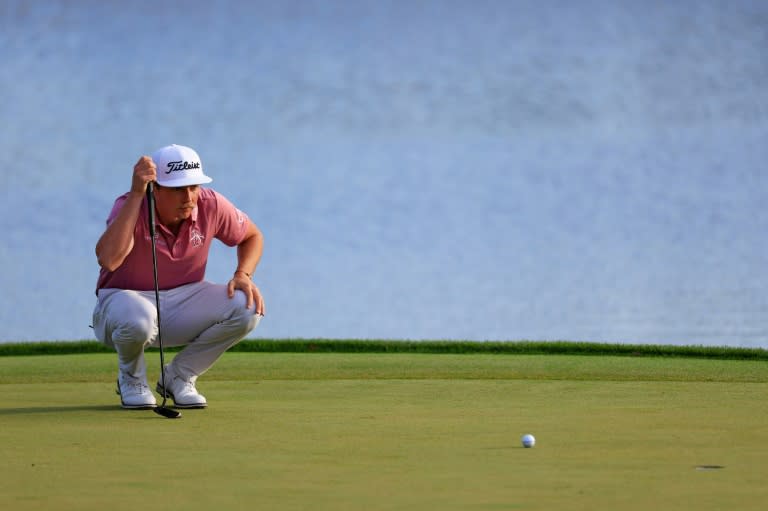 Australia’s Cameron Smith charged to victory at the PGA Tour’s weather-disrupted Players Championship on Monday, carding a closing six-under-par 66 to win by one shot.

The 28-year-old Queenslander roared into contention on a congested final day at TPC Sawgrass in Ponte Vedra Beach, Florida with five birdies in his opening six holes.

It was Smith’s second victory of 2022 following victory at the Tournament of Champions in Hawaii in January, and was made even sweeter by the presence of his mother Sharon and sister Mel to witness the victory.

Smith said he had not seen his family for more than two years until recently due to Covid-19 travel restrictions.

“It’s really cool to have them here,” Smith said, his voice cracking with emotion. “My main priority was just to hang out with them.

“Golf was second for these few weeks, so it’s nice to see them and nice to get a win for them.”

Smith’s final round 66 left him on 13 under 265, one ahead of India’s Anirban Lahiri, who shot a closing 69. England’s Paul Casey was third on 11 under while Kevin Kisner was fourth on 10 under.

Weather disruption that wiped out swathes of play on Thursday and Friday meant the final round was only completed early Monday, with Smith two adrift of Lahiri, the 54-hole leader on nine under.

Smith’s final round got off to a flying start, with a 38-foot birdie putt on the first to move to within one of the lead.

He went two clear with his fourth birdie on the fourth.

Another birdie putt from 10 feet on the sixth hole preserved his two-shot advantage before three straight bogeys on the seventh, eighth and ninth holes allowed England’s Paul Casey and Keegan Bradley to join him at the top of the leaderboard.

But Smith then responded with a sensational start to the back nine which mirrored the start of his round, making four straight birdies on the 10th, 11th, 12th and 13th to regain a two-shot lead.

There was a wobble on the par-five 16th when his tee-shot flew into the trees flanking the left hand edge of the fairway. But he recovered brilliantly to make par.

Then on the iconic par-three 17th, Smith bravely blasted a nine iron to four feet for a birdie which left him three shots clear heading to the 18th.

Yet there threatened to be a plot twist at the last, when another wayward tee shot left him in the rough amongst the trees.

An attempt to chip safely onto the fairway ended in disaster when the Australian’s ball rolled into the water forcing him to drop.

But once again Smith’s iron play came to the rescue.

He stroked a fourth shot to four feet, leaving him with a straightforward bogey putt to limit the damage.

Lahiri meanwhile, who had closed to within one of the lead after a birdie of his own on the 17th, then failed to chip in from 41 feet on the last to leave Smith alone at the top of the leaderboard and celebrating a $3.6 million payday.