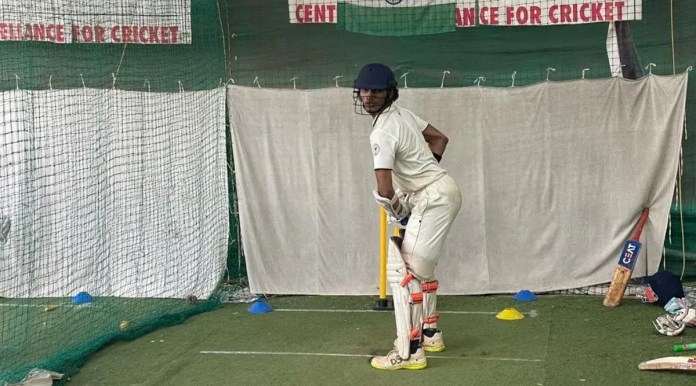 Siddharth Mohite Batting Marathon: Mumbai’s 19-year old batsman Siddharth Mohite is attempting to created a Guinness world record by batting in the nets non-stop for 72 hours. The batsman on Sunday night, has broken the previous record of 50 hours and is well on his way to reach the 72-hour mark with his batting marathon. Follow InsideSport.IN for more updates.

According to Indian Express, the batsman on Sunday night has broken the previous record for the longest individual batting session male set by Pune’s Virag Mare in 2015. Mare had batted for 50 hours four mins and 51 seconds to get his name in the record books. By breaking this record, Mohite is now well on course to complete his 72-hour mark.

Speaking to Indian Express about the World Record attempt, Jwala Singh, the coach of Siddharth Mohite said, “One day he came and said, ‘sir, I want to break this record of batting for 52 hours continuously in the nets. I had never heard about it before. He insisted again and I said I will give my facility in Thane where he can try this.”

After getting the green signal from his coach, Mohite dialled his friends in Pune and asked them to come to Thane with their bowling kit. They were told that he wanted to do something big. He also spoke to his cousin and friends who helped him set things up. There are witnesses to keep tab of Mohite’s batting for three days. These witnesses are working in four-hour shifts to record each ball Mohite faces. Witnesses also write down the number and duration of breaks taken. One man is tasked with recording his batting on video. Mohite is allowed to take a five-minute break every hour. He is having only protein foods and a few drinks so that his body gets the required energy to bat for so long.

By the time Mohite went past Mare’s mark, he had broken three bats. His forearm had swollen and a clot had formed at the base of his little finger. “The idea came randomly one day in my mind. Many said it won’t be possible but I’m happy to have managed it,” Mohite said during the break.

“I have the CCTV feed from the academy on my phone. My wife saw it late at night and said he is still batting. I never thought he could do this but now that he has achieved this, I’m happy. Batting for so many hours is no joke,” added Mohite’s coach.