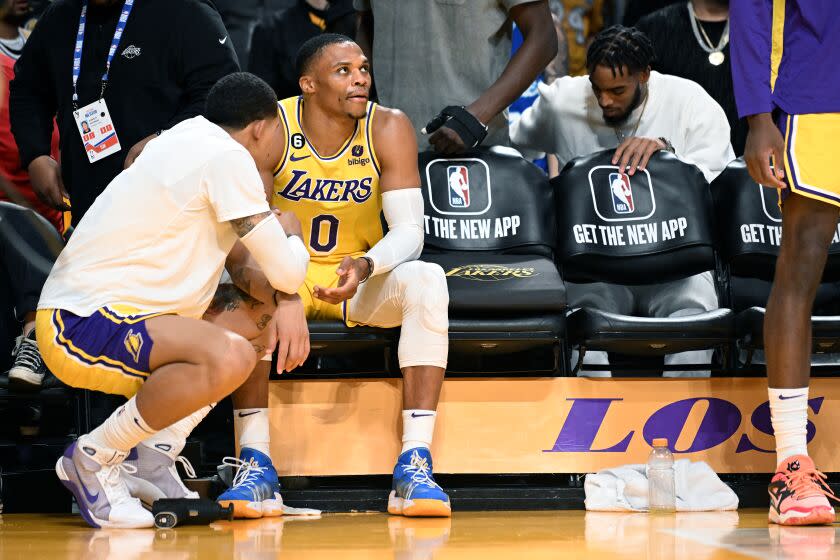 And each time the Lakers tossed up a three-ball Thursday night against the Clippers in their home opener at Crypto.com Arena, the likelihood of the ball settling into the net diminished.

So, two nights after the Lakers shot 10 for 40 (25%) from three-point range against Golden State, they had the nerve to shoot 45 more against the Clippers, making just nine, a shooting percentage of 20.

“I think there will be a game where we make multiple threes in a game. Multiple games. In multiple games,” said LeBron James, who was two-for-eight from three-point range. “But if we’re reliant on that every single game, then we’re in trouble.”

The Lakers are 19-for-85 from three-point range in two games. That is troublesome and not a recipe for winning.

“So, I’m not worried about that or thinking about that. It’s how hard we play, how aggressive we play, how determined we are to go out and compete every night,” James said. “And we got to defend. When we defend, we’re going to give ourselves a good chance to win. And that’s a good ingredient to have.”

Here are four takeaways from the Lakers’ 103-97 loss to the Clippers.

1. Three-pointers at the end of the game went nowhere.

They made None. Zero. Zilch.

Here is how the Lakers stacked up shooting three-pointers for the game:

Are opponents more than willing to let the Lakers shoot threes because they are so bad at shooting them?

“If they want to give us those shots, then we’ll accept it wholeheartedly,” coach Darvin Ham said. “I mean, that’s the way we want to play. We want to play fast, physical and free. And, again, we see these guys making shots in practice and shootaround. They’ve got to do it on the game floor. It’s as simple as that. Whether a team is giving us shots or whatnot, it is what it is.

“But we like the shots we’re getting. Once we start making them, we’ll see if those shots are still available due to our running habits and our screening habits. Definitely you’d like to see the ball go in more. But again, you just have to trust the process and continue to work at it and get reps up and eventually the ball will go in the hole.”

The Lakers didn’t get nearly enough production from their guards.

Westbrook (zero for 11 from the field) finished with two points, Beverley (one of seven) had five points and Nunn (zero of seven) didn’t score.

“Well, I trust in those guys — as in Kendrick, Russ and Pat Bev’s professionalism, their work ethic, their individual pride in themselves in terms of wanting to have the best performance possible night in and night out,” Ham said. “So, you end up having nights like these sometimes throughout the course of an 82-game season. But I trust them. They’ll bounce back. They’ll play better next time. And we’ll go back and look at the film and see how we can help them all.”

3. Walker was a bright spot.

For the second consecutive game Walker was in the starting lineup.

He scored a team-high 26 points, 12 in the fourth quarter. He also had three rebounds, three assists and two steals.

Walker attacked the basket in his 36 minutes and 34 seconds on the court.

“I’m not here to score the most points,” he said. “I’m just here to bring energy, be a defender, be more of an athletic guard. Just trying to get down the hill, look for my teammates, try to get AD some easy buckets. Just playing the right way and playing hard.”

Playing against a traditional center like the Clippers’ 7-foot Ivica Zubac, the Lakers’ small-ball lineup had problems. Zubac had 17 rebounds and five blocked shots in more than 35 minutes of playing time. Paul George contributed 10 boards.

James led the Lakers in rebounding with 10 while Davis had eight. No other Laker had more than four.