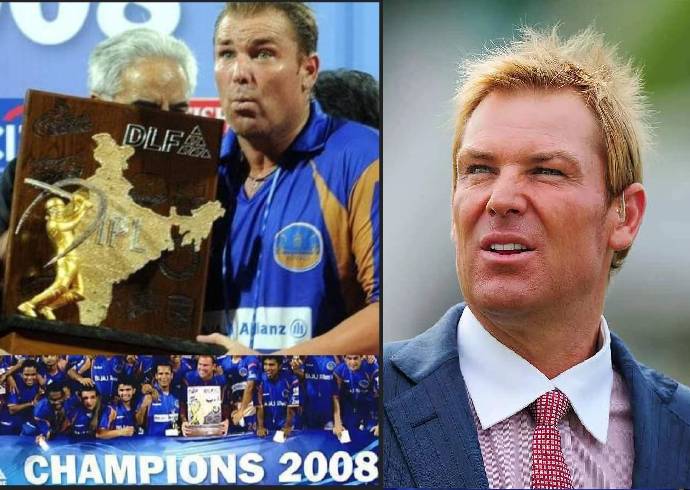 Now his friend Tom Hall has revealed that all friends had a quite dinner. Post the dinner Warne brought him some presents & during conversation proudly started telling his FAIRY TALE IPL Victory story.

“As we went through the shirts and jumpers, more stories came out about the first IPL season and how he had inherited a team which had several unknown players in it.

They lost their opening game, but Shane told (Rajasthan Royals owner) Manoj Badale, ‘Don’t worry mate, we’ll be OK’. They promptly won the rest of their games and the inaugural IPL title.”

Warne Friend Reveals, ‘he had IPL on mind before death’: Tom Hall was part of the group staying at the Samujan resort on the island of Koh Samui when Warne tragically suffered a suspected heart attack.

Hall penned an article for The Sporting News & shared his last few hours with Shane Warne before his death.

In the article, Hall has revealed that Warne was proud of his IPL achievement & especially his triumph with Royals.

“Shane had been working with me at The Sporting News for the past year or so and he presented me with his jumper from the 2005 Ashes Test, his 2008 IPL shirt and a one-day international shirt and cap to place in the TSN offices in Australia and the UK. Amazing gifts I knew the teams would love and cherish.

“After joking around with the various cricket gear and Rob and a few others getting pictures with Shane, we decide on a quick bite to eat,” Hall wrote.

“The conversation ran from poker, to a planned trip to Tulum in Mexico, the upcoming IPL season and the usual assortment of golfing stories.

After the tragic news of Warne’s death, the Royals shared a heartfelt note to pay tribute to the ‘King of Spin’.

Shane Warne. The name stands for magic. Our first Royal; a man who made us believe that impossible is just a myth. A leader who walked the walk, talked the talk, and turned underdogs into champions. A mentor who turned everything he touched into gold,” the note from the Royals began.

“We don’t have the words to express what we truly feel at the moment, but what we know is that the world is poorer today, as it will now exist without his smile, his brilliance, and his attitude to live life to its fullest. We’re completely heartbroken, as are millions of cricket fans all around the world.

Warne’s death came merely hours after another former Australian cricket great, wicket-keeper Rod Marsh died on Friday at the age of 74. Warne’s last post on Twitter, 12 hours before his death was reported, was a tribute to Marsh.