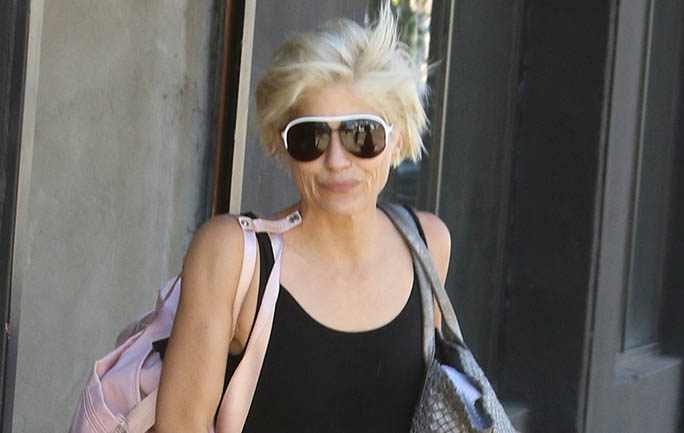 Selma Blair made a fashionable departure from her “Dancing with the Stars” rehearsal in Los Angeles on Thursday. Blair had her English fox red Labrador Scout by her side as she exited the building.

The “Legally Blonde” star wore a black body suit. The closet staple had a scooped neckline with thin supportive straps. She tucked the lightweight separate into a brown fringe skirt, which had a high-low hemline and extreme thigh-high side slits. Blair accessorized with black oversized aviator shades and carried a pink duffle bag and silver handbag on her shoulder.

When it came down to shoes, the “Cruel Intentions” actress completed her look with a pair of black ballet flats. The silhouette had a thin strap on the instep and high a counter for extra support.

Ballet flats as a women’s shoe style emerged in the 1950s, and soon caught on as a pleasant medium between heels and sneakers. The feminine-meets-functional shoes are well and truly back in business and better than ever. The style was especially popular in the noughties, though it has stayed in fashion over the decades for its versatility of wear.

In addition to the reality show competition, Blair recently celebrated landing a new Gap campaign as part of the brand’s Icons campaign, where she starred alongside Labrinth, Cameron Russell, Lucky Blue Smith, and Toni Breidinger. For Blair, this was a full circle moment, as she worked at a Gap store on the Upper East Side in New York when she first moved to New York to pursue acting as she revealed in her book “Mean Baby.”

Slip into a pair of flats this season.