The NBA has revealed the referee assignments for the pivotal Game 7 of the Eastern Conference Finals between the Boston Celtics and Miami Heat at FTX Arena on Sunday night.

Scott Foster, James Capers and David Guthrie are the officials. James Williams is the alternate.

Forsberg: If it was easy, it wouldn’t be the Celtics

Foster, nicknamed “The Extender”, is the most well-known ref in this group and one of the most recognizable ones across the league. He has 28 years of experience.

The Celtics have a 16-19 all-time playoff record in games that Foster has been one of the officials, a 10-13 record with Capers and a 4-5 record with Guthrie.

NBA odds: Celtics are favorites on the road vs. Heat in Game 7

The C’s won Game 4 against the Heat, as well as Game 4 against the Brooklyn Nets in the first round, when Foster was among the referees. Foster also was one of the officials when the Celtics defeated the Toronto Raptors in Game 7 of the second round inside the 2020 Florida bubble.

Capers was one of the referees when the Celtics beat the Milwaukee Bucks in Game 7 of the second round a few weeks ago.

See also  Clippers' clutch late-game play has them back at .500

Tipoff for Game 7 in Miami is scheduled for 8:30 p.m. ET. The winner advances to the 2022 NBA Finals and will play the Western Conference champion Golden State Warriors. 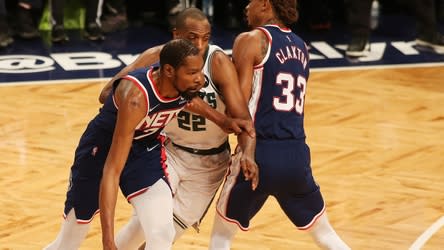 James Harden talks scoreless second half in Game 6 vs. Heat, his future with Sixers

Jalen Green working out in Houston, focused on next step for Rockets