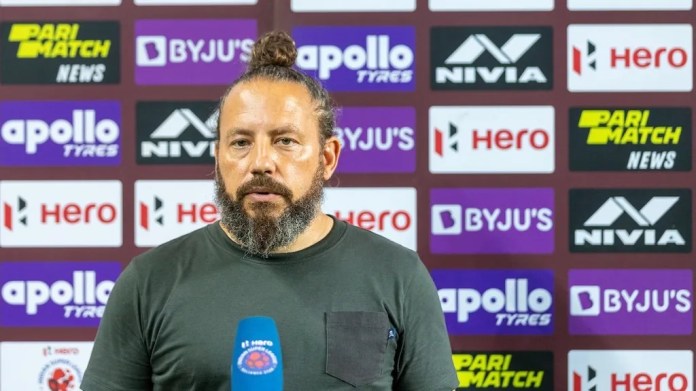 ISL Season 8: Just like his counterpart, SC East Bengal head coach Mario Rivera was also disappointed as his team once again failed to secure the elusive win against NorthEast United in the Indian Super League. Follow all the ISL 2021-22 LIVE Updates only on InsideSport.IN

The Red and Golds showed great heart to come back from a goal down. Marco Sahanek scored the opener for the Highlanders. But soon SC East Bengal received a penalty after Patrick Flottmann’s foul on Fran Sota. Antonio Perosevic scored his fourth goal of the season as he converted the penalty to restore parity and bag a point from the match.

“Yes, we should have won the match. We took many shots, almost 18, we made everything to create a chance and to have the chance. But we couldn’t score one more goal,” Rivera said at the post-match press conference.

Also Read: ISL Season 8: We tried our best but it was not up to the mark, says NorthEast United’s Khalid Jamil after draw against SC East Bengal

The Spaniard coach shared how Dutch midfielder Darren Sidoel got injured during the warm-up and missed the game. Speaking on the injury and his status, Rivera revealed, “He injured his ankle in the warm-up. We don’t know, we have to wait for the test tomorrow to check him. After the test tomorrow we can only tell if he can play in the next match or not.”

SC East Bengal made an acquisition as they brought in Nepal international defender Ananta Tamang. When asked about his availability and whether he will play the last match of not, Rivera added, “Let’s see, he only made it to the one training session the day before the match. We will see tomorrow if he’s fit or not fit after the quarantine. If he’s fit we will use him.”

Rivera also delivered a similar message like NorthEast United’s head coach to the SC East Bengal fans. He is sure that the fans can see the effort they are putting in winning the matches. “Yeah for the fans, we have to tell them that we tried and fought till the end. They can see that in our matches and we will try to win the next match and dedicate that win for them,” Rivera concluded.