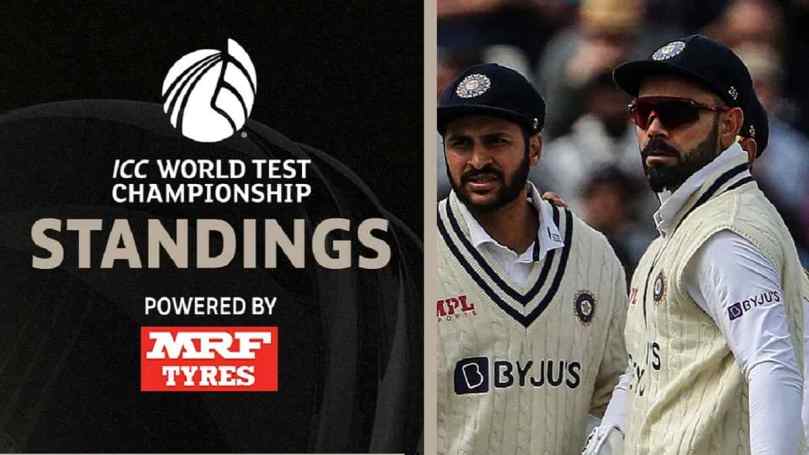 ICC World Test Championship – What India has to do to enter WTC FINALS? South Africa’s loss to England in the third Test at The Oval has left the race for next year’s World Test Championship final wide open. India especially has boosted their chances as they have jumped to NO. 4th in WTC Points table. A total of six teams are in contention to reach the final. Check what India requires to make it to the WTC Finals? Follow India in WTC RACE & Check Latest ICC WTC Points Table with InsideSport.IN

Heading into the final stages of the cycle, here’s how your team is positioned.

England’s win forced South Africa to drop crucial PCT (win percentage) in the lead-up to the final of the ICC World TEST Championship 2021-23 cycle. The Proteas, however, remain second with a PCT of 60, ahead of Sri Lanka (53.33) and India (52.08).

Australia leads the WTC points table with six wins in 10 matches which accounts to a win percentage of 70.

While Australia are seemingly in pole position to qualify for their first World Test Championship final, they will likely need to produce some positive results during next year’s tour of India.

Facing Rohit Sharma’s side away from home for four Tests in a place they haven’t won at since 2004, the Australians will likely need to avoid defeat to ensure they reach the WTC decider.

Good results during Australia’s home summer against West Indies and South Africa will have Pat Cummins’ side well placed, but neither touring team will be a pushover.

A 2-1 series loss to England away from home saw the Proteas lose top spot on the World Test Championship standings, although they still remain in a strong position to reach next year’s final.

Their away series against Australia will be crucial to the fortunes of both sides, while South Africa host West Indies for two Tests next year that could determine the final places.

While Sri Lanka are seemingly well-placed to reach the World Test Championship final, they will require everything to go their way if they are to qualify for the decider.

Just one series remains for Sri Lanka – a two-Test trip to New Zealand – where they have won just twice in 19 attempts.

Maximum points in New Zealand would take them to 61.1%, meaning they’ll need help from the unfancied sides further down the table just to finish in the top two.

Rohit Sharma’s side travel to Bangladesh for two Test matches later this year and a positive result during that series will leave the upcoming battle for the Border-Gavaskar Trophy as one of the biggest for many years.

India do have an excellent recent record at home against Australia and will be confident of doing enough to win that series and qualify for a second consecutive World Test Championship final.

And there is still some chance India could meet arch-rival Pakistan in the World Test Championship final should both teams have everything go their way over the coming months.

While Pakistan are languishing in fifth place on the current standings, they do have the luxury of playing all their remaining five Test matches on home soil.

If they can win all those five matches they will rise to 69.05%, which may still prove enough to qualify for a first World Test Championship final.

However, Babar Azam’s side cannot afford too many slip-ups, with each Test they don’t win to be detrimental to their chances of finishing inside the top two places on the standings.

The West Indies can finish on 65.38%, though would have to win all four matches in tough away conditions to seal an unlikely place in the WTC23 final.

Distancing themselves from the bottom of the table with a series win over England and a clean sweep against Bangladesh, there have been positive signs in the campaign for skipper Kraigg Brathwaite, even if it feels like a solo charge with the bat.

Brathwaite’s 752 runs at 50.13 is by far and away the most by a West Indies player in the cycle, though the bowling load has been carried by several members of the group.

England are one of the form teams of the World Test Championship, but unfortunately, it’s a case of too little too late for Brendon McCullum’s side.

At one stage stuck at the bottom of the table, England’s hopes of lifting the mace were arguably dashed as early as the unsuccessful Ashes series at the start of this year.

Back-to-back series triumphs over New Zealand and South Africa have shown what England are capable of, but they will have to wait for the next period to try and qualify for the World Test Championship final.

This doesn’t mean the backend of their campaign has no effect on WTC23 proceedings, however.

They could put a massive dent in Pakistan’s hopes by defeating Babar Azam’s side in three Tests away from home later this year.

It’s been a death by a thousand cuts for the 2021 champions, who fell to Bangladesh at home, saw Ross Taylor bow out of the international game, and had their captain Kane Williamson sidelined with elbow trouble.

The Black Caps can only finish with the best percentage of 48.72%, well short of what’s needed to feature in next year’s final.

Bangladesh are a leading light in One Day International cricket, though the longest format has not been the Tigers’ forte, with shaky batting preventing any World Test Championship push.

The side have not won a Test match at home in the competition thus far, though did surprise New Zealand in Mount Maunganui.

Bangladesh will be looking to surprise when they host India for two Tests later this year.