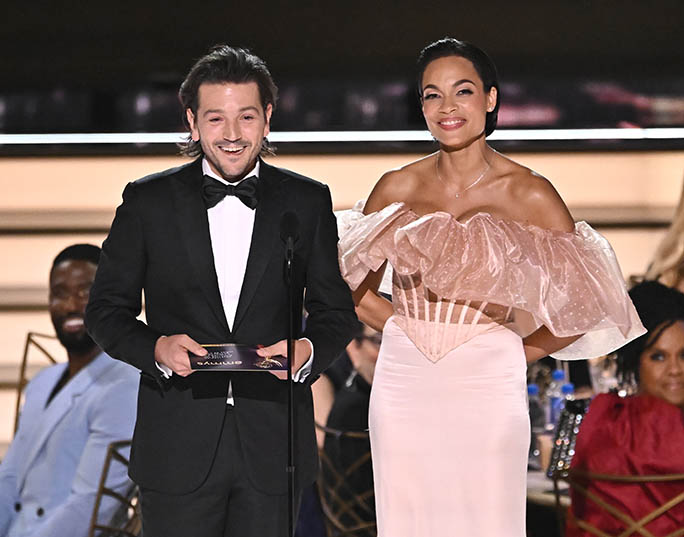 You can always count on Rosario Dawson to make a stunning style statement. The actress did that just that while attending the 2022 Emmy Awards held at Microsoft Theater in Los Angeles tonight.

Dawson looked gorgeous as she joined Diego Luna onstage to present Mike White with the Outstanding Directing Award for the HBO Max series “The White Lotus.”

Styled by Jason Rembert, Dawson appeared alongside Luna in an off-the-shoulder light-pink dress by Christian Siriano. The top of the garment had a dramatic ruffled neckline and included a fitted corseted bodice. While the bottom half of the dress featured a skintight satin skirt and subtle train.

The “Men in Black” star wore her dark tresses slicked back and pinned straight. For makeup, she went with a sultry smokey eye and glossy nude lip. To let her look do all of the talking, Dawson simply accessorized with small diamond earrings.

Unfortunately, the length of her gown did not allow for a peak at her footwear choice but it would be no surprise if she completed her look with sharp pointed-toe pumps or a strappy silhouette. For red carpet events, the Studio 189 co-founder tends to gravitate towards styles that align with her bold and eclectic taste.