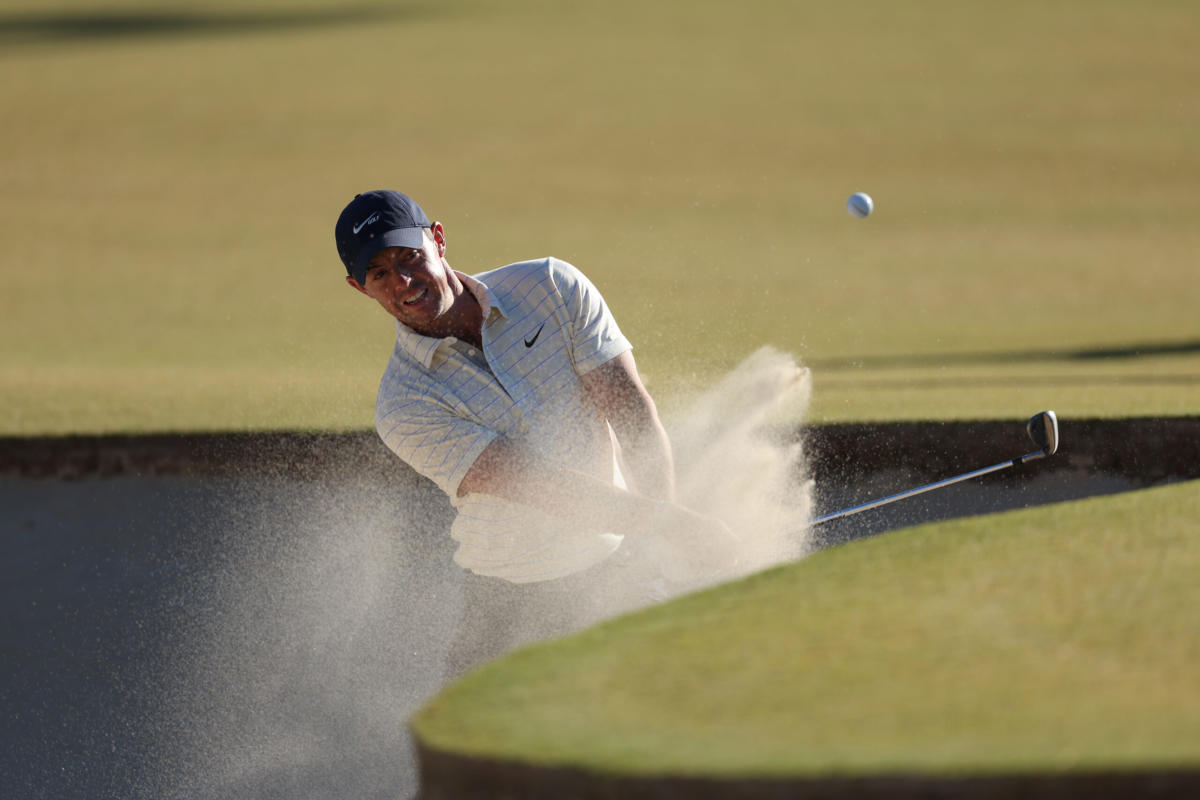 The best field of the 2022-23 PGA Tour season (to this point) is certainly living up to expectations, but there are plenty of chasers looking to crash the party of big names.

Moving day was Saturday at the 2022 CJ Cup in South Carolina at Congaree Golf Club, and it should be no surprise to see Rory McIlroy sitting at the top of the leaderboard heading to Sunday. He’s the defending CJ Cup winner, though the event was at Shadow Creek in Las Vegas last year. McIlroy has been arguably the best golfer in the world the past few weeks, and a win would move him back into the top spot of the Official World Golf Ranking.

However, with 18 holes to play, there’s plenty left up for grabs.

Here’s a breakdown of the third round of the CJ Cup.

Guess what? Rory is at the top (again)

Rory McIlroy putts on the first green during the third round of THE CJ CUP in South Carolina golf tournament. (Photo: David Yeazell/USA TODAY Sports)

It has become no surprise to see Rory McIlroy near the top of the leaderboard in recent weeks.

Whether it’s major championships, FedEx Cup Playoffs, DP World Tour or PGA Tour events, McIlroy is playing some of the best golf in the world, and he again has positioned himself for another win in his first start on Tour in the 2022-23 season.

McIlroy carded his second straight 4-under 67 and sits in the lead at 13-under 200. He played the par 5s in 5 under on moving day and had two eagles, three birdies and three bogeys during his round.

Yet it was enough to surpass 36-hole leaders Jon Rahm and Kurt Kitayama, who sit one shot behind at 12 under heading to Sunday. K.H. Lee, who tied the low round of the day Saturday with a 5-under 66, is also at 12 under.

Kurt Kitayama walks to the 12th tee box during the third round of THE CJ CUP in South Carolina golf tournament. (Photo: David Yeazell/USA TODAY Sports)

It has been a busy past three weeks for Kitayama.

Two weeks ago, he missed the cut at the Shriners Children’s Open in Las Vegas. He then flew to Japan and made the cut, finishing T-29. Now, the 29-year-old is within striking distance of his first Tour victory with 18 holes to play.

As mentioned, Kitayama co-led after the second round but wasn’t able to get much doing during a third-round 1-under 70. He finished second twice last year, once at the Genesis Scottish Open and a T-2 at the Mexico Open at Vidanta, when he finished runner-up to Rahm.

However, come Sunday, Kitayama will see whether he can play spoiler.

Jon Rahm after playing on the first green during the third round of The CJ Cup in South Carolina. (Photo: David Yeazell/USA TODAY Sports)

See also  Tears, cigarettes and seagulls: The top talking points after the second day at the 150th Open

It was going to be hard for Rahm to follow up what he did Friday after shooting 62, but a birdie on the par-4 17th, which is playing as the most difficult hole of the tournament, was enough to move him within a shot of the lead on moving day.

Rahm’s birdie was only the third of the day at the difficult hole, and he did it with an up-and-down from 190 yards out of a fairway bunker. He made the 21-foot, 2-inch putt and gave a subtle fist pump.

Rahm won his last start in Spain on the DP World Tour, and he’s in position to win on the PGA Tour for the first time since April in Mexico. That’s in large part to his finish in the third round, which included three birdies during his final seven holes to get back into contention. He was 2 over after 11 holes with three bogeys before his strong finish.

Wyndham Clark watches his shot from the 12th tee during the first round of the CJ Cup in South Carolina. (Photo: David Yeazell/USA TODAY Sports)

Wyndham Clark only needed one shot to get his ball in the hole on the par-3 10th.

From 181 yards, he holed his shot for an ace. It was big for his score, too, as Clark turned in 2-over 38, so the hole-in-one got him back to even for his round. He followed it up with a birdie on the 11th hole.

A look at the bottom of the leaderboard

Scottie Scheffler putts on the 17th green during the first round of the CJ Cup in South Carolina. (Photo: David Yeazell/USA TODAY Sports)

The CJ Cup has 15 of the world’s top 20 players in the field, but not everyone is near the top of the leaderboard.

World No. 1 Scottie Scheffler, who went through a putter switch earlier this week, shot 3 over on moving day and is T-47 at even par. Also at even par is Rickie Fowler, who almost broke through last week at the Zozo Championship, as well as Justin Thomas and Hideki Matsuyama.

A bit lower, Jordan Spieth, who went 5-0-0 at the Presidents Cup last month, is 3 over and T-63. Sahith Theegala, one of two rookies to qualify for the Tour Championship in August, is at 9 over and T-74.