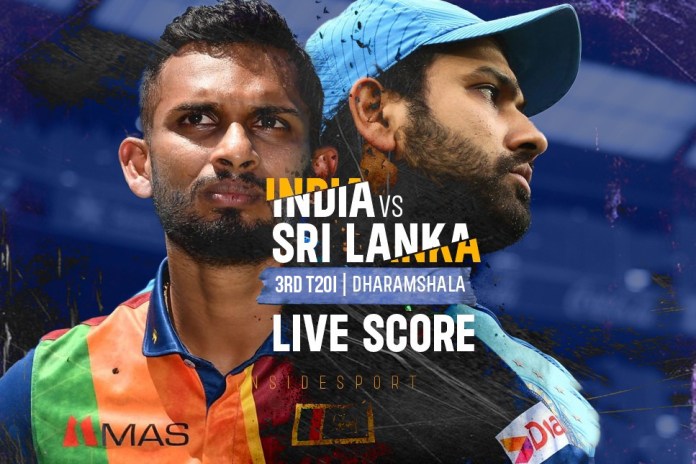 IND vs SL LIVE Score, 3rd T20: Rohit Sharma and Co will aim for yet another series whitewash when they take on Sri Lanka in the third and final T20I on Sunday. Having already sealed the series 2-0, India will look to rotate their options having played on Saturday night at Dharamshala. With Rohit Sharma hinting at big changes for the 3rd T20 in Dharamshala ahead of the Test series, he is likely to rest. Jasprit Bumrah who was rested for the West Indies series could lead in his absence. Follow Insidesport.in for all IND vs SL LIVE updates.

Shreyas Iyer (74) and Ravindra Jadeja (45) powered India to a 7-wicket win over Sri Lanka in the 2nd T20 at Dharamshala to seal the series 2-0. With the win, Rohit Sharma-led side has now won 11th consecutive T20Is to equal Afghanistan’s record. India are now just a win away from equalling Afghanistan’s 12 consecutive win record. It was also India’s 7th consecutive home series win T20Is.

Chasing 184, India got off to a bad start as the side lost skipper Rohit Sharma in the first over. Dushmantha Chameera removed Rohit as the batter edged the ball onto the stumps.
Ishan Kishan and Shreyas Iyer stitched a 35-run stand but Lahiru Kumara removed the batter in the sixth over.

With the series in the bag, Rohit Sharma and Co are likely to bring in a host of changes with less than 24 hours rest between the two matches.

“We’ll sit down tomorrow, see what we can do on any team changes. We have used 27 players so far, there could be more. When you win the series, there are guys who haven’t had the opportunities. Some of the guys will have to play Tests, we’ll have to look after everyone. It’s the sign of the times we’re in, it’s fine to look after physically, but it’s the mental thing that’s important as well,” Rohit Sharma said after the match.

Since making a recovery from injury, Rohit Sharma has played eight matches in a 20-day span. From March 4, India will play two Test matches and that could take a toll on his body. To keep himself fresh, he could hand over the captaincy reins to Jasprit Bumrah for the match.

However, Ishan Kishan could also miss out on the match. Ishan was hit by a Lahiru Kumara bouncer in the 2nd T20 and looked in discomfort. Soon after being hit on the helmet, he was dismissed and if he shows signs of concussion, he will be rested. Sanju Samson will don the gloves. If he is rested, Rohit may have to play as India lack batsmen in the team with Ruturaj Gaikwad ruled out with injury.

As for Sri Lanka, the Lankans will hope to bounce back and clinch a consolation win in their final limited-overs game of the tour. The visitors had sealed a win in the final game of their series against Australia Down Under and will hope to do the same on Sunday.