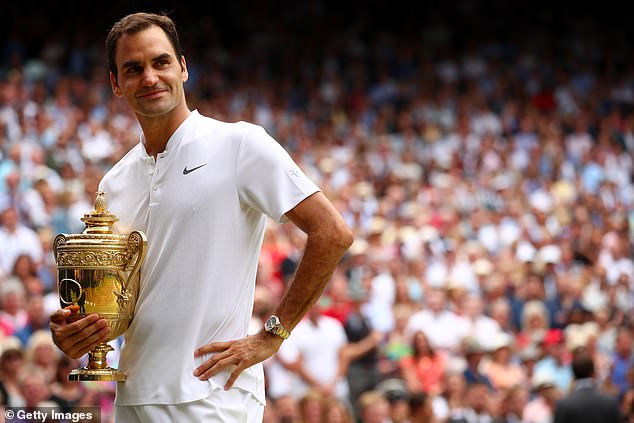 Statistically, Roger Federer does not retire as one of the two greatest tennis players to have graced the game. If Margaret Court is better than Serena Williams, then Rafa Nadal and Novak Djokovic are an improvement on Federer.

He hasn’t won a Grand Slam since the 2018 Australian Open, hasn’t reached the last four since 2020. His last set of Grand Slam tennis ended in a 6-0 reverse at Wimbledon in 2021.

Yet we know all of this is illusionary. With Federer’s retirement, tennis has lost its greatest artist, a protagonist unlike any other, a man who elevated sport until it became almost highbrow.

At his best, Federer in full flow felt like his matches should be reviewed on the culture pages, away from the sweat and effort of the sporting arena. Comically, the man himself never seemed to break into anything as unseemly as a sweat. His opponents would toil, yet he remained sublimely aloof.

Not in reality, of course. Federer’s true art was making his dedication and determination — and a very mean streak of ruthlessness — look like effortless flow. He shared epic, almost endless, gladiatorial battles against the best of the best in an era competitive and draining like never before, and all while apparently unflappable.

He announced himself on Centre Court by toppling the master across five sets. In 2001, Federer, 19, defeated Pete Sampras in the fourth round on what is traditionally known as Manic Monday.

Sampras would never win Wimbledon again, his era of domination stopped at seven titles. In 2017, Federer would make it eight with a straight sets win over Marin Cilic, clinching the record. He would beat the Croatian again at the Australian Open the next year, the 20th and last of his singles titles. 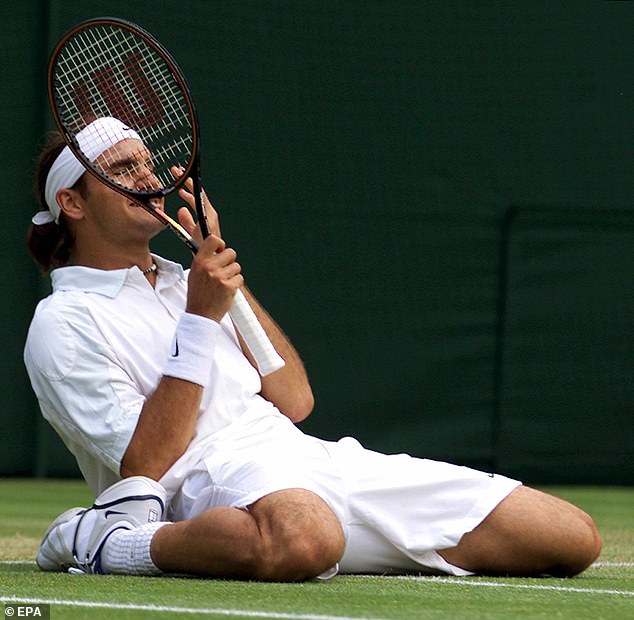 He announced himself in 2001, when Federer, 19, defeated Pete Sampras at Wimbledon

‘The champions’ champion,’ announced Billie Jean King on Thursday, perhaps grasping for superlatives after exhausting ‘greatest of all time’ for Serena Williams in New York little more than a week ago. She described him as having the most complete game of his generation and nobody denied it.

However you wanted it played, Federer could play it. He could go on the attack or defend for his life. He was elegant, almost delicate, then crushingly powerful.

He was quick on his feet, with another few metres in his brain. He was tactically astute and pounced on every chance. His forehand was arguably the greatest the game has seen.

And when Nadal made his lone slip, in the 2009 French Open, it was Federer who took advantage, beating the Spaniard’s conqueror, Robin Soderling, in the final. Federer had lost the previous three finals at Roland Garros to the master of clay, but it was this that gave him his career slam. The other Slams, at his peak, he dominated. 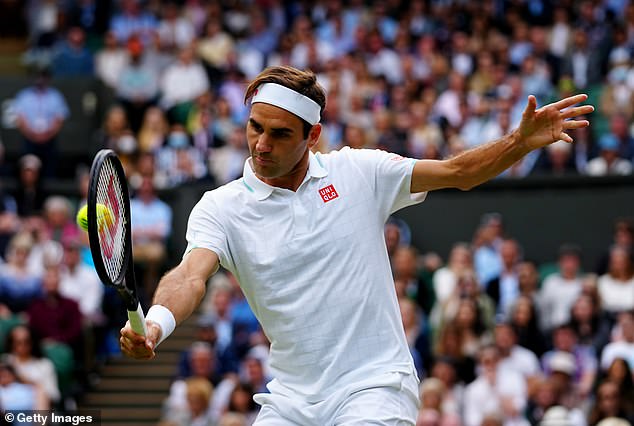 Since then, Federer would go on to elevated the sport beyond the realms of athleticism 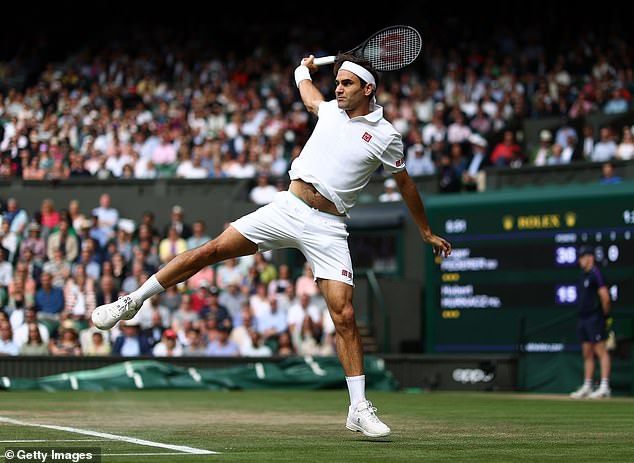 He’d go on the attack or defend for his life. He was elegant, delicate, then crushingly powerful

In the four years between 2004 and 2007, he won every Wimbledon, every US Open and three out of four Australian Opens. He won Wimbledon six out of seven years between 2003 and 2009, his early style owing more than a little to that of ‘Pistol Pete’ Sampras, not least his fabulous serve.

Like Sampras, he could be pragmatic when necessary but that is not how fans will remember him. To them, Federer could do no wrong. He inspired loyalty and fervour, the way nations do, often turning a partisan crowd against one of their own, such was his popularity.

Watching him was a pleasure, a rare joy. He was on a par with Lionel Messi, with Sachin Tendulkar, in elevating his sport beyond the realms of athleticism. The same words recur in tributes paid by contemporaries — elegance, grace, poise, beauty, not language typically associated with sport. 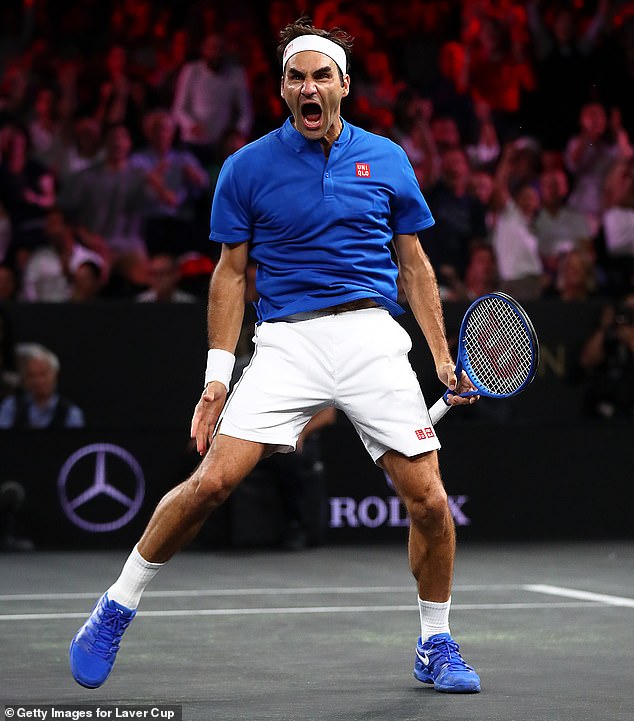 Yet it was those attributes that set Federer apart. And it still takes a physical toll even if at times Federer played as if he was gliding.

In 24 years, across 1,526 matches, Federer never gave in, never retired through injury. But by the end, at 41, he admitted his body was sending him painful messages. He had missed the last five Slams. It was plain the time had come.

When she issued her retirement notice, Serena Williams implied that had she been born male, she could have gone on and on. But that isn’t true. Federer played through the birth of two sets of twins — and Williams has a point there — but 41 in elite sport is 41, no matter your gender.

Federer knows it is time to go gracefully. In true, crowd-pleasing style he will afford his fans one last look, at the Laver Cup in London next week. 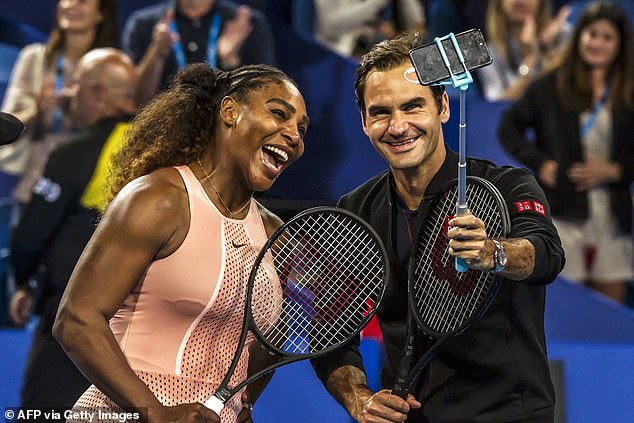 And then, like Williams, he could be anything in tennis. What a loss to the sport, those two. And in the coming days there will be much said about his genius, his artistry, about the most beautiful game.

He reached 10 consecutive Grand Slam finals, won 1,251 times on the ATP tour, spent 237 consecutive weeks at No 1, was the oldest player to be ranked No 1, won 65 consecutive matches on grass, won 24 consecutive ATP finals and won 369 Grand Slam matches.

And the greatest achievement of all? He made it all look like the flourish of a brush on canvas. What a player he was, and what an artist.