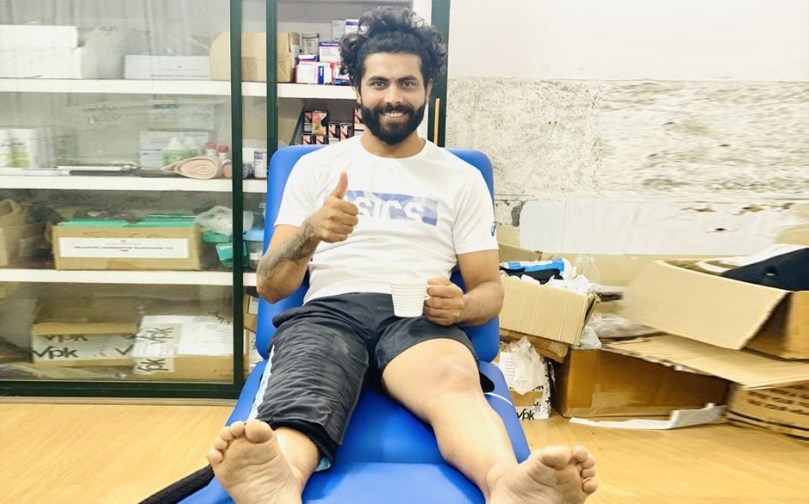 Ravindra Jadeja Injury: India’s star spin all-rounder Ravindra Jadeja has hit the restart button as he continues his recovery following knee surgery. Jadeja suffered a knee injury during the Asia Cup while he was forced to balance on a ski board. He was not only ruled out of Asia Cup 2022 but also ICC T20 World Cup 2022. Now, his return date on the field will be ascertained only when he reports to the National Cricket Academy (NCA) in October to begin his rehabilitation. Follow Inside Sport.IN for LIVE updates about Team India and IND vs AUS T20 series

In a social media post on Tuesday, Ravindra Jadeja shared a new photo following his surgery. Jadeja posted an image in which he could be seen donning a bright smile and with his right thumb up and in his left hand, he is holding a cup.

Jadeja is expected to report to the NCA next month, as per sources. The date of this visit is not yet finalised. But it is expected from him to begin his rehab at the National Cricket Academy (NCA) in October.

Jadeja underwent knee surgery two weeks back and is in the recovery phase. He keeps posting messages on social media to make sure his fans are updated on his progress. Jadeja had injured his right knee and was ruled out of the 2022 Asia Cup after playing the first two games in the continental event.

India had a day off prior to their Super 4 match against Pakistan at the Asia Cup 2022. At the hotel in Dubai, the team management decided to conduct a team activity. As part of a training exercise on the water, Jadeja had to maintain his balance while using a ski-board. The objective was to be able to develop better balance while having fun.

However, Jadeja suffered a terrible setback. The truth is that Ravindra Jadeja was already having knee trouble. He missed three T20Is against the West Indies due to knee problems. However, it was the team event that put an end to his World Cup hopes.

Ravindra Jadeja was flown back to Mumbai, where Dr. Dinshaw Pardiwala, an orthopaedic surgeon, performed a complicated knee operation on him. Jadeja has been disqualified from the T20 World Cup due to the prolonged recovery period.