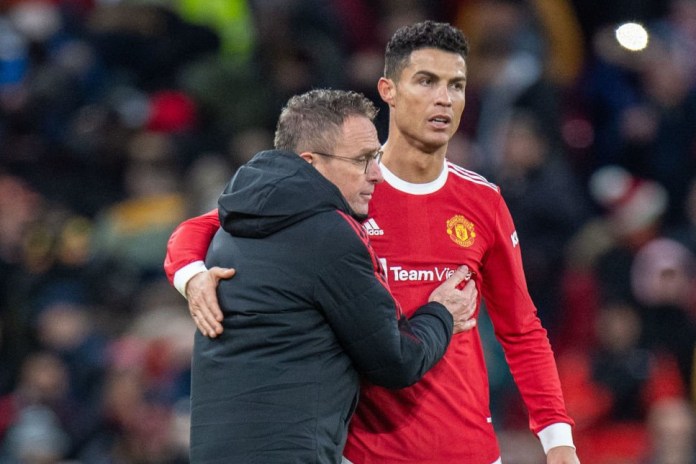 The Portugal forward returned from a hip injury to roll back the years with a hat-trick against Tottenham Hotspur in the Premier League on Saturday, laying claim to the all-time leading scorer record in professional football with 807 goals.

With the last-16 tie at home to Atletico level at 1-1 after the first leg in Madrid, Rangnick said he had no concerns that Ronaldo, 37, might struggle after his exertions against Spurs.

“His overall performance was good, if not very good, and this is what we hope to see from him again tomorrow night,” the interim manager told a news conference on Monday.

“I’m not worried that he’s not been able to recover. He’s always been a person that looks after himself and his body. He knows what to do.

“If he can score another three goals, we will see. It’s not easy to score three goals against this team at all.”

United winger Anthony Elanga netted in the 80th minute to cancel out an early goal by Atletico’s Joao Felix in the first leg and Rangnick said his team needed to show better focus at Old Trafford so they did not have to chase the game again.

“We saw in the first half in Madrid what we shouldn’t do, how we shouldn’t play, and this was a big topic for us yesterday and today when we spoke pre-match about tomorrow’s game,” he added.

“We have a fantastic opportunity to be in the top eight teams of Europe and this is exactly what we’re trying to achieve.

“It’s very important (not to concede first). Even more so against a team like Atletico, who don’t mind the other team having the ball.

“In their last four or five games, they had less than 50% possession. We are aware of that, we want to try not to concede at all if possible, but it will be important to score the first goal ourselves.”