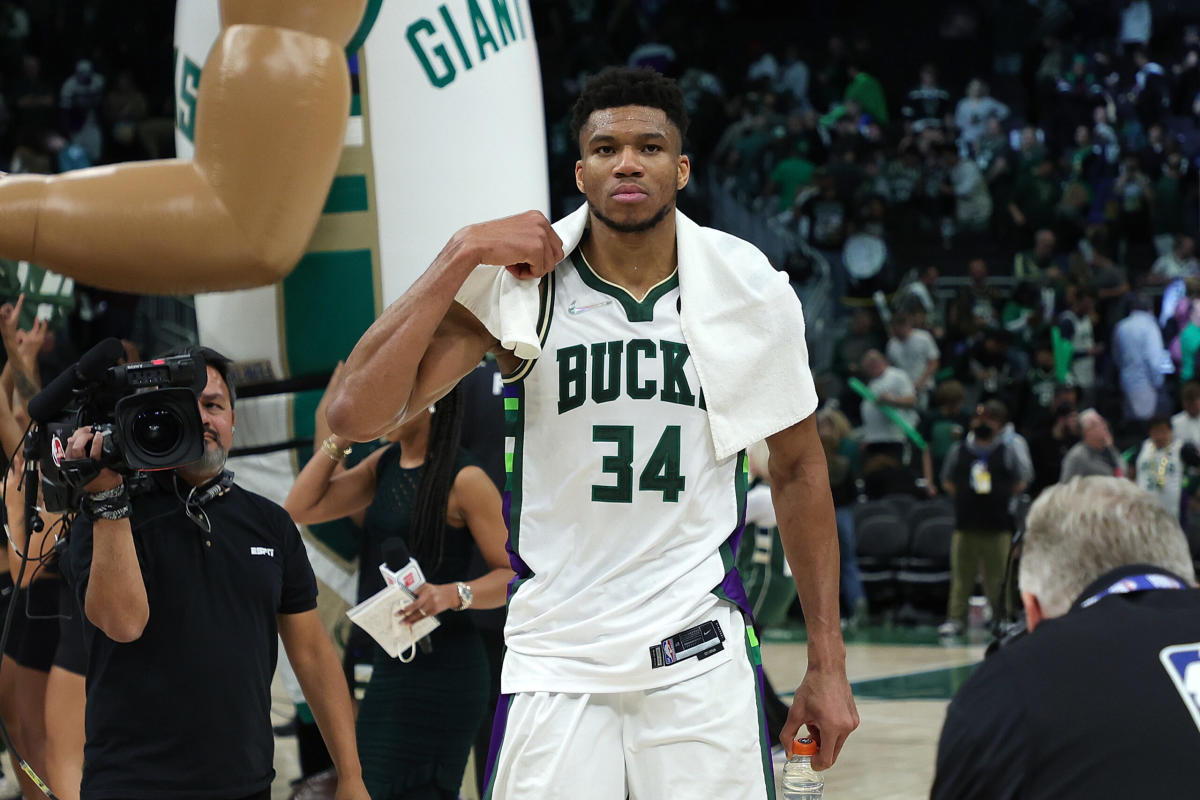 Milwaukee’s path to a championship in 2021 featured a lot of injury luck going their way, causing many to doubt the level of competition they had. While there may be truth to those arguments, Milwaukee was also perhaps a Khris Middleton injury away from going to the Conference Finals and perhaps even the Finals this most recent season. Injury luck goes both ways, but the Bucks are without a doubt legitimate contenders to win it all again as long as they’re healthy.

Below, check out our preview for the 2022-23 Bucks campaign.

*”Break glass for Giannis in case of emergency”… Antetokounmpo reasserted his status as the best basketball player in the world with his absolute domination in the playoffs. He put the team on his back when Middleton got hurt and nearly led the Bucks to a series win over the Celtics. Unfortunately, Boston’s strategy on Antetokounmpo wore him down towards the end of the series. But still, the Bucks have just as good a chance as everyone as long as he’s playing at an MVP level.

* Defensive foundation built for a deep playoff run… The Bucks had the best defensive rating in the 2022 playoffs as they put the clamps on their opponents. Their closing five led behind Antetokounmpo and Holiday when fully healthy has just enough versatility to combat switch-heavy teams. Lopez was a revelation with his elite rim protection post-back surgery, denying just about everything that approached the paint. Their defense is now battle-tested after winning a title and their valiant effort defending it.

* They have continuity on their side… The Bucks had a quieter offseason compared to teams like the Celtics, Sixers, and Cavaliers, and that’s mostly due to their lack of flexibility. Still, they have most players returning from last season. Their biggest loss is Nwora, who is a restricted free agent and could still return. With the exception of integrating Ingles once he’s healthy, the Bucks don’t need to worry about figuring out their rotations and will have all season for the roster to continue building upon their strengths.

* Age-related regression for their starters?… This Bucks core is not young by any means despite how young 27-year-old Antetokounmpo makes them look. Middleton, Holiday, and Lopez are all in their early-to-mid thirties and it’s unclear if they’ll remain at their current levels beyond this season. With such a low margin for error, any significant slippage from these guys could hurt their title odds.

* Not enough playmaking, especially in bench units… The Bucks had one of the league’s worst assist percentages last year and in the playoffs had to run just about everything through Holiday, Middleton, and Antetokounmpo. This is another thing they looked to address when they signed Ingles but it’s unclear how effective he will be when he returns. They may want to look for a trade or the buyout market for a player who can run pick and roll and shoot.

Milwaukee exhausted all its spending power this offseason after using the taxpayer mid-level exception on Ingles, and the Early Bird and Non-Bird exceptions to maximize salaries for Portis and Carter, respectively. They are now limited to adding players to veteran minimum deals for the rest of the season, with the exception of re-signing Nwora using his Early Bird rights.

The Bucks’ spending gives them one of the league’s highest luxury tax payments this season with $58.2 million in projected penalties. They still have an open roster spot that presumably could be for Nwora, and a minimum salary would add another $7 million in expenses. They seem more likely to increase spending via trades that improve their title odds rather than ones that save them money. Their best trade assets are limited to Beauchamp and their 2029 first-round pick.

One of the more pressing moves for the Bucks is possible extensions for Middleton and Lopez, both of whom can become unrestricted free agents in the 2023 offseason. The Bucks are set to enter the repeater tax next season which could impact negotiations, but they won’t have cap space if both players were to leave. Perhaps deals get done before the playoffs start assuming the Bucks continue to look like contenders.

1st in the Central division, 1st in the Eastern Conference (as voted by the HoopsHype staff)