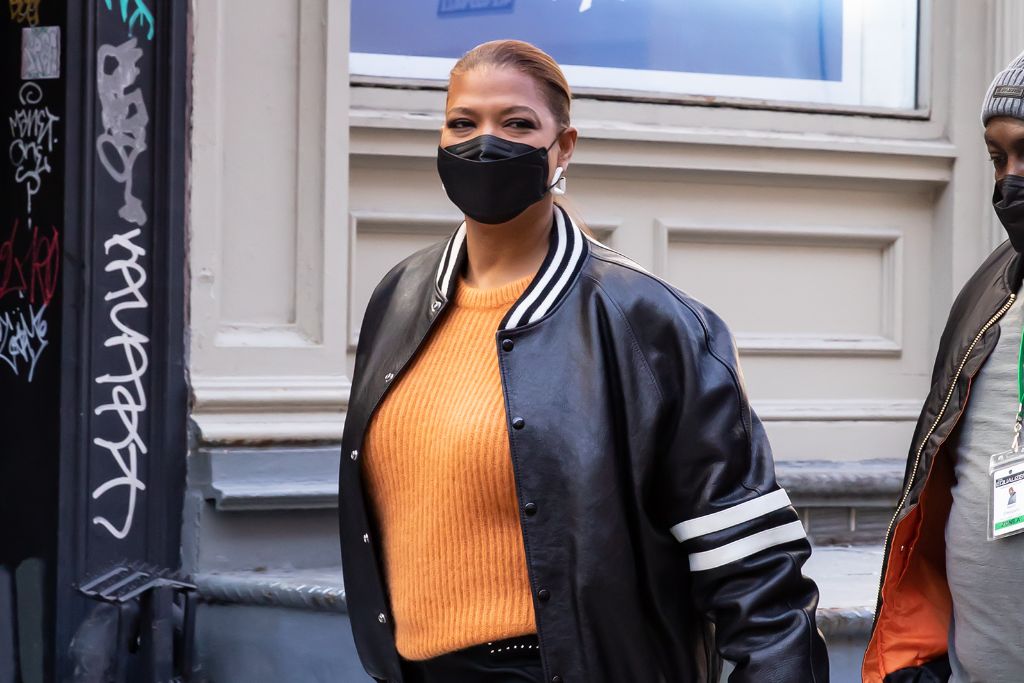 Queen Latifah pulled out a stylish streetwear outfit while in New York City on Monday. The world renowned rapper and actress was spotted arriving on the set of her CBS drama series, “The Equalizer.” Latifah plays Robin McCall in the television show that follows an enigmatic woman with a mysterious background who uses her extensive skills to help those with nowhere else to turn.

When it came to the outfit, the “Ladies First” hitmaker wore a leather bomber jacket. The outerwear prompted a varsity feel as it included solid snap buttons and double lines around the collar, on the cuffs and the hem.

Latifah added a pop of color to her street style ensemble with a vibrant orange sweater. To ground everything, the Grammy Award winner paired her top with sleek black pants that were streamlined with white dots on the side seam. She accessorized with a black face mask, silver hoop earrings and pulled her signature chestnut locs back into a low ponytail.

As for footwear, she took things up a notch with a unique and trendy footwear choice. The “Just Wright” star tied her look together with black and white sneakers. The silhouette included a two-tone design that was complete with leather uppers and cushioning for comfort. The kicks also featured an abstract design and a thick stacked midsole that peeks out from the heel.

When it comes to fashion, Latifah has a personal aesthetic unlike no other. Over the years, Latifah’s wardrobe has changed just as much as her career, transitioning from Adidas tracksuits to chic, evening gowns and tailored separates. The multi-hyphenate favors various footwear styles like pointed-toe pumps, metallic sandals and trendy sneakers.