Why did all 20 clubs get together?

It was the follow-up to a special meeting that 19 of the clubs had last Tuesday, which was to discuss their concerns about the Saudi-led £305m takeover of Newcastle and its implications for them. Newcastle were excluded from that meeting, which was extraordinary in itself. How often do 19 clubs convene to talk strategically about just one? The other clubs have worried about the potential for Newcastle’s uber-rich owners to strike commercial deals with companies in Saudi Arabia that could give them an advantage. And so the clubs proposed the draft of a rule change that would temporarily ban what are called related party transactions – in other words, arrangements with businesses with which club owners are associated. Monday’s meeting, which mainly involved participants dialling in via conferencing software, was to review and vote on the amendment.

What was Newcastle’s response?

They had been notified of the regulatory change, allowing them to run it through their lawyers. Representing Newcastle at the meeting was not Amanda Staveley, the director and minority stakeholder responsible for running the club on a day-to-day basis. It was the first shareholders’ get-together to which she was invited and there was surprise in some quarters that she declined to attend. Newcastle instead sent Lee Charnley, the managing director, and he made it clear that his club, acting on legal advice, believed the rule change to be anti-competitive and unlawful. The inference was that voting it through could leave those who did so open to legal redress.

See also  What have been the closest TV score abbreviations for two football teams? | Soccer

But the vote still happened?

Yes, it did. Eighteen clubs voted in favour of the new rule, with Newcastle against and Manchester City abstaining. A two-thirds majority is needed to effect change – which is 14 votes. City acted on legal advice that the vote was unlawful and would see the league acting as a cartel. The ban on related party transactions will be in force for the next month and applies to all 20 clubs.

What was the legal issue with the process?

On the face of it, the clubs can do whatever they like if they have the needed 14 votes but, of course, if it was something open to legal challenge, it would be problematic. What a rule cannot be is discriminatory; seeming as though it were designed to attack one club. Newcastle’s complaint could rest in this area. But the league may say that it has been looking into tighter financial controls and checks for some time – and certainly before the Newcastle takeover was completed. The league remains involved in a long-running investigation into whether City have broken financial fair play regulations. City deny wrongdoing. The rule change under discussion, although temporary, is an aggressive move and not without risks. The clubs seem to have taken a safety-in-numbers approach. It is unlikely that Newcastle would have concluded any major commercial deals inside the next month but their rivals wanted to make their point, to indicate a direction of travel.

What will happen when the month is up?

There is the potential for a vote on a permanent rule change – surely not a ban on related party transactions but legislation to ensure they would be transparent and paid at fair market value. The league will set up a working party – comprising a cross-section of clubs – to shape a consensus view. Newcastle have been invited to join. The worst-case scenario would be if Newcastle, or any other club, ended up on the wrong side of a further vote. Would it be the prompt for a legal challenge?

Why are the clubs so worried about Newcastle and related party transactions?

Because some of them, to put it bluntly, are paranoid about the success that City have enjoyed since being bought by Abu Dhabi’s Sheikh Mansour in 2008. They have watched City strike deals with companies linked to the emirate and have decided that they have offered the springboard to glory – and not the many football decisions the club have got right. There is an undeniable feeling that some clubs do not want Newcastle to “do a City”. It should be noted that City were cleared last year at the court of arbitration for sport of “disguising equity funds as sponsorship contributions”. City maintain that related party or otherwise, their sponsorships have been of fair value.

What are the prospects of Newcastle spending heavily straight away?

It is permissible within the league’s profit and sustainability rules that Newcastle could invest more than £150m on signings in the next year, beginning in January (with the usual caveats about that being a difficult window). This is because the club spent little under the previous owner, Mike Ashley, which has given them a credit within the rules of at least £45m. In addition, clubs are allowed to make losses of £105m over a rolling three-year period. It would be a risky strategy to effectively spend it all at once and it would mean they would have to be certain of being able to break even in years two and three. 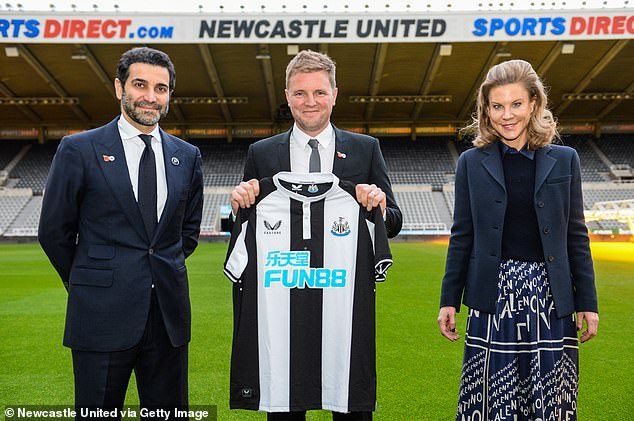