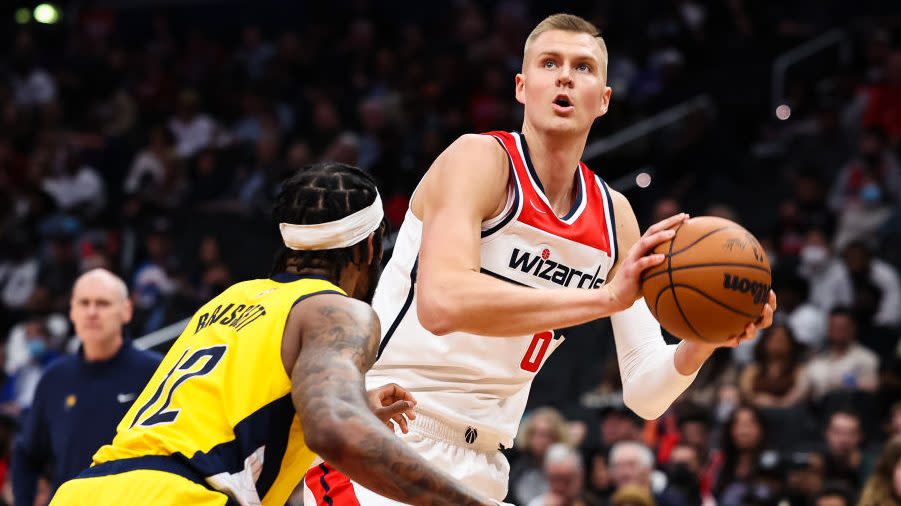 Three Things is NBC’s five-days-a-week wrap-up of the night before in the NBA. Check out NBCSports.com every weekday morning to catch up on what you missed the night before plus the rumors, drama, and dunks going that make the NBA great.

When he plays, Kristaps Porzingis is very good.

Porzingis made his Wizards debut Sunday and looked exactly like the guy Washington wants to pair with Bradley Beal next season: 25 points, 5 rebounds, a couple of blocked shots, all in just over 21 minutes of action.

The Wizards looked for Porzingis on their first possession.

And by the end were throwing him lobs.

This is the Porzingis the Wizards hoped for when they made a trade for him at the deadline. In a key sense the trade has already worked, with Beal saying it’s “fair” to say he is leaning toward re-signing with the Wizards. Around the league, there is a sense Beal is largely off the table as a free agent and isn’t going anywhere this summer.

If Porzingis (and Beal) can stay healthy and play 65+ games on a roster filled with quality role players such as Kyle Kuzma, Kentavious Caldwell-Pope, Rui Hachimura, Deni Avdija and others, this should be a playoff team next season, even in the deep East.

This season, it’s still a longshot the Wizards make the play-in, but this win leaves them two games back of the Hawks/Hornets/Nets, who are in a virtual tie for the 8/9/10 seeds right now. Never say never.

“If” Porzingis stays healthy is the key to any postseason dreams, this year but especially next. He missed the entire 2018-19 season with a torn ACL, missed 15 games the bubble season, played 43 last season, and Sunday made it 35 games this season. Keeping him healthy and on the court has been the issue that frustrated the Mavericks and had them ready to move on.

But when he plays, Porzingis looks like an All-Star.

The Boston Celtics head toward the playoff on a hot streak having won 14-of-16, most of that on the back of the best defense in the NBA.

Come the playoffs, the only question is can the Celtics score enough points? If so, they are a threat to come out of an East that is deep but lacks the one elite team everyone is chasing and fears.

Enter Jayson Tatum. In a playoff-intensity game against a Nets team with two-thirds of their stars, Tatum was the best player on the court and dropped 54 points.

Tatum and Jaylen Brown were hitting clutch shots down the stretch — that could be enough offense. The Celtics had a 129.1 offensive rating against the Nets Sunday, and while that’s just one game against the 23rd ranked defense in the league, it’s a sign of the potential in Boston.

Finally getting healthy, Brooklyn needs to win some games. They are now in a virtual tie with the Hawks and Hornets for the 8/9/10 seeds in the East — not exactly where we thought this season would go for them.

This is the biggest pro basketball story of the weekend, and we are all wishing for Brittney Griner’s safe return.

We have a story with the details on what happened here, but the short version is this: Griner is in custody in Russia after vape cartridges containing hashish oil were found in her luggage at the Sheremetyevo Airport, just outside Moscow.

The arrest was made in February when Griner entered the Russian airport, according to the statement from the Russian Federal Customs Service. An exact date was not specified. That statement goes on to say a criminal case has been opened into the “large scale” transportation of drugs, a charge that can carry up to a 10-year jail sentence.

Griner, a member of the WNBA’s Phoenix Mercury, has played for the Russian team UMMC Ekaterinberg during the WNBA offseason for several years. WNBA players commonly play for a second team because those European and Russian teams often pay far better than the WNBA (Griner reportedly makes more than four times her WNBA max salary from her Russian club). The Phoenix Mercury and USA Basketball released these statements:

Griner’s arrest comes amid a backdrop of high tension between the United States and Russia following Russia’s invasion of Ukraine.

See also  Atkinson to have third interview, frontrunner to be Hornets coach

For more details on Griner’s detainment, follow this link.

Highlight of the Night: Big Baby gets caught trying to sneak courtside

This was funny because we’ve all been nailed when trying to sneak into better seats.

The broadcast of Boston’s win over Brooklyn got a bit of comedy relief in the third quarter when ABC cut to Celtics champion Big Baby Davis — just as someone caught him sneaking into courtside seats and tossed him out of them.

Hey Celtics, he’s a champion — hook the man up.