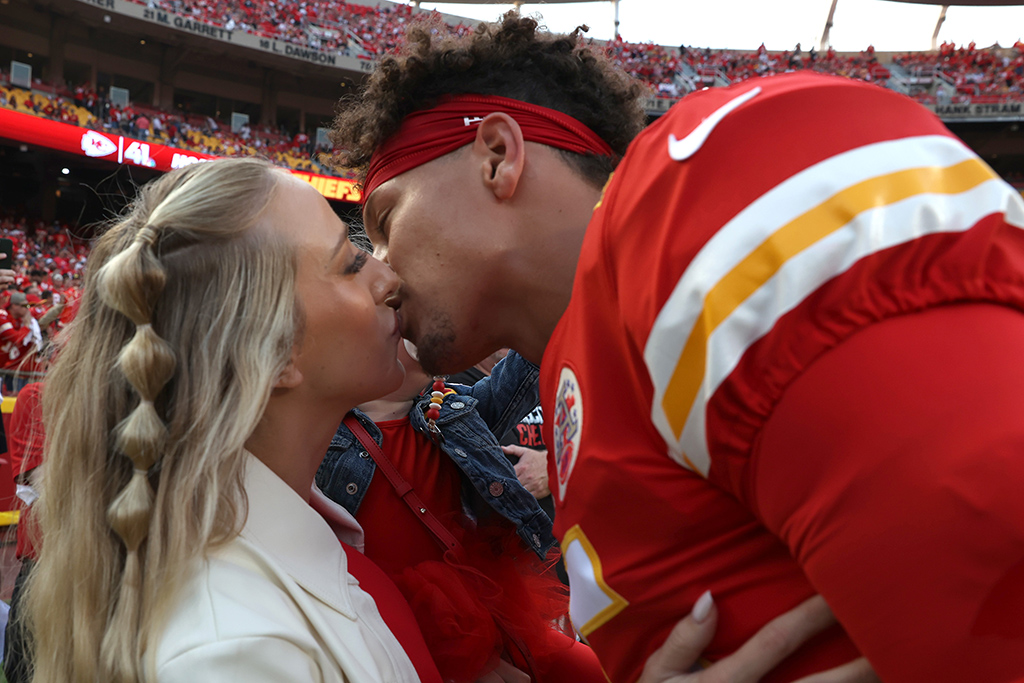 Brittany Matthews took her one-year-old daughter Sterling to watch her first game and support husband Patrick Mahomes. The Chiefs’ quarterback and his team played against the Los Angeles Chargers at Arrowhead Stadium on Sept. 15 in Kansas City, Mo.

The mother-daughter duo was clad in red, yellow, and white clothing with designer accessories and custom shoes, showing their support for Mahomes during the game. Matthews wore a white long sleeve mid length button up, which she wore over a bright red jersey dress that accentuated her ever-growing baby bump. She described the outfit as “bumpin” on her Instagram stories.

The fitness enthusiast paired her casual clothes with a bright yellow Jacquemus cross-body bag and styled her long blond hair down and out of her face, a section of her hair parted into a side swept bubble braid.

While Matthews’ shoes aren’t visible, the mother of one tends to gravitate towards shoe choices with tonal suede and leather uppers, which can easily be worn with outfits ranging from dressy to casual — much like new styles from a variety of brands, including Allbirds, Cariuma and Valentino.

Matthews often elevates her outfits with versatile formal and casual footwear. On dressier occasions, she can be seen in strappy or ankle-wrapped stiletto sandals in hues of black or metallic tones — and even bow-topped pumps by Mach & Mach. Her casual outfits often include sneakers and tall leather boots.

In a similar fashion, Matthews’ daughter Sterling twinned with her mother, the toddler clad in a poofy tulle red dress which she wore under a custom blue denim jacket with her dads name and jersey number on it in the football teams colors. The baby matched with her mother down to her very own mini Jacquemus crossbody in red Speaking of custom, the one-year-old wore one of a kind red and white sequin Kansas City Chiefs Converse.

PHOTOS: Check out eight of the most stylish football players.