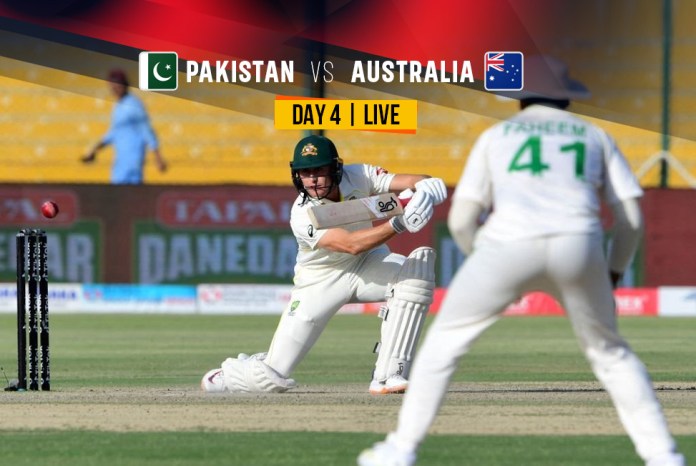 PAK vs AUS LIVE Score – Karachi Test LIVE Updates: Australia will resume Day 4 at 81/1, with already a commanding lead of 489 runs. The question everyone would ask Australian captain Pat Cummins is – when is the BIG-DECLARATION coming in? Marnus Labuschagne (37) and Usman Khawaja (35) are at the crease and Australia is likely to look for 550 plus before declaring – Follow Pakistan vs Australia LIVE Updates with InsideSport.IN

Also READ: ICC Test Rankings: Rohit Sharma’s Indian Team moves to TOP of ICC Test RANKINGS, but the stay can as short as 24 HOURS, CHECK WHY?

PAK vs AUS LIVE Score – Karachi Test LIVE Updates: Australia completely dominated Day 3 of the ongoing second Test of the three-match Benaud-Qadir Trophy against Pakistan at the National Stadium in Karachi on Monday. When stumps were drawn for the third day’s play, Australia were 81 for one in their second innings after they had earlier declared their first innings at 556 for nine in 189 overs and then took 53 overs to skittle out Pakistan for 148.

See also  Is Virat Kohli Australia’s biggest thorn in the flesh? Check out his insane numbers against World Champions

Usman Khawaja on 35 and Marnus Labuschagne on 37 will resume Australia’s second innings on Tuesday with the tourists enjoying a commanding 489 runs lead and eight-second innings wickets in hand. National Stadium was considered Pakistan’s happy hunting ground until the 34th Test when they suffered their first defeat by six wickets against England in 2000. Four Tests later in 2007, South Africa won the Test by 160 runs and now, 15 years and three Tests later, third defeat looms large for Pakistan.

Australia, after making Pakistan bowlers toil for the first two days, resumed on Monday at the overnight score of 505 for eight and added 51 runs in nine overs to declare at 556 for nine. Skipper Pat Cummins, who was yet to get off the mark, finished unbeaten on a 36-ball 34 with two fours and three sixes, while last-man Mitchell Swepson returned not out on 15.

Rawalpindi Test centurions Abdullah Shafique, Imam-ul-Haq and Azhar Ali made fatal errors that put pressure on the unexposed middle-order that ultimately resulted in the crumbling of the middle-order against a world-class and accurate bowling attack. With Pakistan 118 for nine, Nauman Ali (20 not out) and Shaheen Shah Afridi (19) added 30 runs to help the home side reach 148. The fact that the last-wicket partnership of 30 runs was the highest of the innings tells a sorry tale of Pakistan’s innings.

After securing 408 runs first innings lead, Australia decided against enforcing a follow-on and scored at a run-rate of 4.76 to complete a satisfying day at 81 for one. With a lead of 489 runs already in the bag, Australia are expected to bat in the first session before pushing for victory by putting Pakistan into bat who can save their blushes by putting up an improved batting performance.