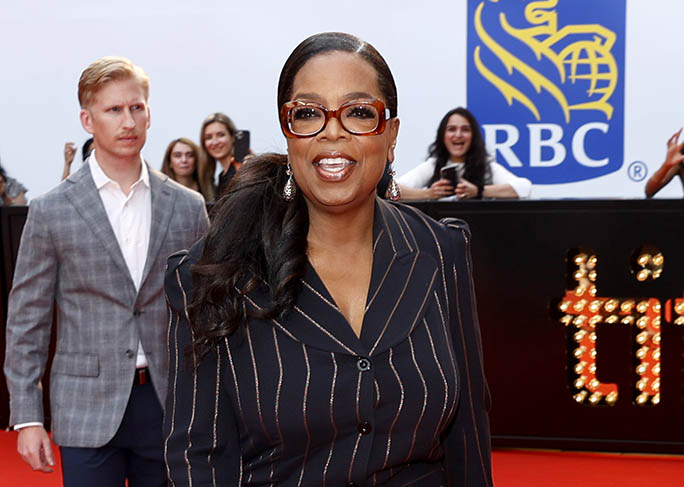 Oprah Winfrey arrived in sharp sleek style at the Toronto International Film Festival on Sunday. The Emmy Award-winning talk show host attended to support her close friend Tyler Perry at the premiere of his new movie, “A Jazzman’s Blues.” The film is an epic tale about love and loss with a strong musical.

Winfrey made a refined statement on the red carpet at Roy Thompson Hall. She stepped out in a black power suit that was streamlined with gold pinstripes throughout. The ensemble consisted of a cropped blazer and matching wide-leg trousers. The top had a V-neckline, wide lapels and fitted waistband.

For glam, the Tony Award winner went with neutral makeup and a glossy pout. Winfrey styled her hair in a side ponytail and accessorized with dainty drop earrings and red square frames.

Completing the philanthropist’s look was a pointy silhouette that peaked out underneath her pants. The shoe style had a black triangular toe and PVC uppers.

The 2022 Toronto International Film Festival (TIFF) celebrates the art of Canadian cinema. Held from September 8-18, this year’s Festival features a diverse lineup of films, including “The Woman King,” “Weird: The Al Yankovic Story,” “The Fabelmans,” “My Policeman,” “Bros” and “Butcher’s Crossing.” The occasion also includes the TIFF Industry Conference, which features panels with different industry members and celebrities on the business and art of filmmaking.

PHOTOS: See what other celebrities wore to the 2015 Toronto International Film Festival.