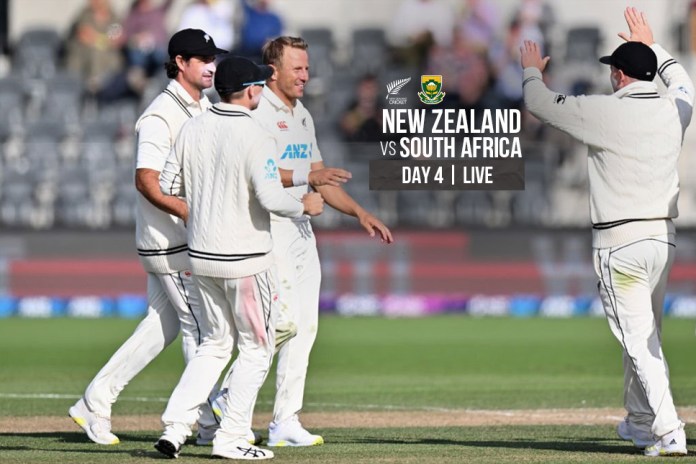 NZ vs SA LIVE: South Africa will hope that their lower middle order and the tail can add some crucial runs after New Zealand fought back into the game after a fine performance on Day 3. South Africa were all over the hosts on Days 1 and 2, but Colin de Grandhomme’s career-best hundred and some fine bowling from Tim Southee and Neil Wagner meant that the Kiwis are still in the hunt for a historic series win over South Africa. Follow Insidesport.in for all NZ vs SA LIVE Updates.

After being outplayed for two days, New Zealand held hope they could salvage the second Test as they reduced South Africa to 140 for five at stumps on day three in Christchurch on Sunday. It gave the Proteas an overall lead of 211 with five wickets remaining after posting 364 in their first innings and then bowling New Zealand out for 293. But there has been a momentum shift in the Test after South Africa dominated the first two days.

Day three went New Zealand’s way after they were rescued from 91 for five by a 133-run stand between Colin de Grandhomme and Daryl Mitchell on a docile wicket. When South Africa started their second innings 71 runs ahead, New Zealand needed quick wickets and Tim Southee and Matt Henry obliged to have the tourists 38-3.

A Southee inswinger beat Sarel Erwee’s bat and trapped the opener in front after he had scored eight off nine deliveries. Southee then removed Dean Elgar who was smartly caught one-handed by wicketkeeper Tom Blundell diving in front of first slip and was gone for 13.

Aiden Markram faced 25 balls before getting off the mark and gradually advanced to 14 before Henry, on a day when the short ball has been favoured, pitched up a yorker and Markram was bowled.

Rassie van der Dussen (45) and Temba Bavuma (23) steadied the South African innings with a 65-run stand in which van der Dussen was particularly hard on Neil Wagner as New Zealand’s short-ball specialist tried to tempt the batsmen into the hook shot.

He took 13 off one Wagner over and in the process took a little gloss off what was otherwise an outstanding day for de Grandhomme who top-scored for New Zealand with an unbeaten 120.

After taking 10 runs off three balls, van der Dussen popped a straightforward chance to square leg and as Wagner began to celebrate, de Grandhomme dropped the ball. However, Wagner won the battle five runs later when he had van der Dussen caught and bowled and followed up with the dismissal of Bavuma.

New Zealand had resumed the day at 157 for five and with de Grandhomme leading the charge they put on 136 in 35 overs. The Zimbabwean-born all-rounder produced his Test-best with an unbeaten 120 while Mitchell made 60.

Elgar turned to Wiaan Mulder to snap their century partnership but he lasted one over after de Grandhomme smacked back-to-back fours which led to the introduction of Keshav Maharaj who did make the breakthrough.

Mitchell had looked comfortable against the pace bowlers but was less certain against Maharaj’s spin. After edging one ball short of the sole slip, he played outside the line to the next and was trapped plumb in front. Kagiso Rabada and Marco Jansen mopped up the tail with Rabada taking five for 60 and Jansen four for 98.

How To watch NZ vs SA Live Streaming in your country, India?
Fans from India can watch it live on Amazon Prime Video.

What are the venues for NZ vs SA2nd Test? – Venue
NZ vs SA 2nd Test will be played in New Zealand Hagley Oval.