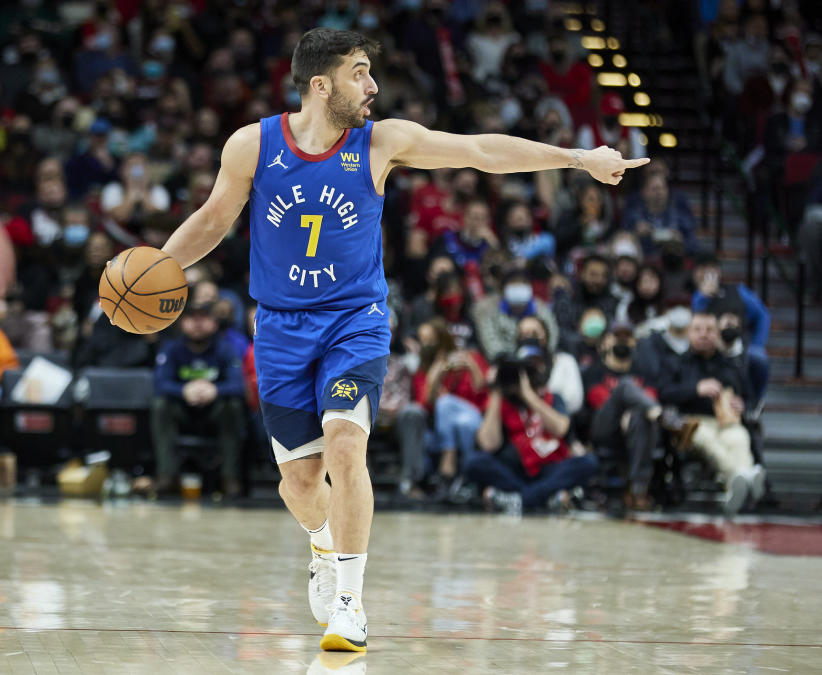 PORTLAND, Ore. (AP) JaMychal Green had 20 points and 10 rebounds off the bench and the Denver Nuggets pushed their winning streak to six games with a 124-92 victory over the Portland Trail Blazers on Sunday night.

Nikola Jokic had 18 rebounds, 11 assists and eight points before sitting for good with 2:22 left in the third quarter.

DeMarcus Cousins, signed by the Nuggets for the rest of the season on Friday, added 19 points and eight rebounds, and Denver’s bench finished with a season-high 76 points.

Anfernee Simons had 16 points to lead the Trail Blazers, who were coming off a loss to the Warriors on Thursday that snapped a four-game winning streak.

Denver led by as many as 20 points. Although the Nuggets looked sluggish at times playing the second of a back-to-back, the smaller and less experienced Blazers’ lineup couldn’t match them.

Justise Winslow, who started for the Blazers in a loss to Golden State on Thursday, did not play because of a sore Achilles. He was replaced in the starting lineup by Keon Johnson, a 19-year-old rookie acquired by the Trail Blazers in a trade with the Clippers on Feb. 4. It was Johnson’s first career start.

The Blazers also started Drew Eubanks, signed to a 10-day contract earlier in the week when Portland announced that center Jusuf Nurkic was battling plantar fasciitis.

Portland is still missing Damian Lillard, who is recovering from abdominal surgery. The Blazers announced Sunday that their six-time All-Star had progressed through the first phase of his recovery, and that he will be reevaluated in two to three weeks after a reconditioning protocol.

The Nuggets went on an 18-4 run to start the second quarter and pushed their lead to 50-31. The Blazers never threatened.

NO REST FOR THE WEARY

The Nuggets are in the midst of playing three games in four days. They were coming off a a 115-110 victory at home over Sacramento on Saturday night. On Thursday, they beat the Kings on the road, 128-110.

So facing a Blazers team with its rotating injured and traded players was a challenge, Denver coach Michael Malone said.

”We went through the personnel this morning and told the guys to be locked in because this is a completely different team than we played the first three times, and they have players you’re probably not familiar with,” Malone said.

Nuggets: Denver won two of the previous three games with Portland this season. … Jokic is ranked seventh all-time with 73 triple-doubles. He had one a night earlier in the Nuggets’ win at home against Sacramento (18 points, 11 assists and 10 rebounds) for his ninth triple-double in his last 19 games.

Trail Blazers: Both Lillard and Nurkic watched from the Blazers’ bench in street clothes. Portland has used 22 different starting lineups this season.