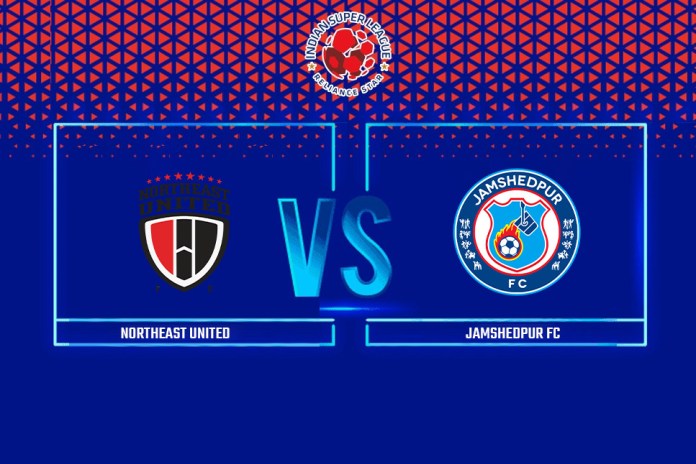 NEU vs JFC: Jamshedpur FC will look to secure their maiden semifinal spot with a win over NorthEast United FC when the two sides meet in the Hero Indian Super League at the PJN Stadium in Fatorda on Friday. Follow all the ISL 2021-22 LIVE Updates only on InsideSport.IN

Jamshedpur are seated second in the points table having 31 points from 16 matches, four adrift of leaders Hyderabad FC who secured a semi spot last night with a win over Kerala Blasters FC. Jamshedpur, though, have played two games less than Hyderabad and Owen Coyle’s wards would eye a top spot and the League Shield besides qualifying for the last four.

“It’s always nice to hear when people say that we have attained the most wins, scored the most goals, picked up the most points but the truth is, it doesn’t count for anything until you get something tangible and that is the mission for Jamshedpur FC this season as we have never been in the playoffs to fight out for the trophy,” said Coyle on the eve of the game.

Ready for next one! ⚽

Jamshedpur have never won four straight games in Hero ISL, although they have won three straight games on four different occasions, including twice in the current season. A win in their next game would see them win four successive games for the first time in Hero ISL.

“We’ve a lot left to do even though we’ve done really well until this point, but that accounts to nothing. What we have to do moving forward, starting from going against a very good opponent like NorthEast United, is to try to win the game and collect those valuable points which will be our aim on a game-to-game basis,” Coyle said on the challenge ahead.

“NorthEast United FC are a very good team and I think they are being held back by major injuries and players missing from their squad this season. Khalid Jamil is not able to have the player continuity but when they look back to throw their strength at you, we saw their quality the other night when they came back after conceding against a very good Bengaluru side,” he added on his next rivals.

For the Men of Steel, Daniel Chima Chukwu has been in fine fettle since joining them mid-season from SC East Bengal. The Nigerian forward has scored or assisted in each of his 5 games for the Red Miners this season. Chukwu has scored four goals and one assist in his five games. Jamshedpur will miss the services of Boris and Jitendra Singh on Friday along with Jordan Murray who has been injured for some time.

For NorthEast United, a win over Bengaluru saw them snap a 10-game winless run as Deshorn Brown ran the Blues ragged with his stellar performance. With Brown now fit and Marcelinho also in his elements, Khalid Jamil’s side will be a handful for Jamshedpur added that they have nothing to lose at 10th place with just 13 points from 18 matches.

“Brown is one of the best players in the league. You can see in the last game, we got three points in the last game and he played a big role. If we had him fit for more time, we could have done better. He is a great professional and a leader in the team. It is a pleasure to work with him,” said Jamil on Brown. The last time the two teams met, Jamshedpur edged past NorthEast United 3-2.

Both the teams have faced each other a total of nine matches in the Indian Super League. Jamshedpur FC have the upper hand with three wins whereas NorthEast United have only won once. While the other five matches have ended in stalemates.

The first leg of this fixture ended in a five goal thriller with Jordan Murray, Boris Thangjam and Ishan Pandita getting onto the scoresheet for the Men of Steel. Deshorn Brown retaliated with a brace but it was not enough in front of Pandita’s last-minute strike.