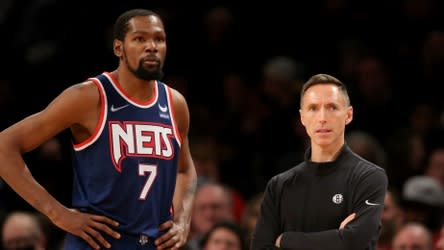 As the Brooklyn Nets enter the final stretch of the season, Kevin Durant is looking closer and closer to a return from injury.

Prior to Monday’s game against the Toronto Raptors, head coach Steve Nash revealed that Durant will not play tonight or tomorrow’s back-to-back against the Raptors and was “hopeful” that his All-Star can play this week, specifically Thursday or Sunday.

The Nets will host the Miami Heat on Thursday, Durant’s first potential game back, and travel to Boston to face the Celtics on Sunday.

Ben Simmons, the newly-acquired Net, won’t be making his team debut this week as he nurses a sore back, according to Nash.

Nash also gave an update on Joe Harris, who has missed the majority of the season after ankle surgery.

“We’re waiting to see how he responds, so there’s no decisions made either way,” Nash said.

The Nets started the second half of the season with a 129-106 loss to the Boston Celtics before an impressive 126-123 victory over the Milwaukee Bucks. Brooklyn sits as the No. 8 seed in the Eastern Conference. With a tough slate of games coming up, and a limited number of games to get everyone playing together, the Nets need their top players on the court before the playoffs begin or they may not make the postseason.

Brooklyn hosts the Raptors Monday night before traveling to Toronto on Tuesday.