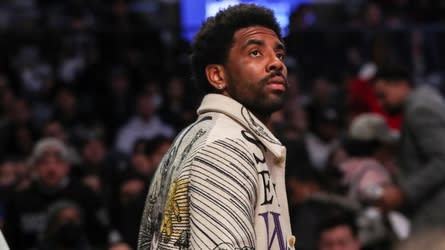 The Nets have been fined by the NBA for violating New York City’s local healthy and safety protocols after Kyrie Irving entered the team’s locker room at halftime against the Knicks on Sunday, the league announced.

Irving was sitting courtside instead of suiting up as NYC’s mandates have not changed except that you don’t need to provide vaccine information to be able to attend events.

Fellow teammate Kevin Durant had some words to say about that situation that doesn’t allow Irving to play home games, calling out mayor Eric Adams to “figure this out.”

“It’s ridiculous. I don’t understand at all….I don’t get it,” Durant told reporters after his 53 points led to a Nets victory. “It just feels like, at this point now, someone is trying to make a statement or point to flex their authority.

Everyone out here looking for attention and I feel like that’s what the Mayor wants right now. He’ll figure it out soon, he better. It just doesn’t make sense. There’s unvaxxed people in the building already. Are they fearing our safety? I don’t get it. Hopefully… Eric [Adams] you got to figure this out.”

Durant has since released a statement saying he does “appreciate the task the Mayor has in front of him with all the city has been through. My frustration with the situation doesn’t change the fact that I will always be committed to helping the communities and cities I live in, and play in.”

Irving can only play four of the final 14 games of the season for Brooklyn. And it gets even more complicated if the Nets have to play the Toronto Raptors during the play-in tournament like they’re lined up to at the moment considering Canada doesn’t allow unvaccinated players to even travel there.