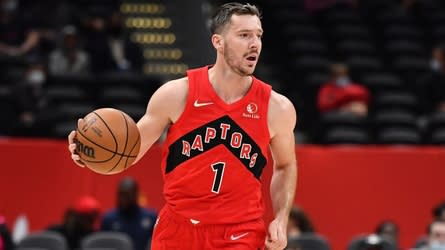 The Nets are among several teams that plan to pursue veteran guard Goran Dragic after he is bought out by the San Antonio Spurs, according to ESPN’s Adrian Wojnarowksi.

Dragic was acquired by the Spurs on Thursday from the Toronto Raptors, and they are expected to buy him out in the coming week, per Wojnarowski.

Other teams than plan to go after the 35-year-old include the Los Angeles Lakers, Golden State Warriors, Los Angeles Clippers, Milwaukee Bucks, and Chicago Bulls.

Dragic played in just five games with the Raptors this season. They eventually mutually agreed to allow him to work out away from the team and tried to find a trade. He played the first four games of the season, and then missed the following nine games, before suiting up for the last time on Nov. 13, 2021 against the Detroit Pistons.

Wojnarowski reported that Dragic has been staying in shape through workouts in South Florida during his time away from the Raptors.

“Dragic is emerging as the top player on the buyout market, with contending teams confident that he has stayed in excellent condition working out in South Florida and can contribute in short order on a new team,” Wojnarowksi said.

The 2008 second-round pick is currently in his 15th NBA season, having previously played for the Phoenix Suns, Houston Rockets, and Miami Heat. He helped guide the Heat to the 2020 NBA Finals, averaging 21 points per game over 15 games in the Eastern Conference Playoffs.